Revealed: The 10 Ski Runs That Deliver the Best Skiing in Austria 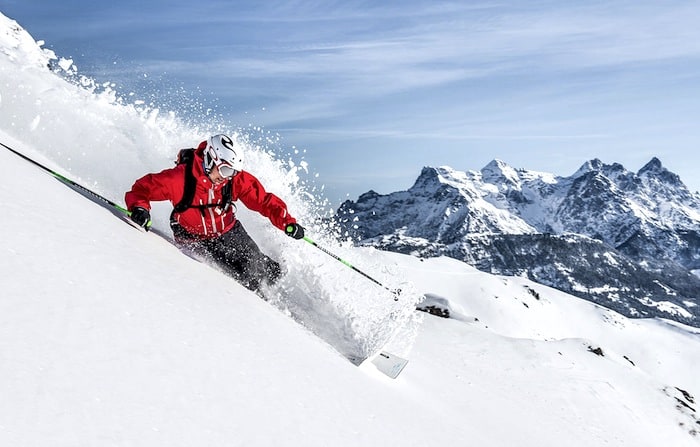 Andy Perrin started out as a resort rep in St Johann in Tirol in the 1980s in a bid to improve his German and learn how to ski. Today he is Chairman of Hotelplan UK – the parent company of specialist ski companies Inghams, Esprit Ski and Ski Total. Since those early days in the Tirol, he’s set his edges to snow on pistes all over the world. But Austria remains close to his heart.

There’s something special about Austria. This is a country where every man, woman and child seems to own a pair of skis and knows how to use them. Where World Cup ski racers are more famous than footballers, and being out in the mountains seems as natural as a shopping trip to the local supermarket. It always feels to me like I’m skiing the heartland when I’m there, and I always seem to raise my game as a result.

It helps that there are some really cracking pistes here, too. These are my personal favourites, but I’d love to hear from anyone who’d like to add to the list. There’s a comments box at the end of the article: please add your suggestions.

Together, pistes 3a and 4a will take you from the top of the 1700m Harschbichl all the way down to the Eichenhof base – and despite the unimaginative names, they add up to fantastic descent. I used to live in St Johann, at the base of the Eichenhof lift, and on New Year’s Day many moons ago I was up on the first lift after a good foot of snow fell overnight.

The piste-bashers were only just starting up, and I managed two full top-to-bottom runs in perfect untouched powder. Because all the guests were in bed, sleeping off the night before, I was virtually alone, too.

Wow Factor: Best off-piste I ever skied on a mono board – which gives you some idea of the date!

Ow Factor: Considerable, if you try to ski it on New Year’s day with a hangover.

This red run starts from top of Palinkopf in Austria, and ends up in Samnaun in Switzerland. There’s something strange and wonderful about skiing two countries on a single piste, but this run is a beauty in its own right – a long and scenic descent, with the promise of Rosti with an egg on top for lunch at the bottom.

Ow Factor: Samnaun is famous for its duty-free shopping. So you might find your rucksack is a little heavier on the return leg back to Ischgl.

This is the real name of the famous race course on the Hahnenkamm above Kitzbuhel – the toughest downhill on the World Cup circuit.

I have never quite done it in style, but it remains one of the iconic challenges. Stopping and looking down from the top of Mausefalle (the Mouse Trap) is one of those moments that gives you some measure of the incredible courage of the top downhill racers.

Wow Factor: Didier Cuche secured the first of his five Downhill victories here in 1998. Victories in 2008, 2010, 2011 and 2012 finally completed his Kitzbuhel-Collection, setting a new record in the process for the race that the great Austrian Franz Klammer made his own in the 1970s. So severe is the G force on a couple of turns that it once ripped the binding – screws and all – from his ski.

Ow Factor: Much the most difficult part is the Steilhang with its cruel reverse camber. “The turn down into it is definitely the hardest in any downhill because it goes on for so long, and because the slope runs away from you as you try to get round,” said ex-racer Martin Bell.

Leading from top of the Wurmkogel lift in Hochgurgl, pistes 26 and 26a are relaxing cruisey blues, with a treat at the summit before you start – the Top Mountain Star, a mountain restaurant and look-out point with one of the most glorious views in the Alps. From here, you can see south across the Italian border to the rose-coloured crags of the Dolomites.

Ow Factor: When the visibility’s good, this is about as stress-free as skiing gets. But tackle it in low cloud, or when it’s snowing and you’ll be skiing by sense of smell.

The run above the old spa town of Badkeinkirchheim (or BKK as it is also known) is a wonderful piste with lots of rollers. Best of all is to ski the run with the great man himself on one of his regular guiding days.

But don’t be surprised if you’re cruising down at what you think is your maximum speed, when a voice in your ear gives you a bit of technical advice. Klammer seems to be able to accelerate and slow down at will, while you have only one speed.

Wow Factor: Sign up with the BKK Tourist Office to be one of the 25 people chosen to ski with Klammer twice a season – all you need is a lift pass…

Ow Factor:…but if you get picked you’ll need to ski like a rocket to keep up with him.

It’s hard to pick just one run in the massive Arlberg area, and I’d definitely count the lovely scenic descents above and through Oberlech as favourites. However the best is probably the red 13/14 from the top of the Schindler Spitze, above St Anton, down to St Christoph; which always seems to be covered in top-quality snow.

Wow Factor: Sublime scenery with the gorgeous little village of St Christoph at the end of the run.
Ow Factor: The names of the pistes are Valfagehrjoch and the Pfannenbach. No wonder most people refer them by their numbers.

I love these two runs, that go from the top of Schmittenhohe cable-car all the way down to Zell am See. Don’t be put off by the black designation of the lower, Trassabfahrt piste, by the way – when the snow’s good, this is a run that any competent, athletic intermediate skier will love.

Ow Factor: It can be icy first thing in the morning. Try to ski it when a fresh dump of snow has been freshly groomed into its surface.

Two things mark this wonderful piste out. The first is the fact it will take you all the way from the summit of the 1820m Choralpe, down to the valley floor – a proper, top-to-bottom blast that lets you ski an entire mountain in one go, without having to catch a lift or endure any boring traverses.

Second is the fact that for much of its length it follows the fall-line straight down the slope. You scoot along the top for a bit, hang a left, and then – hallelujah – the piste plummets straight downhill, with the distant flatlands at the bottom framed between an avenue of trees. When the snow’s good, it’s one of the most enticing sights I know in skiing.

Oh yes, and for much of its length it’s a red too, so most intermediates will be able to tackle it once theyíve got their ski legs (and fitness) back – especially if they follow the short detour around the short, steeper black section in the middle.

Wow Factor: On its day, when the snow’s good, this might just be the best red-rated piste in the world…

Ow Factor:…but not if you’ve just guzzled a big pan of Tiroler Gröstl for lunch in one of Westendorf’s cosy mountain restaurants, which case it’ll feel like someone’s attached lead weights to your legs. Ski it after a mid-morning cup of coffee instead.

Everyone’s heard of Harakiri, Mayrhofen’s signature white-knuckle black, which tumbles down the back of the Knorren, in the Penken ski area. It’s a short, sharp run which is a lot of fun when the snow’s soft, but will unnerve many a skier when it’s icy. And it’s often icy. The steepest bit is near the bottom, by the way. Just when you think you’ve cracked it and the end is in site it can all go cartwheelingly wrong.

Devil’s run, nearby, is completely different. It’s steep enough to be a challenge, but also steady and measured enough to allow you to find your rhythm and enjoy your turns. The only drawback is that it gets a lot of sunshine. So make sure you hit it at the right time of day if you’re skiing in the spring or during a thaw – which is when the mid-morning sun has had a chance to soften its surface, but before it gets too slushy.

Wow Factor: This is fall-line skiing at its best.

Ow Factor: This is definitely not a piste to be skied mid-afternoon in a thaw. Your knees will be pointing backwards by the time you get to the bottom.

Niederau has a reputation as a beginner’s resort. So it’s a surprise, and a delight, to find Black 15 (aka the Hochbergabfahrt) here – a former FIS-rated downhill course which drops off the steep, shadowy wall immediately above town.

Because it faces due north and gets very little sun, there’s snow here in even the most miserable winter, and the lower section is steep, sinuous, and deeply satisfying.

Wow Factor: With so many first-timers in town, it’s rare to find more than a couple of other skiers on the piste as you come down. You can make your turns as wide and extravagant as you like.

Ow Factor: The only drawback is that Niederau is a (free) bus-ride away from the core of the Ski Juwel lifts and pistes above Auffach and Alpbach. But it’s well worth making the detour.

See also Welove2ski’s features on 10 Great Ski Runs in Austria You Might Not Know About and the 10 best ski runs in France.

Andy Perrin started as a resort rep in Austria in the 1980s in order to improve his German and learn how to ski. Today he is Chairman of Hotelplan UK – the parent company of ski specialists Inghams, Esprit Ski and Ski Total. For more information, head to inghams.co.uk.

10 Responses to “Revealed: The 10 Ski Runs That Deliver the Best Skiing in Austria”