Once two separate villages, Crans and Montana merged in the ’60s and today they are one large resort 6km long. The scenery is fabulous and the resort is also close to an airport and therefore a good weekend – as well as family – skiing choice.

In the 1890s the town of Crans Montana was a centre for tuberculosis clinics, and the emphasis on health remains today. The resort of Crans Montana has a host of hotels that contain spas, enabling their elite, older patrons to enjoy a combination of skiing, health treatments and shopping at the resort’s chic boutiques. This well-heeled, health-seeking clientele mixes with bankers from Geneva and – rather incongruously – a huge snowboarding crowd, which comes here for one of the best snowparks in the Alps.

Crans Montana sits on a sunny plateau, dotted with larches and lakes, and the view across the Rhone Valley is the most spectacular of all Alpine panoramas. However, it is sometimes hard to believe that the three towns (Amonina is the third) owe their existence to the once-pure mountain air. The urban conglomeration sprawls untidily for 6km along a busy main road, with a busy, international atmosphere. It has a wide choice of restaurants, and a good range of shops, clubs and bars. The closest airport is Sion, which is 26km away. A brand new airline, powdair, offers direct flights there from various airports in the UK.

A funicular carries skiers up to Crans Montana from the valley town of Sierre. From Les Violettes, a gondola gives direct access to the top of the ski area at Plaine-Morte. Alternative mountain access is by a gondola from the Crans end of town, a gondola from Montana, one from Barzettes-Violettes, and another from the neighbouring resort of Aminona. Once up the mountain, intermediates will enjoy the long, flattering runs. 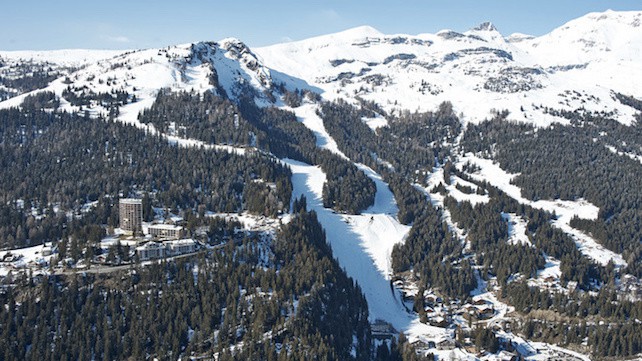 Crans Montana is an intermediate’s resort with good beginner terrain. Starting at the top, beginners have three short but easy runs on the Plaine-Morte Glacier, where good snow is guaranteed. The nursery slopes down by the golf course in Crans are even easier, but can quickly become worn.

The largest conflux of intermediate pistes is in the Violettes sector, with winding trails through the woods. The Toula chair leads to steeper reds. From Bella-Lui, head down the Nationale ski slope, which was home to the men’s downhill in the 1987 World Championships, or Chetseron, another World Cup run. The only official black run in the resort is a bumpy fall-line pitch on the ridge under the Toula chair, although by the standards of many resorts it’s no more than a red. On the whole, this is a resort of long, open cruising runs.

From snowboarding to skicross

Crans Montana is an active snowboarding centre and the Adrenaline snowpark, at top of the Crans gondola, is one of the biggest in the country. It has a half-pipe, several rails, an area for beginner freestylers, a skicross/boardercross course and a brand new snowpark for teenagers.

With a guide, a number of itineraries are possible from the Plaine-Morte Glacier. These include a descent to the lake at Zeuzier, where by walking though tunnels and skiing a summer roadway you reach the ski lifts of the neighbouring resort of Anzere.

Some 50km of Langlauf tracks in Crans Montana include a 10km loipe, set unusually at an altitude of 3000m on the Plaine-Morte Glacier. A host of other winter sports take place on the mountain and in the town, including snowshoeing, ice-skating and curling. Only about half of all visitors to Crans Montana come here to ski or snowboard.

Crans Montana has quiet, uncrowded pistes that are well groomed. It’s also known to be a fairly sunny resort, all in all making it a good place for learning to ski or snowboard. In the Crans Montana ski area there are branches of the Swiss Snowsports School (ESS) in Montana and in Crans for both ski and snowboard tuition. The individual schools are Ski & Sky, Swiss Mountain Sports and Avalanche.

Off-piste guiding is available with Louis and Christine Favre (+41 27 483 23 53), with heli-skiing through either Air Glaciers in Sion or Whitetracks.

A great place for children 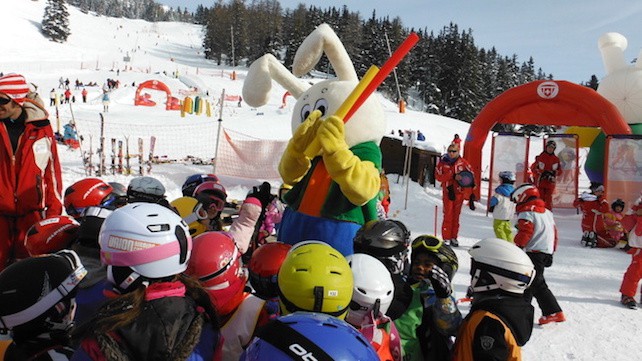 Thanks to Crans Montana’s easy skiing on sunny, mainly south-facing slopes, this is a good bet for well-heeled families. Fleurs des Champs kindergarten (+41 27 481 23 67), next to Hotel Eldorado in Montana, cares for infants from three months. Garderie Zig-Zag (+41 27 481 22 05), also in Montana, takes children between two and six years of age. ESS Montana’s Jardin des Neiges is up on the Grand Signal mid-station, whilst ESS Crans has a kindergarten next to the tubing slope.

Snow Island (+41 27 485 04 04), on the summer golf course, is a prime stopping-off point for families in winter – with tubing, easy button-lifts and a magic carpet for little skiers and for tobogganers. Here you will also find Bibi’s House with a resident clown, and activities on offer such as face-painting, balloon sculptures and other arts and crafts. The ESS Crans kindergarten is located here, and there’s a snack bar. Golfers can train indoors at the Crans-sur-Sierre Golf Club Performance Centre, whilst children can try the Happy Snow Golf target. 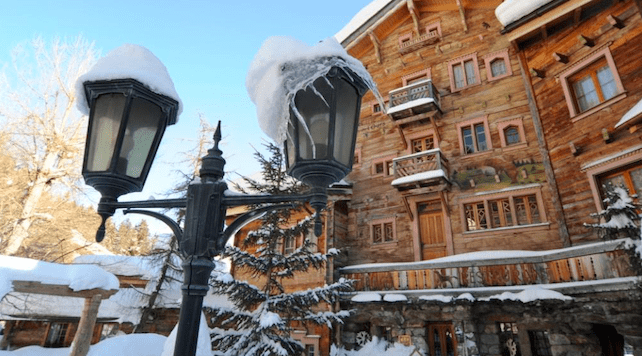 The 6km-long sprawl of Crans Montana sports an impressive number of five-star hotels. At the Crans end of town is Hostellerie Pas de l’Ours, a charming hotel appropriately decorated with a bear theme throughout. The suites and apartments are all lovely and woody, and there’s a spa with an indoor swimming-pool. The hotel is also known for its excellent gourmet restaurant presided over by renowned chef, Franck Reynaud. Also in the Crans area is the historic Hotel Royal which first opened its doors in 1932 and has been recently renovated. It has a swimming-pool, spa, and children’s playroom among its many facilities.

The Crans Ambassador Hotel is at the Montana end of town. It is has received a complete overhaul and reopens for winter 2013-14. Local architect Pierre Gervais supervised the renovation of the building, with particular attention to the choice of materials: natural stone, leather, and wooden beds – providing a look of intimate luxury. Its SPA 360° is 1300 m2, comprising an indoor swimming-pool with huge picture windows, a yoga room, sauna and Turkish bath area, and a sports hall.

Le Crans Hotel & Spa has just 15 suites, bedrooms, and apartments – each decorated in a different style, with fireplaces and natural water fountains. It also has five restaurants and bars, and an impressive spa. It receives glowing reports on Trip Advisor: “The best ski hotel I ever had stayed in my life. The service is top and the rooms and amenities like the spa are wonderful,” said one reporter, “Beautiful, ultra smart, small hotel. Very personal service. Nothing too much trouble,” said another, and “One of the finest hotels in the world” according to another reviewer. 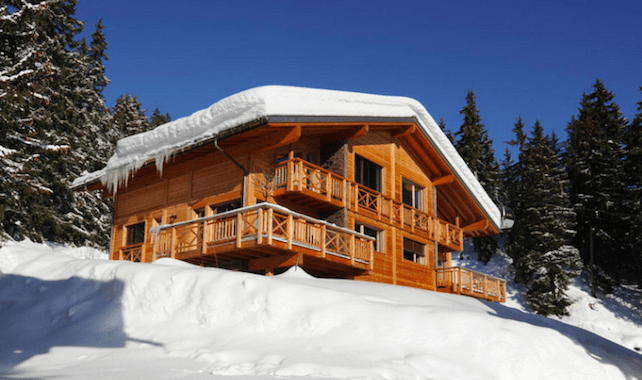 Crans Luxury Lodges are five chalets located above Les Barzettes that have all the facilities of a boutique hotel. Each chalet has a private spa, four to five individually decorated bedrooms and bathrooms, an entertainment area, dining room, kitchen, wine cellar, and open fireplace. A gourmet chef, maid service and transport are all available on demand. Chetzeron is on the slopes in a grey stone cube of a building that used to be a cable-car station. It has just five ultra-modern bedrooms.

Aida Castel is a four-star with a cosy country house atmosphere. It’s a 15-minute walk from here to the Signal gondola and 10 minutes to both the Crans and Montana centres. Hotel de la Prairie is considered to be one of the best three-stars in Montana. The simple and very traditional Hotel Ad’Eldorado is the nearest equivalent in Crans. 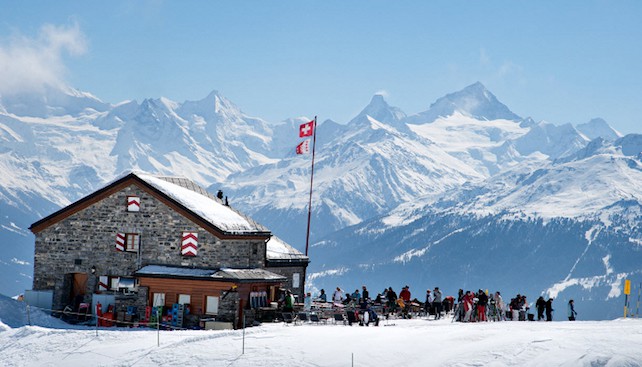 Crans Montana has over a dozen mountain eateries, including the characterful Mayen de la Cure alongside the blue run down to Aminona. The popular Merbé (+41 27 481 22 97), at the mid-station of the Crans Cry d’Er cable-car, doesn’t come cheap but it offers such delights as fresh fish, spit-roasted meat, tortellini with Alpage cheese, champignons with a baked crust, and dandelion salad. Plumachit (+41 27 481 25 32) has mushroom specialities, trout and the usual raclette. Delectable homemade cake can be found at Chez Erwin, or you could head to Chetzeron for the views.

From gourmet chic to historic recipes

Cabane des Violettes is up at 2200m and has been running since 1924. Franck Reynaud, chef at the Hostellerie du Pas de l’Ours, together with mountain guide Pierre-Olivier Bagnoud, have recently refurnished the mountain hut. In spite of the renowned chef and refurbishments, prices will remain the same, with fresh local produce on the menu.

At Plaine-Morte restaurant (+41 27 481 36 95) you can eat Valais specialities whilst watching skiers go by on the glacier. Up at Bella-Lui, the Petit-Mont-Bonvin restaurant (+41 27 485 94 75) is a family-run eatery where you can have a traditional mountain lunch or take a gondola up in the evening for a cheese fondue followed by a toboggan ride down. Chalet de Corbyre (+41 79 950 62 87) is the newest offering at Signal.

The menu at the Colombire (located in the hamlet of the same name) uses regional recipes from the past such as the hamlet’s own macaroni, Colombire cheese gratin of polenta with savory butter, and blueberry tart with homemade ice cream.

Everything from Argentinian to Lebanese 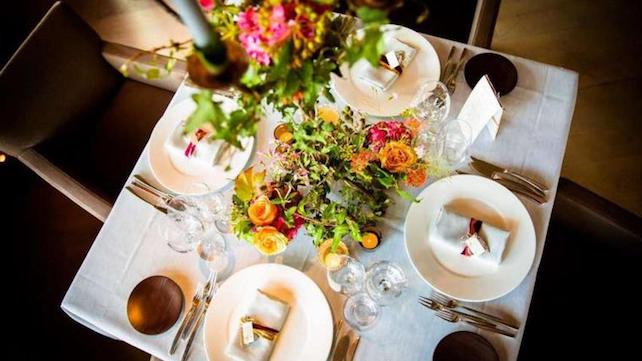 In Crans Montana itself are an astounding 90 restaurants, with food choices ranging from the local Valais cuisine to French, Italian, Spanish, Portuguese, Japanese, Thai, Lebanese (two restaurants), Turkish, Chinese and Argentinian. At the Crans end of town the most celebrated non-hotel gourmet dining is at the Nouvelle Rotisserie and the Bergerie du Cervin, which specialises in Valais-style raclette and fondue. Le Crans Hotel & Spa has eclectic cuisine by award-winning chef, Pierre Crepaud. He mixes Asian with local Valaisian in an unusual blend of flavours.

Michelin-starred Bistrot des Ours, in the Hotel de l’Ours, has splendid cuisine in an attractive dining room. In the Montana sector, the good-value Auberge de La Diligence is renowned for its Lebanese cuisine, Parrilla Argentina Sarl is Argentinian (‘simply perfect’ was how one reader described it), Edo Tokyo is for sushi, and Le Greni (+41 27 481 24 43) is excellent but expensive. Le Plaza offers ostrich steaks, bison entrecotes, and a variety of seafood. Le Chalet serves grilled meat and Rosti, and delicious puddings such as double Gruyere cream meringue, or apricot or pear liqueur sorbet.

Down in the valley town of Sierre there’s something a bit special – Chateau de Villa has 500 Grand Crus from over 70 wineries stored in its cellars, and there’s the opportunity to taste a variety of labels in the Sensorama and get expert advice. 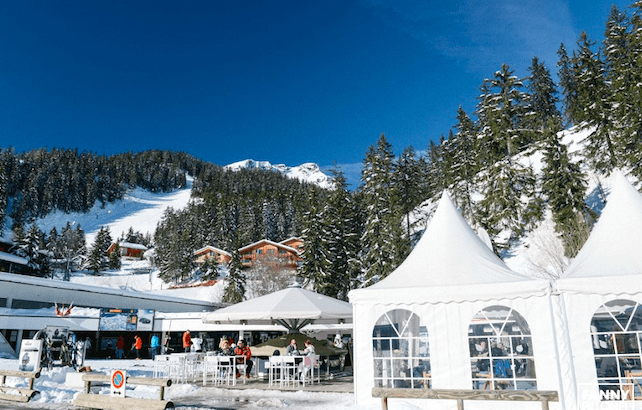 The busy resort of Crans Montana attracts an influx of wealthy weekenders from Geneva (90 minutes’ drive away). They stay at one of the smart five-star hotels (or in their private weekend pads), eat fine food and party until late.

The apres-ski starts at the base of the Violettes gondola where there’s a Big-Top-style tent housing Seven Bar (+41 27 485 89 87). This is where people stop off on the Nationale piste on the way down their last run of the day.

Brasserie La Marmotte is where to try home-made beer brewed in Crans Montana, and there are a few wine bars including – Le Tirbouchon for Valais wines, Vices & Delices (+41 27 480 44 28) for Swiss, Italian and French wines and aperitif ‘platters’, and Vinoteque in Le Crans Hotel.

The Casino is open until 5am on Fridays and Saturdays.

One Response to “Crans Montana: For Weekends, Well Groomed Pistes and Spectacular Views”