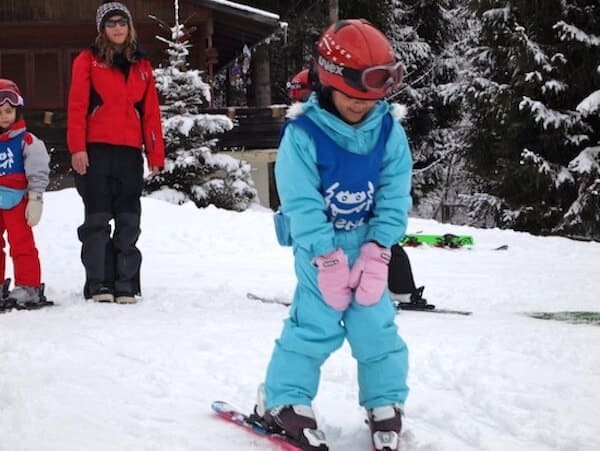 It is normal as a parent to want better for your children than you had yourself. And so as my partner and I hadn’t had the opportunity to learn to ski as children, we decided that it was high time our daughter got on the slopes.

On the first day of our family ski holiday in Laax we turned up at the Powder Byrne Yeti Club. A PB rep took us to get six-year-old kitted out in ski boots (dainty purple and white like tiny Barbie-boots), skis and that all-important ski helmet.

I now know how clunky and cumbersome ski boots feel, but she didn’t moan at all. The PB guide advised the ‘heel toe, heel toe’ method of walking in ski boots to make it easier and then it was out on to the nursery slopes for some practice.

The PB staff were friendly and humorous – which helps – and I could tell that Maya felt at home with them immediately. The group of nine children in our daughter’s group spent the morning learning to stop using the ‘pizza’ shape (pointing skis in a V) as a guide. Feedback from the first morning was ‘good strength in her legs and co-ordination’. Our six-year-old’s verdict: ‘It’s really fun when you go fast and then make a pizza shape and stop’. So far, so good.

As non-skiing parents – we dipped our toes in with a half-day private ski lesson – so we had plenty of time to watch our daughter go. We didn’t want to cramp her style but, keen to see how it all worked, my partner and I snuck in the gondola (Maya: ‘it makes my tummy hurt’) for the group’s trip up to Crap Sogn Gion (2228m high) for lunch.

I was impressed that, in a restaurant that seemed to offer chips with everything, the children were given a sensible parent-pleasing spaghetti with tomato sauce for lunch (and no moaning). After lunch they played games and everyone seemed happy and relaxed.

After lunch they went back down to the base and up the ‘magic carpet’ conveyor belt, which helps children up to the top of the ski slope before practicing sidestepping on skis. Our daughter did this several times before she took a tumble and was helped up, still smiling, by Neil. He showed her how smaller steps make the task more manageable.

By the time they clocked off at 3.30pm the verdict had changed to: ‘I love it!’ Our six-year-old could now move around on her skis, advising me ‘you mustn’t lean forward’ and that she now wanted to live here when she grows up. Her main instructors Anya and Neil, a Brit and a New Zealander, were encouraging without pushing too hard. All in all we were impressed.

By night we were all tired from the early starts (worlds away from the slothful, sun-seeking family holidays we usually take) so we booked an early dinner – an average pizza from the Camino restaurant‘s pizza oven and a well-deserved bit of Swiss milk chocolate. Tuesdays and Thursdays PB show a film in the creche but Maya fell asleep on her bed by 8pm.

The next day after a bacon sandwich and Ovaltine we marched Maya off for her second day on the slopes, her cute little PB bum bag packed with ricecakes and yoghurt drinks from the breakfast buffet. She said her legs ached a little but, after a morning spent practising yesterday’s moves with added some turning, she declared skiing ‘brilliant’.

We got Maya a burger and chips for dinner in the literally-named Burgers restaurant, which was ok but a bit heavy on the ketchup, and retired to our room at the signina hotel, part of the stylish rocksresort. Normally outraged if we dare to go out without her, she couldn’t wait to shoo us out of the door and for Emma the PB babysitter to come while we went up the mountain to La Vacca teepee restaurant.

Wednesday was family day so no skiing lessons, which our daughter sorely missed. We got up later, had a more leisurely breakfast before hitting the hotel’s slightly Eastern-bloc-style but very clean swimming-pool area for half a day. Narrowly missing a naked man in the sauna where her dad was, Maya and I lay on the poolside recliners taking in the sun, looking out at the snow-capped mountains and the new Freestyle Academy opposite.

Later we relaxed in the hotel’s bar area which turned out to be very family friendly, as its nod to all things cool and Italian has led to the owners to install a cute yellow Fiat 500 that children (adults barely fit) can pretend to drive. Not over-enamoured by the spaghetti and pizza, I ordered Maya a plate of ham and salami which went down well. But the day was most memorable for her first two teeth coming out.

After an afternoon spent playing her Nintendo DS and the board game provided by PB (alpine snakes-and-ladders) our daughter was getting a little bored – more compared to the thrill of skiing than for any other reason. She ate fish-and-chips in the resort’s Laaxerhof restaurant before reading a schoolbook and going to sleep with the promise of the tooth fairy.


Lessons Learnt By the End of the Week

Maya’s final day of skiing dawned and she woke keen to get back on the slopes. With her breakfast medley of sausage, bacon and crusty white rolls with Nutella consumed, it was off to the creche to meet the others. Maya confidently led the way with us in tow where we proudly watched as she clicked her boots into her bindings and set off up the slope, her style looking good.

By now she can control her speed, turn and stop… and in barely three days. She can ski forwards and backwards and direct herself through a series of hoops bent into the snow – and smiling the whole time. At times she just slid backwards – often with no particular place to go – just because she could. We stood beaming at our daughter – the first person in the family to ski! Now all we have to do is make sure she gets the chance for a family ski holiday each season.

Laax is famed for being snow sure and a great place for intermediate skiers but to be honest, at beginner level, so long as the resort is family friendly and the children’s area easily accessible I don’t see that the location matters. For us, rocksresort was perfect – the compact nature made it easy for us to navigate, whether getting to the nursery slopes or the restaurants and hotel.

Jo Fernandez is a leading UK travel journalist, with much of her career spent working for the London Evening Standard where she was Travel Editor until 2015. Now a freelance travel journalist and copywriter, she lives in Essex and has one daughter. She still enjoys jetting off to write travel pieces, with favourite destinations including Mexico, Philadelphia, Croatia and, of course, Essex. She runs I Love Essex, which showcases all the much-maligned county has to offer.

No Responses to “A First-Time Family Ski Holiday”