How to Teach Children to Ski 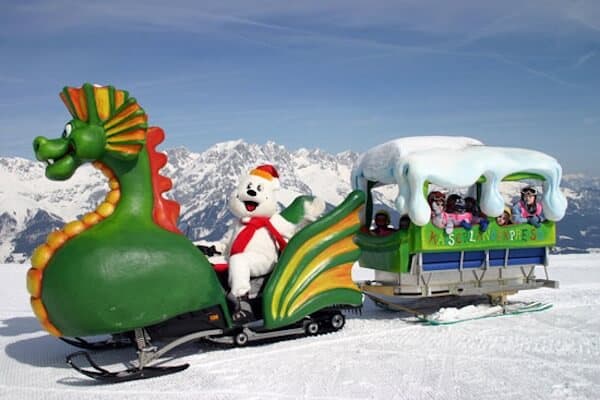 Gerhard Told has been teaching children to ski for 37 years, and his school – Kinderkaiserland, at the top of the gondola above Scheffau – is something of a landmark in the Skiwelt. Each winter, about 1,000 children take lessons there. Here he shares the secrets of his success.

“Children have to be able to look at you, and believe in what you’re telling them to do,” says Told. “And they’ll only do that if they like you.” So he picks his instructors with care. “How well an instructor skis themselves is irrelevant. I don’t care if once upon a time they raced the Hahnenkamm. They must be kind and patient.”

‘If you want your child to be a ski racer, you can’t really start them soon enough,” says Told. “It has to be second nature to them, almost like walking. By the age of ten they can already be really good skiers.”

But if you’d just like your children to ski well, then Told reckons somewhere between four and six years old is the right time, depending on the child. A key factor is whether or not they’re used to being in a group without their parents – no problem for most British kids by the age of four, but more of an issue for Austrians and Germans.

However, a lot of keen skiers like to get their children started at the age of three, and Kinderkaiserland runs lunchtime taster sessions to give the wee’uns the gentlest possible introduction to the sport.

3. Break them in gently

Kinderkaiserland runs a lunchtime programme which gives two to four year olds the gentlest possible introduction to the idea of skiing. It lasts just 45 minutes, parents must be present, and no-one has to wear ski boots. Instead, Told has invented a super-light mini-ski with strap bindings which will fit around a child’s soft snow boots. “You can’t actually ski on them, but that’s not the point,” he says. “It’s just to give them an idea of what sliding on snow feels like.” Before he introduced these sessions he was finding 50% of three year-olds were dropping out after the first session. Now it’s down to something like 10%.

Even so, if your child is under four, or unhappy being left alone, he advises that at least one parent is around during the lessons.

4. Pick your spot with care – and don’t scrimp on the facilities

Told’s school sits at the top of the lift system, in a shallow bowl, backed by trees. Most skiers don’t even realise it’s there – so teachers and instructors have a quiet and sheltered environment in which to teach children to ski. Covered magic carpets make getting up and down the slopes easy, and there’s a a kind of magic roundabout for snow tubes, as well as a dragon train as back up. “If they’ve had enough of learning to ski, you can’t push them,” he says. “It’s much better to let them have fun doing something else.”

Not surprisingly, Told’s reputation has rubbed off on the village of Scheffau, at the bottom of the lifts, and it’s become something of a hot-spot for families. There, the four-star hotels, the Kaiser and the Alpin have strong family followings. Both have pools, and are featured by British tour operator Crystal.

You can find lots more information about travel to the Wilder Kaiser at wilderkaiser.info and about the Tirol at www.visittirol.co.uk.

No Responses to “How to Teach Children to Ski”