Where to Eat in San Cassiano 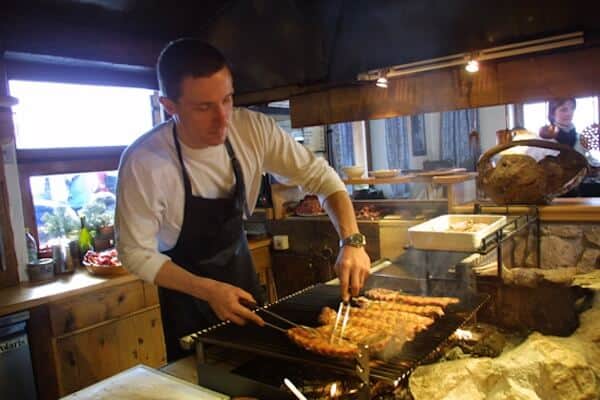 Fancy spending a couple of sunlit afternoons relaxing on a restaurant terrace? With sensational scenery to accompany your meal? Then put San Cassiano near the top of your hit list. There are only a handful of resorts (Zermatt, Courmayeur, St Moritz) that can match it. In Club Moritzino, at Piz la Ila, seafood is the speciality – which is a little surprising, perhaps, at 2077m: but they love to cook it, and present it with real flair. You’ll feel like film star by the time it comes to click back into your skis – which is appropriate because it’s a favourite with Italian celebs.

One of skiing’s greatest long-lunch resorts

There are several other great lunch spots in the area, including the terrace at the Hotel Ciasa Salares in the village of Armentarola, and Malga Saraghes (+39 335 7897164), above San Cassiano, which has outstanding homemade pasta.

One other must-eat destination is Rifugio Scotoni (+39 0471 847330), which is set in the Hidden Valley away from the main area of pistes. It’s a bit of a schlep to get there, but makes for a fun half-day excursion after you’ve got a few days of proper skiing under your belt. Plus the food, and scenery are superb.

Take a bus or cab up to the Passo Falzarego, above Cortina d’Ampezzo, then jump on the cable car to Lagazuoi, and ski the long, rolling and undemanding piste towards the village of Armentarola. Two thirds of the way down, you’ll pass the Rifugio, where you can stuff yourself on the most divine barbecued meat. At the bottom of the piste you can then pay a few euros to hang onto a rope and be pulled back by horses into Armentarola.

Top notch for dinner, too

Recently St Hubertus, home of super-chef Norbert Niederkofler, got its second Michelin star. “That’ll be good for business, then,” said one of our editors to the hotel’s owner, Hugo Pizzinini, recently. “What?” he spluttered. “You think we make money out of a restaurant like this? We do it for love! If we didn’t, we’d have given up long ago”. Whatever it is that drives Pizzinini and Niederkofler onwards, the results are impressive. The wine list is worth exploring, too – though we wouldn’t suggest going it alone. Let the sommelier guide you to some of the sensational pinot noirs and sauvignon blancs produced in the area (both grape varieties prosper here in the high daytime and low night-time temperatures).

St Hubertus is not the only Michelin-starred establishment in the area, either – La Siriola, at the Hotel Ciasa Salares in the village of Armentarola, has one star. So too does Stüa de Michil, in the village of Corvara, on the other side of the local slopes (it’s a 20-minute cab ride from San Cassiano to get there). The hotel’s wine cellar is famous in the area – and fabulously well-stocked. But you may find the tours provided rather eccentric. It’s better just to order a good bottle and leave it at that.

Among the other restaurants worth booking here is the wine bar and grill at the Rosa Alpina – specialising in grilled meats and pasta.

Something new for the winter

Gourmet chefs with a raft of Michelin stars between them will be busy creating slope food to accompany a glass of wine on the slopes this winter. Led by three well-known chefs from neighbouring Corvara, the idea is that they will be joined by hand-picked Michelin-star chefs from around Europe to create a unique type of slope food.

Much like the finger-food or drink that is sold from stalls, carts, vans and trailers in cities around the world – then cooked before your eyes – street food in the Dolomites will be served at selected mountain huts in the Alta Badia region. The chefs will creating their slope food dishes using with at least one local food product for each recipe.

No Responses to “Where to Eat in San Cassiano”