The Secrets of the Alta Badia Piste Map

Wondering where you can ski against such a dramatic backdrop? Read on…Photo: © Freddy Planinschek

So there you are, piste map in hand on your first day in the Alta Badia. The sun’s out, the pistes are freshly-groomed and you’re raring to go. But where do you ski?

We asked ski instructor René Crazzolara to talk us through the area’s secrets. Aside from a spell in South Australia, he’s lived in the region all his life: first in La Villa, then in San Cassiano. If anyone can guide you to the Alta Badia’s sweet spots, it’s him.

1. For many British visitors, the Gran Risa is a big surprise 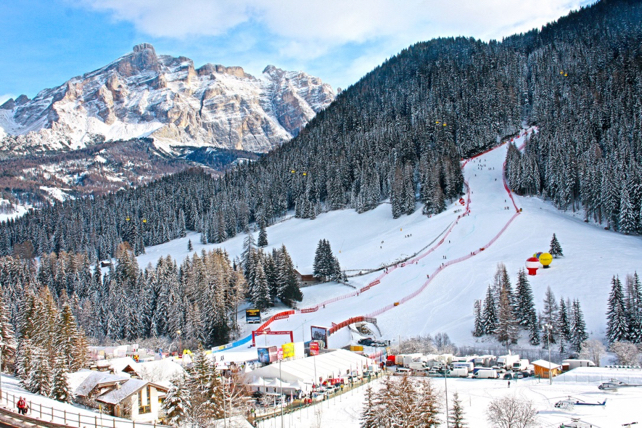 The dream of every keen piste skier is to test themselves on a World Cup run: and in Italy the Gran Risa course is at (or near) the top of everyone’s list. It made its World Cup debut in 1985, and thanks to the Alberto Tomba’s four victories there between 1988 and 1994 – as well as Max Blardone’s three wins between 2005 and 2011 – it will always be a favourite. When I was young we used to skip school just to see Tomba racing. It was a huge event.

But of course not every skier who holidays here follows the World Cup. So it’s quite a surprise for many to find such a steep run on the edge of the Alta Badia’s plateau. It plunges from the top of the Piz La Ila lift station, down to the outskirts of La Villa. Modern Giant Slalom racers get down it in around 72 seconds.

Even those who are looking forward to skiing it can find it a challenge. Obviously, it’s not rock hard like it is over the race weekend. That’s when the organisers inject the snow with 700,000 litres of water, so that it becomes much denser, faster and more consistent. But like any steep, north-facing piste it can get icy as the shadows lengthen at the end of the day – or bumpy if it’s mild.

So if you want to really enjoy it, don’t wait till the afternoon. Ski it first thing in the morning, when it’s freshly-groomed and empty. The great thing about the Gran Risa is that it’s not a simple straight-down-the-mountain descent. There’s a lovely s-shaped chicane in the middle: and when you can use the whole width of the piste to ski it, it’s so much fun.

Check out the video of Norwegian Henrik Kristoffersen’s wonderful winning run from the top of the course in December 2021. It was his second victory on the Gran Risa.

2. Look out for detours off the Sella Ronda 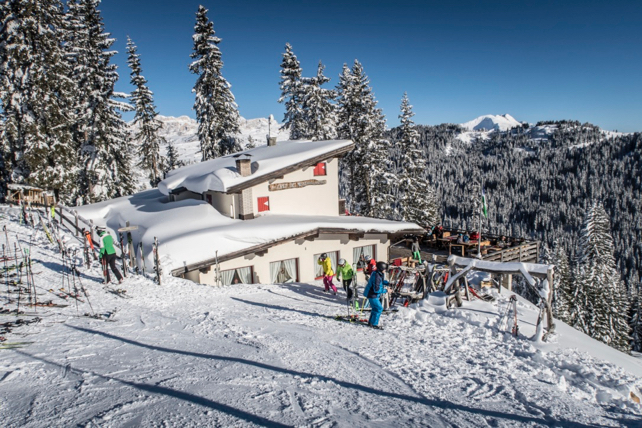 When I’m guiding clients around the Alta Badia, I’m always struck by how much they enjoy detouring off the Sella Ronda to ski the Crëp de Munt blue. It’s number 2 on the piste map, and it’s easy to miss unless you drop down to the Utiä Crëp de Munt restaurant in the Boé sector – between Corvara and the Passo Campolongo.

Of course, most people ski straight past it. They’re heading clockwise on the Sella Ronda circuit, towards Corvara. But their loss is our gain, because it keeps the Crëp de Munt blue blissfully quiet. It’s a lovely, winding run through the trees: and because hardly anyone else is there you get a sense of being alone in nature. It’s a little hint of how the mountains really are in winter, away from the lifts and pistes.

3. Skiing from La Marmotta is another hidden pleasure 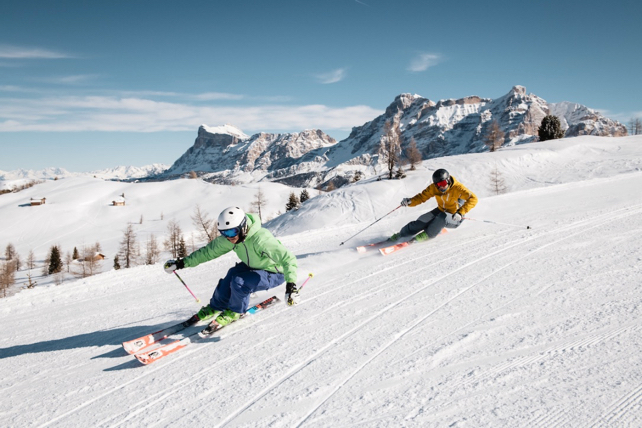 Just recently I’ve been skiing with a group of Australians, and they loved the descent that knits together pistes 21 and 21A, from the top of Pralongià, past Rifugio La Marmotta and onto the Alta Badia golf club. It finishes just across the road from the end of blue 2 (see above), so you can then ride the Poma drag lift up to the Utiä Crëp de Munt and ski that as well. Together, they create a lovely little pocket of tranquillity. You can see it on this drone shot on Google Maps, which was taken almost directly above the golf club.

The views as you ski are just amazing – looking across the valley towards the Sella massif and the cliffs of the Sas de Ciampac above Colfosco. But just as important is the quality of the snow. This is one of those runs that doesn’t seem to go anywhere important on the piste map, and is not part of the Sella Ronda. So hardly anyone skis it. It’s sheltered from the sun too, as it drops into a wooded valley, and the soft, cold corduroy seems to last all day. You get the “fresh tracks” feeling there even at lunch time. No wonder my Australian friends said it was beautiful.

4. Some of the best skiing is right on the edge of the piste map 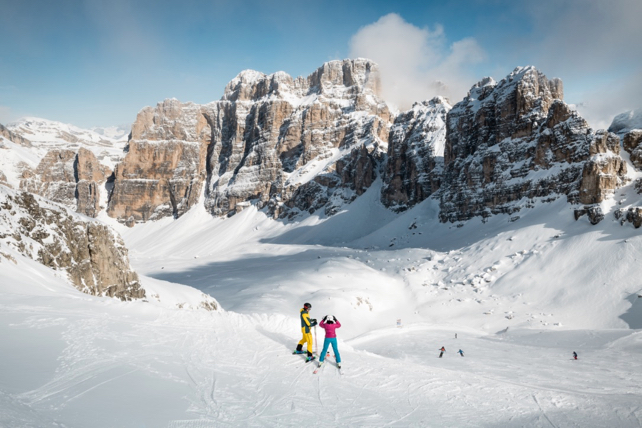 It’s a general rule right across the wintersports world. Don’t ignore the edges of the piste map when you ski! If you do that in the Alta Badia you’ll miss one of our finest runs: the Lagazuoi Circuit. First, you must ski to San Cassiano or Armentarola, and then travel by bus or taxi (not included in the lift pass) up to the Passo Falzarego. Here, you catch the Lagazuoi cable car to an altitude of nearly 2,800m – and a staggering panorama over the southern Dolomites. It’s a bittersweet view, because it’s one that soldiers of the First World War gazed at during the long and terrible Guerra Bianca/Gebirgskrieg: the White War between the Italians and the Austro-Hungarian Empire.

Then, it’s time to ski off the back of Lagazuoi, down the long Hidden Valley towards Armentarola. It’s a 7.5km run, rated red, and it drops through more than 1,000 vertical metres. It unfurls over broken, stony ground, so it’s not always open, but if there has been heavy snow, advanced and expert skiers should grab their avalanche safety equipment, hire a guide and head up there too. The slopes here are north-facing, and there are lots of chutes at the top. I love the feeling of being right up there amidst the rocks.

Aside from the scenery and the skiing there are two other highlights. The first is the Rifugio Scotoni: a mountain hut specialising in meat, cooked over a charcoal grill. I know the owners, so I always let Manuela and Christian recommend something when I’m there. But if in doubt I’d go for a Fiorentina steak, served with polenta. The Scotoni doesn’t do “ordinary” yellow polenta. Here’s its made with a mixture of different corn flours that give it a rougher texture, and a fuller flavour, and when it’s mixed with cheese – oh my. Soooooo good.

Then, at the very end of the run, you run out of slope before your reach Armentarola. How do you get back to the lifts? Not by bus: you pick up a rope and hitch a ride on the back of a horse-drawn sleigh…

5. Santa Croce is a canny place to ski if the weather turns 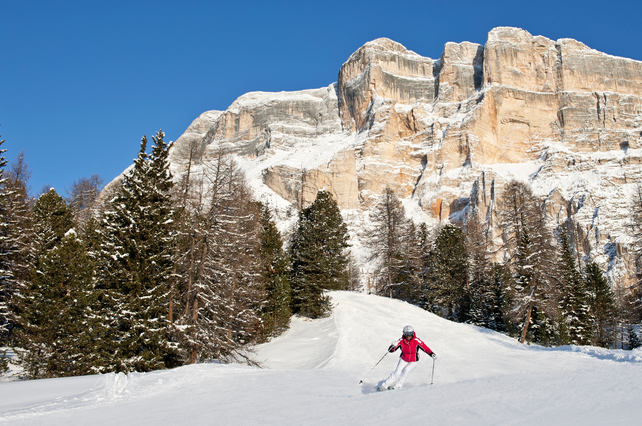 Notice any similarities with the photo at the start of this feature? This is Santa Croce/La Crusc. Photo: © Alex Filz

If the clouds come down or the wind picks up, we ski instructors often take our clients to the little pilgrimage church at Santa Croce. Like the Lagazuoi circuit it’s a proper excursion, away from the main ski area, and it’s considerably more sheltered than the higher runs.

But the blue-rated piste from the chapel down to Badia is also lovely in its own right. The terrain is very undulating, full of little knolls and bumps, and skiing it can be really playful – as you switch between short turns and long turns, speed up and slow down. It’s as if you’re surfing the landscape rather than skiing it.

There’s a real charm to the settlements too. This is where you’ll notice les viles – a characteristic settlement of the region, like a hamlet. Rather than live on separate farmsteads, farmers used to gather together into these viles of four or five houses, round a little chapel or fountain, and provide mutual support – as well as specialising in particular products. Some of the really ancient houses are still standing. The animals were kept on the stone-built ground floor in winter and the family lived upstairs, soaking up the warmth the livestock generated.

6. And if you want a long, top-to-bottom leg-burner… 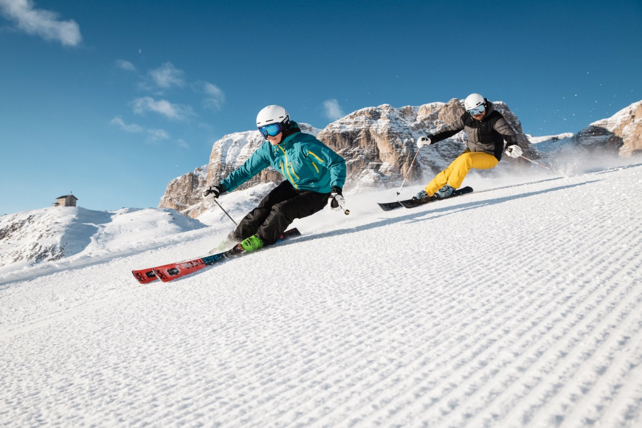 …Vallon is the place. It’s up a 2550m, and there’s an awesome view from the top of the chairlift. Here, piste 1 (black) flows into piste 22 (red) and you can keep going all the way down to the Passo Campolongo, 700 vertical metres below. It is, in a word, priceless.

For ten years, René Crazzolara lived and skied in South Australia. The rest of the time? It's been 100% Atla Badia. If you're looking for a way into this fascinating region, he's your man. Not only is he a qualified instructor who speaks effortless English, he knows a thing or two about local culture and language. "Iö baii Ladin," as he might say. Join him on one of the region's Nos Ladins tours.

No Responses to “The Secrets of the Alta Badia Piste Map”