Is Val d’Isere the New E-Bike Centre of the French Alps? 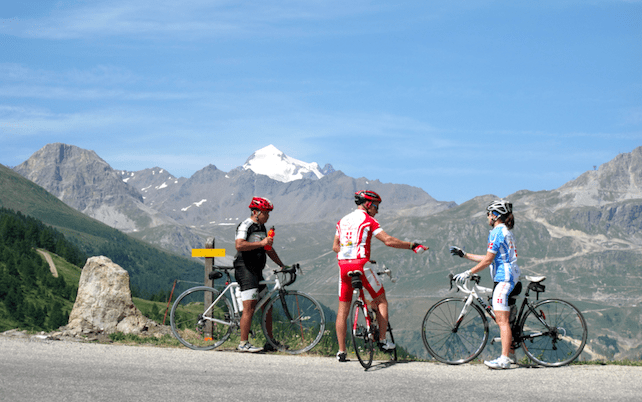 For one week each summer the atmosphere in France’s most popular ski resort crackles and fizzes as e-bikes and the strangest assortment of other electrically powered vehicles takes over the village of Val d’Isere.

In the warm summer sunshine a sleek BMW is followed, incongruously – given the 30C heat, by a piste-basher in total silence. A pro skateboarder slaloms uphill but is soon overtaken by a roar-less motorcycle. There’s even a gyroscopic moon buggy and an urban shopping scooter. But it’s e-bikes from a dozen European manufacturers that steal the Salon du Vehicle Electrique.

While the sport is still in its infancy in some countries, the craze for electric bikes is rapidly taking over in the Alps – nowhere more so than in France – as Chris Froome and Team Sky learned during the Tour de France when their frames were checked for hidden motors after each stage. So cleverly designed are the most expensive models that they look entirely like ordinary bikes. But when the going gets tough, a discreet touch of a button gives a 15mph boost to pedal power.

You still have to pedal, but the battery takes the sting out of the toughest climb: in the this case, the 2770m col de l’Iseran, the highest paved road in Europe. The 48km (30 miles) ascent starts in Bourg-Saint-Maurice. The toughest bit for the thousands of cylists who pedal up it each summer is the final 17km (10 miles) from Val to the top – you climb 895m on an average gradient of 6%.

It’s one of the toughest trials for pro cyclists and has featured five times as an hors categorie climb in the Tour de France, the last in 2007. Even in July, snow and ice can be added hazards along with the high altitude which makes it much harder work. Too much snow caused the stage to be cancelled in 1996 because of snow.

“Climb to the top with me?” asked a skiing friend who lives in the resort. While I’m fairly ski fit, I’m the wrong side of 50, and infinitely prefer going downhill on skis than going uphill on a bike. However, doing the ride on an e-bike seemed an acceptable challenge.

Swiss manufacturer Scott make good skis and cycles – and they’re at the forefront of e-bike technology. You can rent an e-mountain bike with lockable front and rear wheel suspension from Mattis Sport for a reasonable daily price. 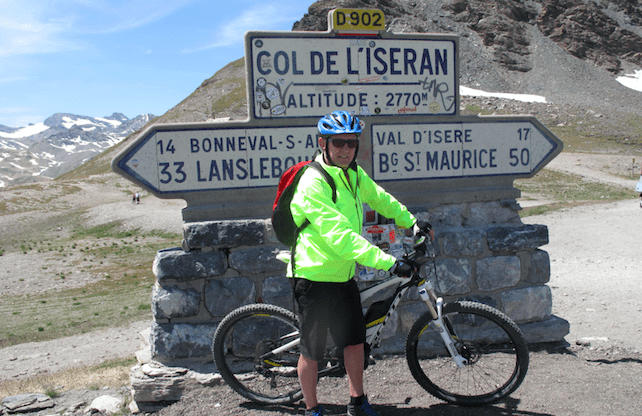 My ‘wheels’ were a bit heavier, but otherwise performed just like a normal mountain bike until you pressed the On button. How long does the battery last? This was my obvious question to Jean-Marc who operates the bike rental.

“That depends on how much you use it. But you should have sufficient battery for the full climb, as long as you are careful – and you won’t need any extra power on the way down.”

Being ‘careful’ proved to mean managing the different levels of power in relation to the gears and how I was feeling physically. I started off in Economy which gave just nominal assistance. But long before I’d completed the first couple of relatively gentle kilometres up to the base of the Le Fornet cable-car, I’d switched up to Tour which gave me a bit more help.

For most of the ride I upped to the Sport mode, which allowed me to pedal along in a mid-range gear without too much of an effort. The cycle’s computer gave a read-out in each mode on how many kilometres you had left in the battery. Only for the steep final kilometre did I allow myself to switch into top level Turbo – and arrived with 3km of power in hand.

Passing road cyclists who’d made the climb all the way up from Bourg was, frankly, a teeny bit embarrassing –particularly when I stopped to catch my breath and admire the view before passing them for a second time. But they took it all in good spirits (albeit tinged with a dash of envy) and we posed for pictures at the top of the pass. 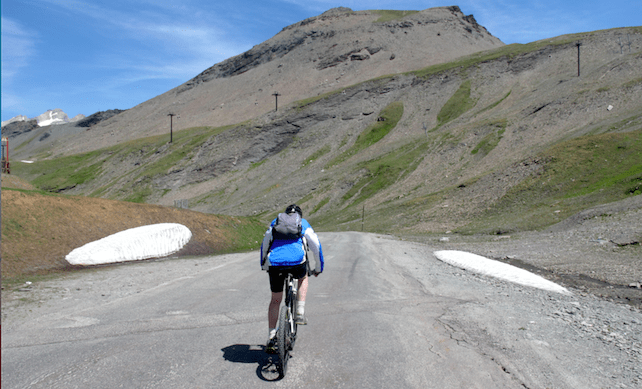 From here you have a choice: either carry on and descend the 14km to beautiful Bonneval for lunch in a café. The rental shop has an arrangement there for recharging your battery before the journey back up.

For me, this time, one col in a day was all that time (and energy) allowed. But I’ll have a crack at it next time. The climb had taken, with stops, around 80 minutes. The descent took just 20.

Thank you Mr Scott for disc brakes and suspension that gave a soft ride over the potholes. In the thin air it was all too easy to go too fast for comfort. We kept our speed mainly down below 50kph, but my cycle computer showed that the previous rider had hit 73kph!

Val d’Isere is by no means the only place in the French Alps where you can go electric. Villard-de-Lans near Grenoble is another centre. Austria has more e-bikers than anywhere else and we’ll be reporting shortly on what Salzburgerland and the Tirol have to offer.

Tell us what you think

Is e-biking the new black of mountain and road biking, or are the estimated 2.5 million riders in Europe cheating?

No Responses to “Is Val d’Isere the New E-Bike Centre of the French Alps?”