A Glimpse of Biking Paradise: Zell am See – Kaprun 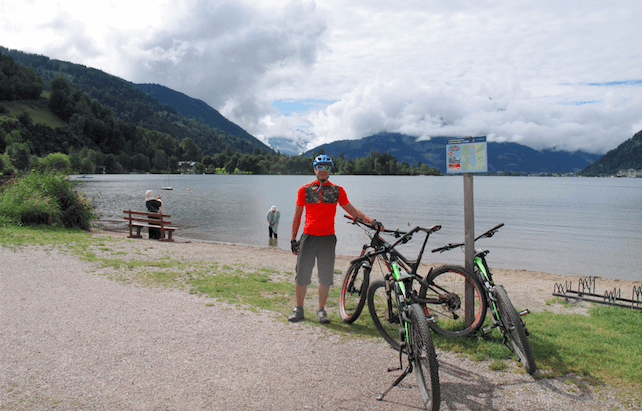 Forget the Arab Spring, this is the Arab Summer. So where are we today, huh? Cycling on Mount Lebanon or touring in the Jordanian Highlands?

Neither, actually – we’re e-biking in Zell-am-See in the heart of Salzburgerland. If you’ve always thought that this exquisitely beautiful lakeside town at the foot of the 1965m metre Schmittenhohe was one of Austria’s most popular ski resorts, you would, of course, be correct. Together with nearby Kaprun and its Kitzsteinhorn glacier, this is one of the most popular ski areas in Salzburgerland. Foreign winter visitors come primarily from Germany, the UK, and the Netherlands.

But during the months of July and August, while other towns and villages in the region are alive to The Sound of Music – no more so than in this 50th anniversary year – Julie Andrews has done a complete runner here.

Instead Zell becomes the focal point – a Mecca if you must – for as many as 80,000 tourists from the Middle East. This alternative tourism all started 10 years ago when the number of Lakes and Mountains visitors appeared to be in serious decline. Zell came up with the jolly wheeze of advertising in the Gulf states. They later withdrew the campaign, but already they had triggered a seemingly unstoppable chain reaction.

It seems that Zell, with its tranquil lake dominated by a snowcapped peak is, for many people used to the desert scenery of the Gulf, a glimpse of paradise. Add in the usual summer mountain mix of soft sunshine interspersed with bouts of Alpine rain and you’ve created the ideal holiday foil for the fierce heat of home.

This state of affairs adds an altogether exotic element to any e-biking expedition around here, along with an occasional addition to natural hazards. 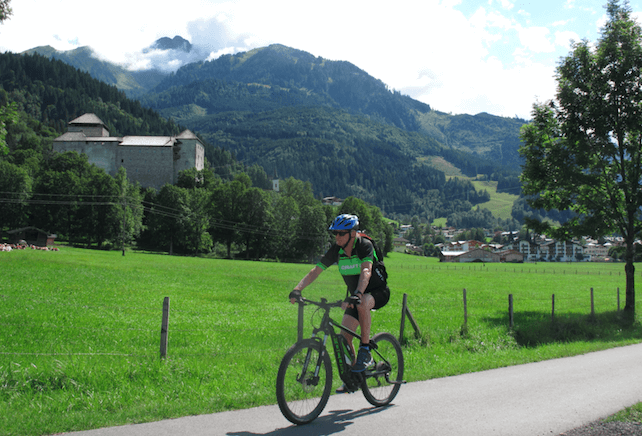 A Break with Brakes

Coming around a corner – too fast – on a steep track through the woods above Kaprun, I came across three women in full niquab with only their eyes visible, blocking the way ahead. Thank God for Shimano hydraulic disc brakes.

You can go up the Kitzsteinhorn gondola and play in the snow – Arab visitors find this fun – but sadly, August skiing is no longer an option here. The pistes are closed from late July until early October.

However, mountain e-biking is the next best thing. It’s been slow to catch on in some countries, but the sport is flourishing in the Alps – and not just for older riders. Remember when fat skis first came along purists claimed it was cheating? The e-bike revolution has already passed that stage, with the largest number of purchasers in Austria aged in their 20s and 30s.

The current generation of e-bikes has a range of at least 60km, depending of course on how much you use the engine. We averaged around 50km a day and you’re unlikely to be caught short of power, there’s a whole network of 60-minute charging points in restaurants and shops.

Rental is available in almost all sports shops, although you may need to look at more than one to find the most suitable bike – particularly for smaller frames. The choice is largely between the Bosch and slightly less expensive Yamaha power systems – both are good, although aficionados tend towards Bosch.

It’s also well worth investing in a guide for a day in order to discover the best off-piste routes. Heli Schneider who runs Adventure Centre Kaprun along with his Alpin Ski School is a bike and ski expert with a vast knowledge of the region that includes the best lunch stops.

Here’s our pick of the routes around Zell: 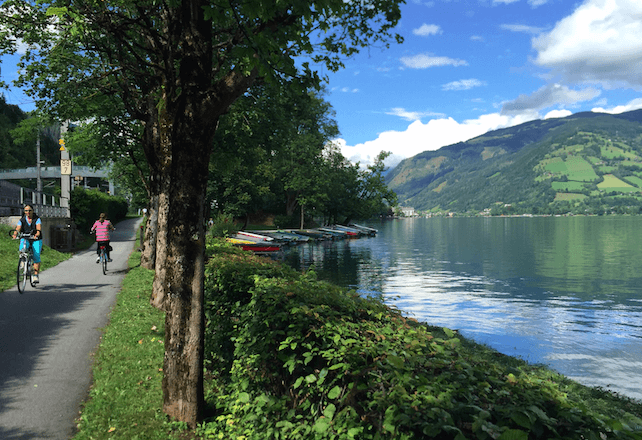 This is the ideal warm-up run. Get a feel for your rental bike and work out the best combinations of gear and power settings. Signage everywhere is pretty good, but after you’ve crossed the railway line onto the shore of the lake it’s best to go clockwise.

Mostly, the cycle route is a path that follows the shoreline, although for a while around the village of Thumersbach – directly opposite the town – you have to follow the main road either on or off the pavement. 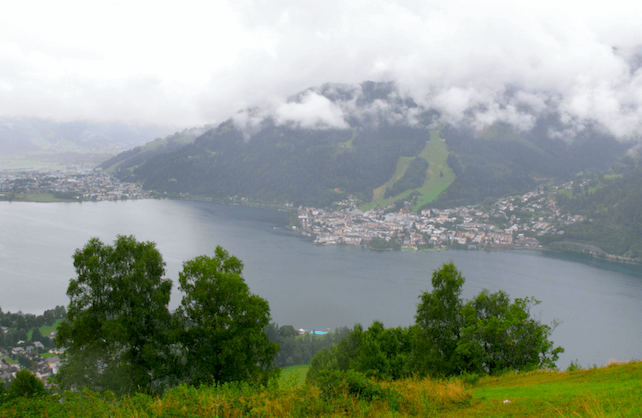 View of Zell from the road up to Mitterberg. Photo: © Welove2ski.

This a destination run – the goal being the wonderful Gasthof Mitterberg up a winding and occasionally steep road above Thumersbach with a sheer drop to the lake below. Our guide Heli, on his unassisted mountain bike, climbed the 430m in one. Even with the aid of a battery it was a bit of a work-out – not least in avoiding the temptation of overtaking him. The reward is a spectacular view and equally spectacular lunch on the terrace.

After the Wiener Schnitzel (and one beer at the most!) it’s downhill all the way back to Thumersbach, and then a long sojourn along rolling cow-scented tracks through the pastures ,to Maishofen, Gerling, Hof, and back to Zell. 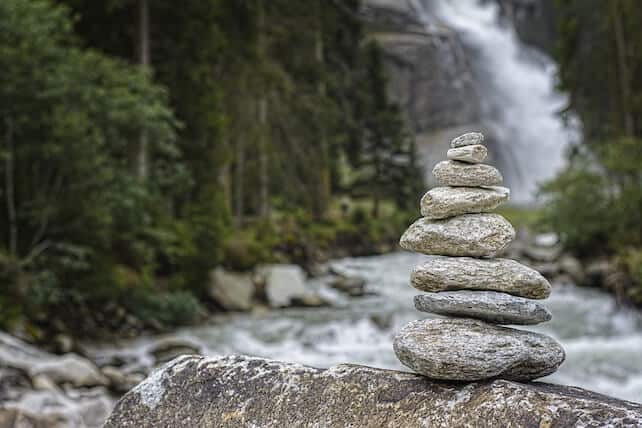 With a total height of 380m in three stages, these are the largest waterfalls in Europe and well worth the extended day out. Allow at least an hour at the falls for sightseeing.

The effortless journey on a well-marked cycle path takes you mainly through farmland past Kaprun, Mittersill and Neukirchen. The route follows the narrow-gauge Pinzgaubahn railway track all the way from Zell. Unless you fancy a 134km day out, you can take a softer option and return by rail.

Stay in a Family-Run Hotel

We travelled with Inghams via Gatwick and Innsbruck to Hotel Berner in Zell am See, a comfortable four-star with good spa that has been run by three generations of the Berner family. Importantly, the hotel is situated in a quiet position a five-minute walk from the centre and the lake. The two brothers who run it insist on maintaining a balance of nationalities among their summer guests. Visit Salzburgerland and Zell am See Kaprun official websites for more information on the area.

No Responses to “A Glimpse of Biking Paradise: Zell am See – Kaprun”