Summer Lunch With A View 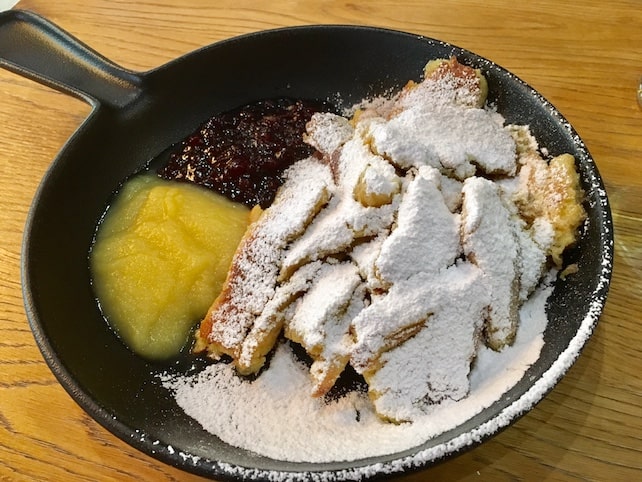 Kaiserschmarrn at the Platzalm. Photo: © Welove2ski.

The Zillertal is in the Austrian Tirol, a 40-minute drive from Innsbruck. Its four regions are Fugen-Kaltenbach at the beginning of the valley, Zell am Ziller-Gerlos in the middle, Mayrhofen-Hippach at the end, and Tux-Finkenberg in the Tuxertal, which is a separate but connected valley.

The area’s most famous resort is Mayrhofen, but in fact there’s a lot more to the area than that one major ski and summer resort. There are 532km of prepared walking paths, eight Via Ferratas for climbing, one third of the area is national park, and there are 130 mountain huts. Of these, 40 of the huts are open in the summer. Here are a few of our favourites: 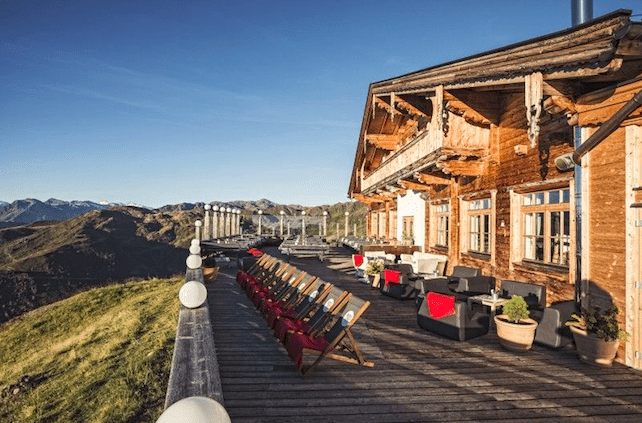 During our visit a wedding party had taken over the main dining room, but there was still plenty of space in the attractive adjoining rooms. The Kristallhutte is known for is art collection, including giant sculptures of insects outside. In fact, for the past 12 years the owners have offered local and international artists the opportunity to exhibit and sell their work here.

The view: Look down to Kaltenbach and the Ziller valley, with cows in the meadows. The only sounds you’ll hear are the cowbells clanking, streams and waterfalls.
What to eat: Apfelstrudel with a difference – it’s big enough for two and has stewed apples inside and a soufflé surrounding instead of the usual pastry.
Where to go from here: In the winter it’s at the top of a chair-lift at 2150m but in summer you have to walk more than an hour up here from the car park beside a small lake – and that’s after you have conquered the unprotected hairpin bends of the terrifying single-track Zillertal Hohenstrasse. You’ll have to walk down again to the lakeside car park. Alternatively, if you’ve got the legs for it, come up here by mountain bike. If you want more, then you can carry on for another 30 minutes up to the equally delightful Wedelhutte. 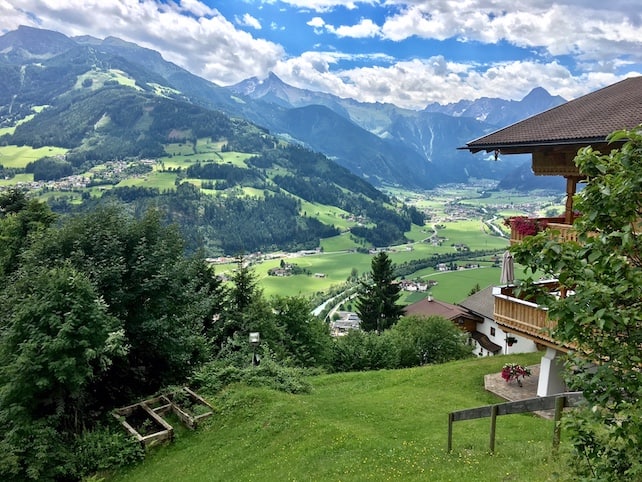 Reached up a winding road from Zellberg across the river from Zell am Ziller, is the gorgeous little Gasthof Schulhaus. The restaurant’s fresh and seasonal cooking uses products like organic butter, cheese and milk from local farms. Trout and char come from the alpine stream in the adjacent village, and natural honey and game are from a neighbouring hunter called Peter. In the summer the Gasthof’s garden grows herbs, blossoms and salads. You can stay here in the double room or one of three apartments.

The view: Look down on the Ziller Valley from the lovely terrace.
What to eat: The Kaiserschmarrn, with its plump raisins soaked in rum.
Where to go from here: Lots of walks further up the mountain or down through the forest to Zellberg. 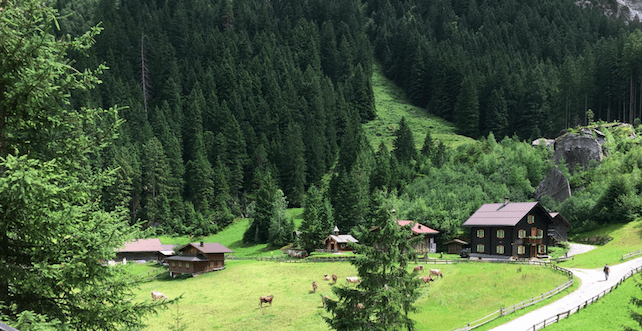 Ginzling is one of those unspoilt Austrian villages with ancient chalets that is rich in the history of Alpine climbing and mountaineering – no skiing here, and when you cast your eye up at the soaring peaks and sheer rock faces above it, you can see why. In winter it’s a forbidding place, but in summer it’s a delight for bikers and hikers. A 15-minute drive from the village – up at 1257m and even wilder terrain – you’ll come across a hotel that looks like something out of a bygone era. Alpengasthaus Breitlahner is owned by the family of three-times World Cup winner, Richard Kroll who was tragically killed in a car accident when only 28. The hotel is a setting-off point for lots of hikes of varying difficulty.

The view: A bucolic picture of alpine huts, forest and cows in the meadow beneath you.
What to eat: At lunchtime try the large and fluffy Kaiserschmarrn. The hotel aims to ‘personalise’ breakfast – ranging from a sweet one (lots of jam and honey) to a classic one (including bacon and eggs).
Where to go from here: Walk another 90 minutes to the Grahwand Hutte, or drive on up to the Schlegeis Reservoir – an enormous and spectacular dam and mountain lake with yet more walks including one to Pfister Joch over the Italian border. 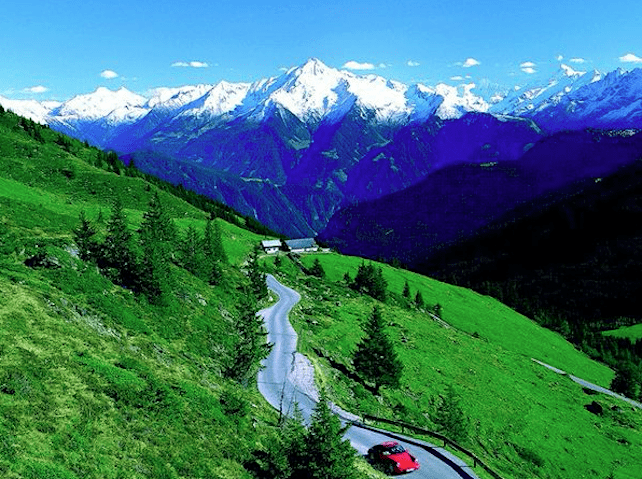 Platzalm is at 1790m – reached along the Zillertaler Hohenstrasse, which is a road of steeply winding hairpin bends above the village of Ried, Kaltenbach and Aschau. You can stay the night at Platzlalm, which can also be reached by bike or on foot. In winter, the restaurant picks you up by snowmobile from the gondola top station.

The view: Down to Kaltenbach in the valley below.
What to eat: Kaiserschmarrn (again!), the restaurant’s own version of pizza – topped with cream instead of cheese.
Where to go from here: Carry on up 200m to a small lake, which is the starting point for walks to the Kristallhutte and Wedelhutte. 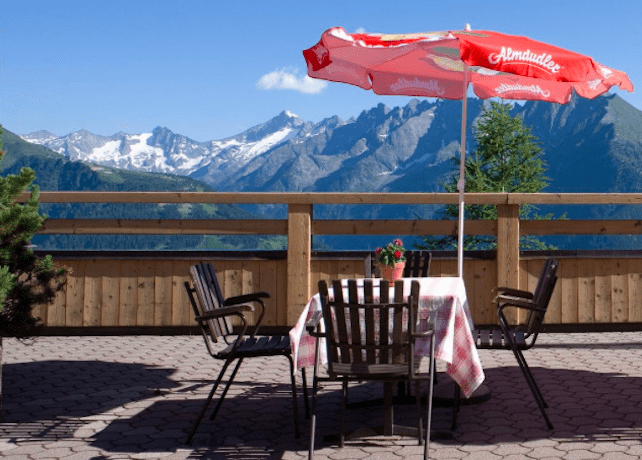 Gschosswandhaus is reached by taking the Penkenbahn cable-car from Mayrhofen then a short walk below the half-way station, or a 9km drive from Finkenberg. There’s a playground outside complete with trampoline, go-karts and a football goal.

The view: From the sun terrace down to Mayrhofen in the valley below.
What to eat: Home-made spinach dumplings, the fitness salad, or a cheese omelette.
Where to go from here: Lots of hiking trails from here. Carry on up to the top station where you’ll find a a ‘fun sport station’ with an all-wooden playground and a small lake with zorbing. 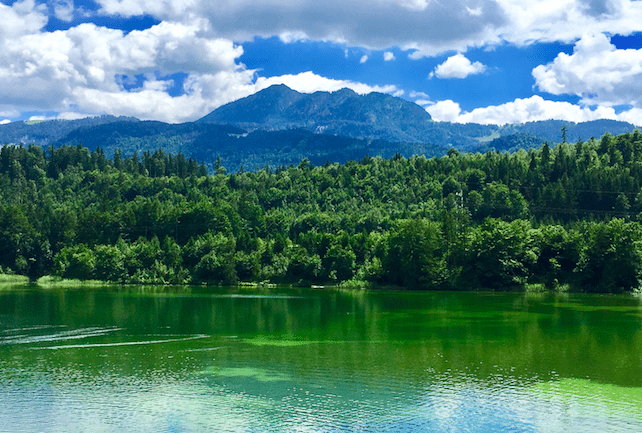 View to the Reintalersee. Photo: © Welove2ski.

This one is not actually in the Zillertal, but it is the nearest scenic swimming lake and just a five-minute drive out of the valley. The beautiful Reintalsee is close to the village of Kramsach and the neighbouring village of Alpbach. Set on a grassy bank, the Fischerstube has a sheltered terrace overlooking the lake.

The view: The lake shimmers from a turquoise blue to emerald green and is a great place for wild swimming. You can rent rowing boats, paddle-boards, kayaks and pedalos – just be careful not to hit a passing duck.
What to eat: The trout, miller style, accompanied by a serving of roast vegetables.
Where to go from here: Walk on the woodland path around the lake, or bring your swimming things and go for a dip. The water is a fairly shallow, so quite a bit warmer than the average Alpine lake. 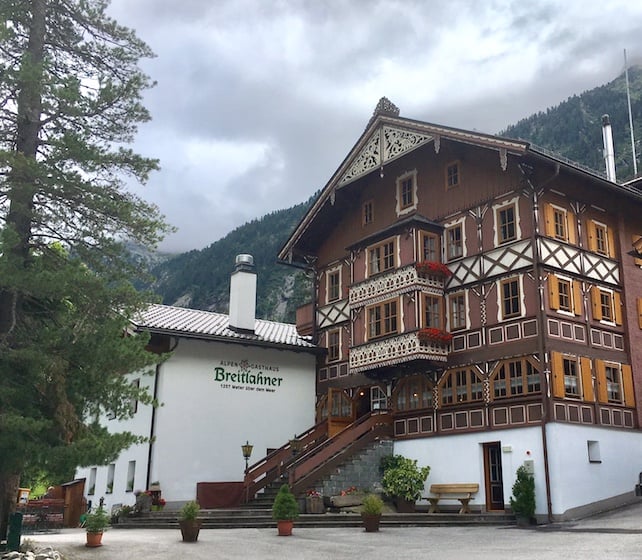 See also our feature on The best mountain breakfasts in the SkiWelt.

2 Responses to “Summer Lunch With A View”