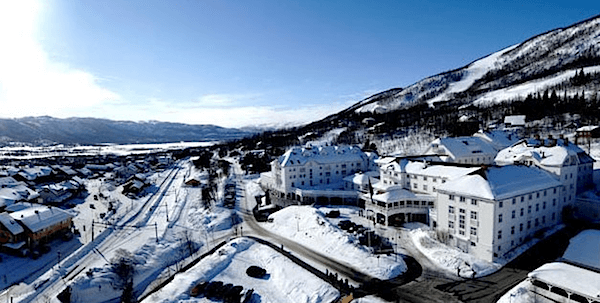 Most people have a misconception about Norwegian weather, which is far warmer than you might expect at such a northerly latitude. This is due primarily to the Gulf Stream, which brings warm seawater to the Norwegian coast. However, if it were not for the Gulf Stream – and the Midnight Sun – only polar bears would thrive in this otherwise uninhabitable land. Half of Norway’s total area lies above the treeline and a quarter of the country is covered by forest.

A general sense of remoteness rarely found in the Alps

Geilo, and indeed the majority of ski resorts, is located in the south of the country, so the climate is milder here, with an average mid-winter temperature of around -6c and daylight hours from 9am to 4pm. By March, the number of daylight hours increases to 10, so you can carry on skiing until late in the evening. Thanks to a reliable snowfall, the ski season is a long one, with snow virtually guaranteed until May.

The stable snow conditions are a reason why so many non-ski activities are on offer here, ranging from ice-fishing to husky sleigh rides – all of them require a steady chill or consistent snowfall from early on in the season.

The first known British visitor to the area around the Hallingskarvet mountains was in 1867, when Lord Garvagh of Portman Square, author of a book called The Pilgrim of Scandinavia, arrived in what is now Geilo. When the Bergen railway line launched in 1909, the village began to grow around the small railway station that marked the halfway point in the wilderness between Oslo and Bergen. More hotels were built the same year, including the Dr Holms Høyfjellshotell, which to this day remains the focal point of the resort.

However, the idea of Geilo as a modern ski centre didn’t really catch on until one of Norway’s first slalom races were held here in 1935. The first chair-lift opened in 1954, the resort’s first ski school in the 1950s, and Geilo hasn’t looked back since.

Today it’s one of the best family resorts in Scandinavia. It is also well-known to avid cross-country skiers as one of the main centres of the famous Hardangervidda Plateau, with a total of 220km of loipe in the immediate area of the resort. As a complete contrast, Geilo is also one of the most important places in the world for kiteskiing. The landscape and wind conditions on the Hardangervidda Plateau make this an ideal location for the sport.

No Responses to “Geilo, Norway”