Where to Party in Are, Sweden 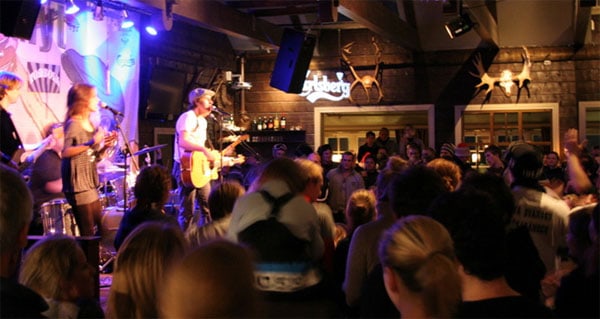 In Are, Sweden apres-ski is called after-ski, and – at the weekends at least – it won’t disappoint even the most hardened Alpine party animal. Friday and Saturday nights are the big ones in town, because that’s when the free-spending Norwegians pile in from nearby Trondheim. Are is bigger and cheaper than their own ski resorts, and the bars and clubs are buzzing because of them.

On the slopes, the bar at the Fjallgarden hotel is one of the main rallying points as the lifts start to shut – and often hosts live music. On Sundays, however, Timmerstugan, close to the bottom cable-car station, is the place to be. Things can be pretty animated in there by 5pm.

There’s usually a bit of a gap in Are nightlife once the apres-ski bars close – while everyone has supper, or takes their skis over the VM8 chair-lift for a spot of night skiing. The price of a drink here is comparable with A-list French ski resorts – but all the same that doesn’t stop most twentysomething Scandinavians getting revved up “at home” in their self-catering apartments on alcohol they’ve bought at the local Systembolaget in town (Systembolaget is the government network of shops which has the monopoly on off-licence sale in Sweden).

After that, it’s into town, to bars such as Wersens, the Olbaren and Broken, around the town square. Then to Dippan nightclub, or to Bygget on the outskirts for dancing (it’s a leisurely 15-minute walk from the town square, heading west towards the VM8 chair-lift. For a more low-key drink, head to the super cool Latin American restaurant, Supper, for one of its amazing cocktails.

In Are, apres-ski covers a lot of other activities besides dancing on the table. Check out our features about dog-sledding and snowmobiling.

No Responses to “Where to Party in Are, Sweden”