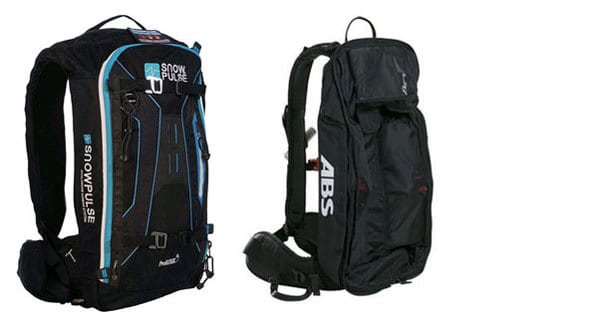 Left: the Snowpulse Prorider 15. Right: the ABS Airbags Vario base unit. Both at snowandrock.com.

Avalanche airbag rucksacks are a simple but effective idea. If you get caught in an avalanche, you pull a ripcord, and out bursts an airbag (or two) from your pack – helping you to stay buoyant on the surface of the snow as you’re swept down the mountain.

If you don’t have an airbag, and you’re caught in an avalanche, you’re much more likely to tumble down into the snow, and stay there. And that’s usually where the problems start.

For a start, you won’t be able to move. Avalanche snow sets heavy and hard when it stops, and can weigh an astonishing 500kg per cubic metre. Obviously, you won’t be visible to rescuers either – and even if you and your party are all wearing avalanche transceivers, you’ll be utterly dependent on whether or not the rest of the group is unhurt and thinking clearly.

Worst of all, you’ll have a limited air supply. Often the snow around you contains oxygen, but you’ll use it up quickly. The statistics are hair-raising. In the first 15 minutes your chances of survival are 95% – but they fall away sharply after that, down to less than 30% in 45 minutes (see pistehors.com). Asphyxiation is the usual cause of death (see CMAJ).

Given these factors, anything that helps to keep you on or close to the surface is worth having. In fact, research by the Swiss Avalanche Institute in Davos suggests that avalanche airbag rucksacks, properly activated, can increase their users’ of survival eightfold. It’s no wonder that many mountain guides now wear them as a matter of course. All the guides at Piste to Powder in St Anton do, for example (Graham Austick, the school’s founder, has worn one for eight years). So too the guides who run the excellent Snow and Avalanche Awareness Camps (SAAC) in the Tirol.

The two main competing brands are ABS and Snowpulse. ABS uses two airbags, which inflate out of the side of the rucksack, and Snowpulse one, which inflates round the back of your neck and over your shoulders. Here’s how the two systems work, Snowpulse first, then ABS.

The only stumbling block is deciding which system to buy. Welove2ski asked Klaus Kranebitter, a UIAGM mountain guide with SAAC to outline the pros and cons of both systems. These are his thoughts.

“ABS
Advantage 1: if one airbag pops on a rock, you have a second one. But this is not very likely.
Advantage 2: while still riding the avalanche with open airbags, you can move your head left/right to stay orientated.

Snowpulse
Advantage 1: your head and neck stays protected during the ride in the avalanche.
Advantage 2: if you do get buried with your head in the snow, the chamber looses gas within a few minutes and creates a breathing cave around your face.”

The key thing, however, is not to prevaricate. The evidence seems overwhelming. BUY ONE.

For information on airline policies on carrying avalanche airbag systems, check out this thread on Snowheads, and this feature at Wildsnow.com.

Also see our feature on keeping safe on the mountain.

No Responses to “Avalanche Airbag Rucksacks: Why Off-Piste Skiers Need Them”