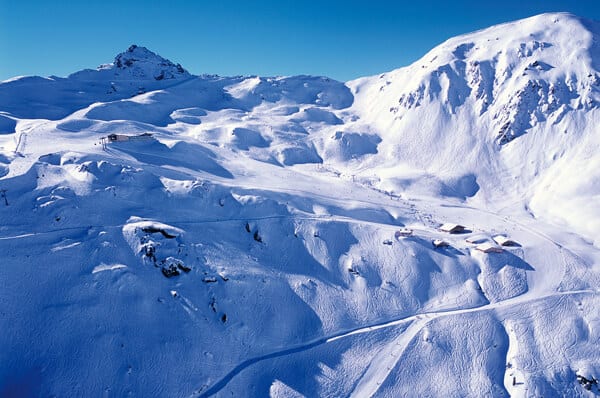 The Zillertal is a flat-bottomed, steeped-side valley that burrows into the mountains east of Innsbruck – and Hochzillertal-Hochfugen is one of several ski areas dotted along its length. The other main ones are Mayrhofen, Hintertux and the Zillertal Arena – and together they offer a mind-boggling 671km of piste. They can all be skied on a single lift pass, and day-tripping between them is easy. (There’s a good public transport system of trains and buses, but having your own car will make the commute much more convenient.)

It’s not just the extent of the skiing here that’s impressive. It’s the variety too – and nowhere more so than in Hochzillertal-Hochfugen. It’s actually a union of two separate ski areas, which are now joined by a single gondola, and in terms of the skiing on offer, they’re chalk and cheese. The former is made up of wide, easy-skiing pistes above the treeline. The latter is more heavily forested, and mixes high Alpine bowls with tree-studded slopes lower down, which are cut with the occasional rock band and cliff. It adds up to the best mix of off-piste terrain in the Zillertal.

Hochzillertal-Hochfugen is best for day-trippers and weekenders

No doubt about it, this is an interesting area. It’s a must-ski destination for off-pisters holidaying in the Zillertal, and is also home to one of the best mountain huts in the Alps, and one of the best restaurants, too.

But we wouldn’t recommend it as base for a week’s holiday for most people: for the simple reason that it lacks a decent resort village at the bottom of the lifts. The little cluster of hotels in the trees on the Hochfugen side of the ski area is the most attractive base. And for a group of well-heeled thirty or fortysomething off-piste skiers, it would be a near-perfect perch for a short break or weekend – thanks to its snow micro-climate, freeride-friendly culture and excellent off-piste tuition.

But anyone looking for proper ski-town buzz will be quickly bored here: and we certainly wouldn’t recommend the village of Kaltenbach, on the Hochzillertal side as an alternative. It’s dominated by a vast car-park used by day-tripping Austrians and Bavarians, and is no substitute for the bustling resort town of Mayrhofen, further up the valley.

No Responses to “Hochzillertal-Hochfugen, Austria”