Guide to the Mountain in Klosters 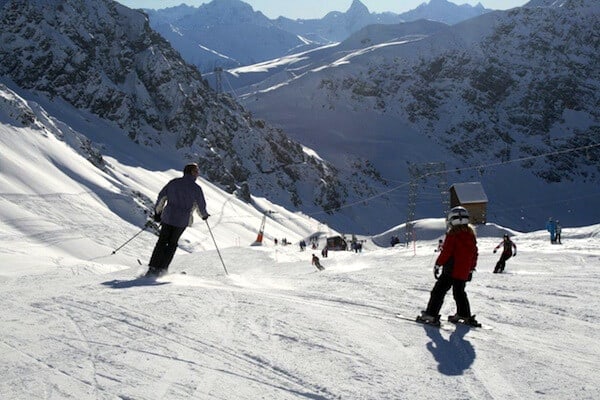 Taken as a whole, the Davos and Klosters area is vast (encompassing 310km of pistes), diverse, and – at times – annoyingly fractured. It’s not as bad as Chamonix in this respect, but all the same, getting between the five separate areas can be a pain in the a*se if you’re used to the convenience of a resort like Tignes or Les Arcs.

The better end of the Davos-Klosters area

That said, however, Klosters does have the best of it, sitting as it does beneath the most complete of the five mountains, the Parsenn. In the right conditions there’s some sensational skiing to be had here, at all levels.

Mountain access from Klosters Platz is by the two-stage Gotschna cable-car. On the way up you pass over the infamous Wang – the open, off-piste face of the Gotschnagrat, on which a party including Prince Charles was hit by an avalanche in 1988 (one member of the group died). Needless to say, the avalanche risk is very high here, but if you like your skiing steep and deep, and catch it on a good day in the company of a guide, you’ll have an experience you won’t easily forget. We certainly haven’t.

There’s plenty more steep off-piste skiing to be had here – but what most people know this mountain for is the extraordinarily long groomed runs from the 2844m Weissfluhgipfel back to the Klosters valley. The longest is 12km, and drops through 2000 vertical metres, and although it’s rated a red, almost anyone can manage it, provided the snow is in reasonable condition on the valley floor. There are few easy pistes in skiing to match the sense of travelling you get from it, or the prettiness of the scenery at the bottom.

Some excellent beginner slopes – and some great ski-tours, too

Meanwhile, over on the other side of the valley Klosters has its own private area, the Madrisa, which is home to some of the best beginner slopes in this part of Switzerland. There’s tougher stuff here too, including the steep black marked No.10 on the map.

From the top of Madrisa, experienced off-piste skiers and boarders (accompanied by a guide) can ski across the border to Gargellen in Austria’s Montafon Valley. It is also possible to follow in the footsteps of Sir Arthur Conan Doyle, beginning with a climb from Frauenkirch followed by a descent through the woods. You then reach the Swiss resort of Arosa, before catching a train back to Klosters again. Another alternative is to ski off the back of the Parsenn, via the Hauptertalli or the Strelapass, which bring you down to the railway station at Langweis on the Arosa line.

Finally, a word about elevation. At around 1200m, Klosters is low. It is however in the east of Switzerland, and here the climate is generally colder and more continental than it is further west. It also sits in something of a snow pocket, and often snags storms rolling in from both the north-east and north-west. In a storm, there’s usually noticeably more snow here than in either Davos, or over in the Engadine valley (reached by a long train tunnel under the mountains). The average snowfall figures reflect this – 490cm a winter, as opposed to 430cm in Davos.

Despite the presence of two snowboarding schools in the village, most boarders will probably be happier up the valley, in Davos. It has a stronger snowboarding culture, particularly on the Jakobshorn mountain, location of the main terrain park, the Sunrise, which gets a 4/5 rating from snow-parks.com. The pistes up here tend to have a more even pitch, too. Above Klosters, the long pistes from the Parsenn back into the valley – much loved by intermediate skiers – are too flat for boarders. There is, however, a small freestyle park at the Madrisa Glatteggenlift.

No Responses to “Guide to the Mountain in Klosters”