Guide to the Mountain in Le Grand Bornand 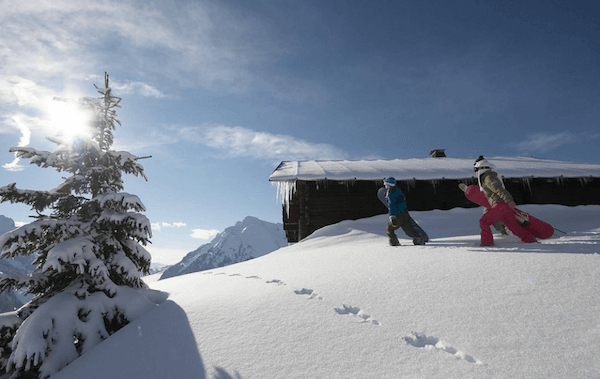 If you like flattering intermediate skiing against a beautiful backdrop and a genuine Savoyard mountain welcome, then Le Grand Bornand could be the place for you. The local groomed terrain totals 90km and there another 130km in the rest of the Massif d’Aravis reached from La Clusaz 10 minutes away by free half-hourly shuttle bus. If you arrive for the first time in the village in the dark, you’ll look in vain for a ski-lift. In fact there are two high-speed gondolas tucked away right behind the hotels and boutiques. So if it’s not ski-in ski-out, then it’s hardly inconvenient.

When snow conditions are good, experienced skiers have a red-graded return run, which will drop them right back beside the gondolas. But most of the network of chairs and a smattering of drag-lifts is spread over half-a-dozen peaks is centred on neighbouring Chinaillon.

A choice of mountain access points and home runs

Skiers here have a choice of chair-lifts heading up to around the 1800m mark from departure points along the valley. There’s a wide choice of return runs, most of them graded blue in order to open things up to less accomplished skiers. A potential downside is that this isn’t a true high-altitude resort, but the snow is fairly reliable because of its proximity to the Mont Blanc Massif.

The haul over from Le Grand Bornand is handled by a pair of modern high-speed gondolas that rise sharply from the village. A chair from the arrival point takes you on up to the summit of Mont Lachat at 2100m, the highest point in the ski area. Getting around the area can be a little confusing initially, but once you get your bearings it all hangs together.

But the skiing looks a bit tame, doesn’t it?

It all depends on your skiing level. You might imagine that with just three blacks it must all be a bit unchallenging. But the occasional piste-grading quirks might make you feel differently once you begin to ski some of the higher runs. Certain reds in particular are quite demanding, while even the occasional blue-graded piste will throw in something unexpected to keep you focused. So it’s not boring, and this may explain why so many enthusiastic regulars who learned to ski here retain a soft-spot for the place. You can start off gently, but there’s plenty to aspire to, and you’ll learn a lot along the way

Freeride at your own risk

For advanced skiers there’s Espace Freeride at La Combe de l’Envers. This is an itinerary area that is avalanche-controlled, but not patrolled by pisteurs. The entry point opposite the arrival of the chair-lift can be tricky. But if you turn skier’s right and go down 200m there is an easier way in.

The snowpark includes a 100m half-pipe, a 700m snowcross course, and rails catering for different abilities. The park sits on the slopes of Le Maroly at 1800m and has two dedicated drag-lifts. In addition to the downhill terrain, there are 60km of groomed cross-country pistes.

See also our feature on What You Should Know About Lake Annecy Skiing.

No Responses to “Guide to the Mountain in Le Grand Bornand”