What You Should Know About Lake Annecy Skiing 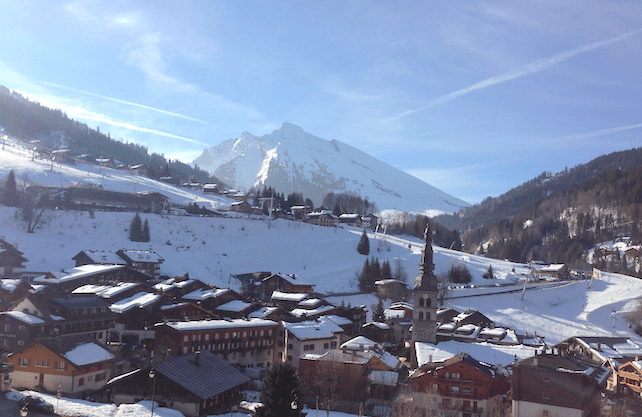 The Towns Have a Life Outside Skiing

The resorts of La Clusaz and Le Grand Bornand are located just 10 minutes apart from each other amid spectacular scenery in the Aravis mountain region, less than half an hour from the lakeside town of Annecy but still largely unknown outside France. Both villages are year-round farming communities that are not entirely dependent on seasonal tourism.

The traditional market town of La Clusaz is centred around an early 19th-century church, with wooden chalet-style buildings and a lack of concrete or high-rise eyesores. There are some lively bars and restaurants, and a couple of nightclubs. Le Grand Bornand is an attractive Alpine village. However, the majority of visitors choose to base themselves in higher and more modern Chinaillon, which has a lot more accommodation. Up above the resort you’ll notice some gorgeous ancient timber chalets dotted around the piste. 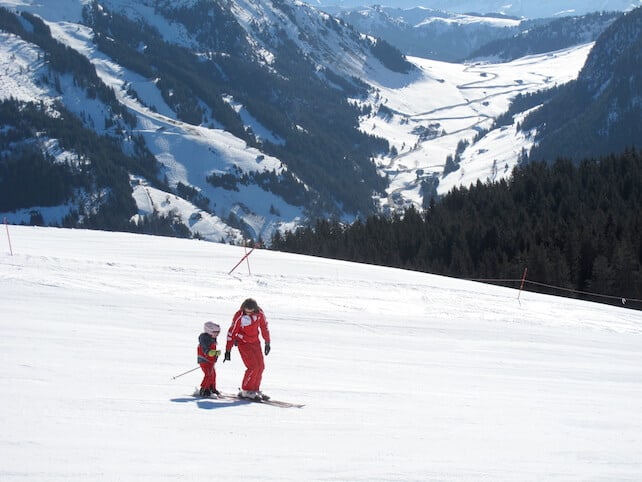 It’s a Good Choice for Families

The two villages together hold France’s Family Plus label, meaning they provide excellent facilities for children. A special beginners lift pass for the Manigod/Croix-Fry area starts at 10€ per day and offers gentle blue pistes and meandering paths through the pine trees. Lots of family activities are on offer, too – such as ski-joering (skiing while pulled along behind a horse), quad-biking on ice, and hot-air ballooning. You can also rent an igloo tent for a fondue evening, which is accessed on foot or by snowshoe from Croix-Fry. 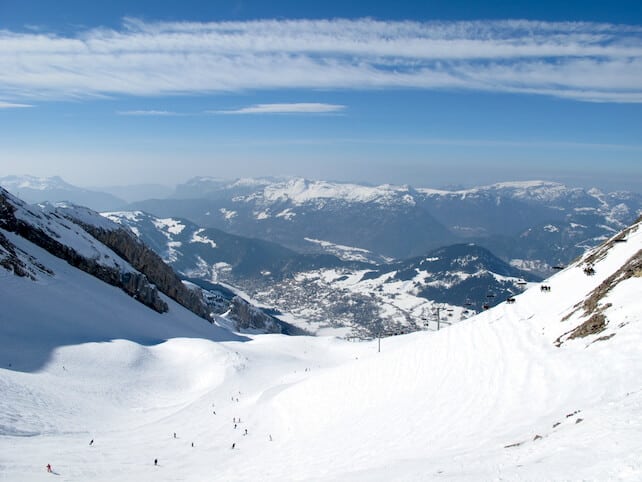 This is a testing area for strong intermediate and advanced skiers and riders. It’s further afield than the immediate gentler skiing above the village, reached via a long green path through the trees. As a result it tends to remain relatively uncrowded even in peak season weeks. It’s also the highest ski area here – rising to 2616m – with fabulous views of Mont Blanc. The skiing is in two steep-sided bowls in which piste and off-piste meld into one – all of it skiable, although sometimes quite mogulled. The only thing lacking here is the lack of a good mountain restaurant – just two self-services. 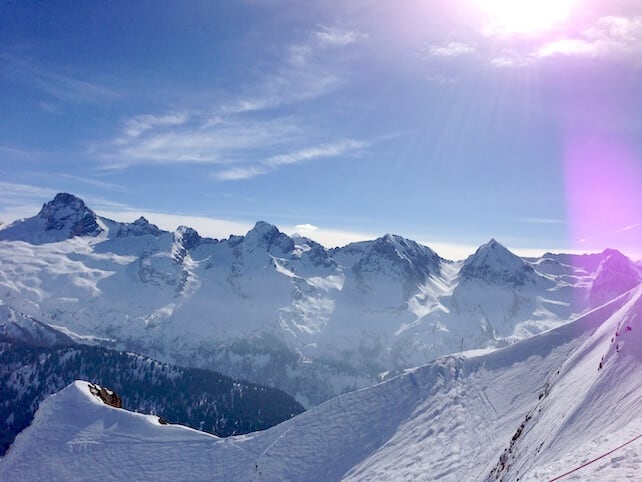 …and The Freeride Area of Le Grand Bornand

Ten minutes drive (there’s a bus service) from La Clusaz lies Le Grand Bornand, which, at first sight, looks like it has the sort of gentle fir-lined pastureland you’d find in a low-lying Austrian village. But don’t underestimate it. The front face does indeed have benign runs, but over the back there’s an extensive dedicated freeride area that is avalanche-controlled, but not patrolled by pisteurs – and is accessed by Le Lachat chair-lift. There’s also some tempting tree-skiing here after a fresh snowfall. 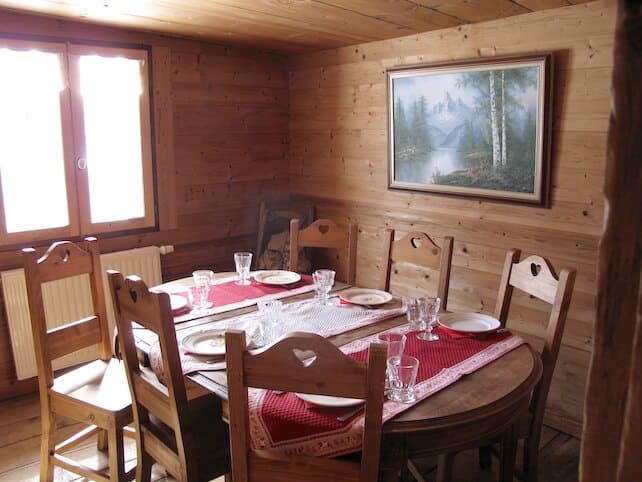 Apart from at La Balme, La Clusaz and Le Grand Bornand both have a wide choice of excellent family-owned restaurants, both on and off the mountain. This is the home of Reblochon and you’re never far from a raclette machine or a fondue pot. Prices here are cheap by the standards of most French resorts.

The Télémark Café on the l’Etale slopes above La Clusaz is a lovely place to soak up the sun in smart surroundings at a fraction of the price you’d pay in the better-known resorts of the French Alps. At the end of the skiing day head for Le Vieux Chalet in the Beauregard area for a vin chaud or hot grog (7€ each) on the attractive wooden terrace. On your way in – and out – watch out for the restaurant’s dog whose favourite game is to chase skiers.

Au Coeur de Village Hotel & Spa is the only five-star hotel in the region. As well as the 57 comfortable suites and rooms, it has a gourmet restaurant serving excellent cuisine. La Scierie – meaning sawmill, which it once was – is on the river with a stylish wooden interior and a good menu. Hôtel la Crémaillère is a charming family-run place with a restaurant that is warmly recommended.

In Le Grand Bornand, stop for lunch at the atmospheric Chalet Veney or, less accessible at the end of the Vallee du Bouchet 7km from Le Grand-Bornand, is La Ferme de Lormay (also known as Chez Albert) inside a 1786 wooden farmhouse. Also off the beaten track is Auberge du Croix, which is another old wooden chalet, with gorgeous views and food at reasonable prices. 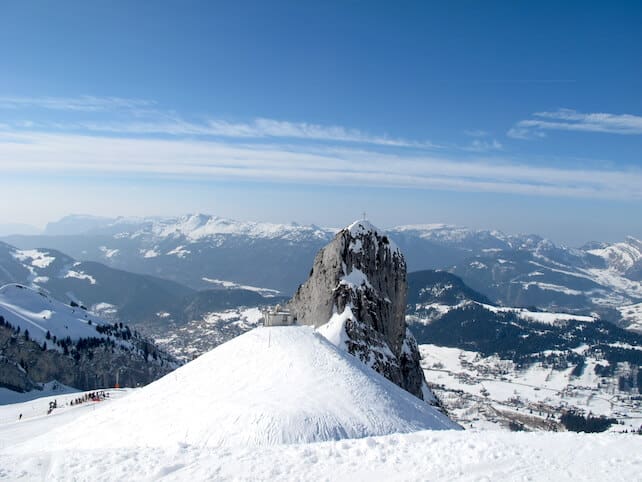 The Scenery is Fabulous

From the top of La Balme in La Clusaz you have a panoramic view of Mont Blanc and the surrounding massif. So spectacular is the vista that on a sunny day it is almost impossible to start the run without going to the viewpoint first. The Aravis Mountains, with the highest peak Pointe Percée and slopes threaded with fir trees, make up the backdrop to Le Grand Bornand. 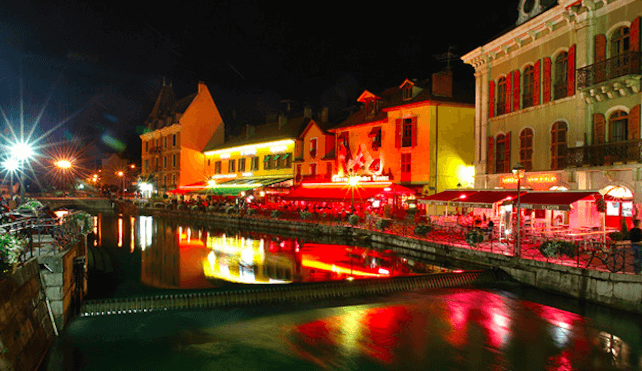 Lake Annecy and Geneva Are So Close

Bustling Annecy is a 30-minute drive away. Non-skiers or people who don’t want to ski every day should definitely make a trip to the gorgeous lakeside town. It’s close enough to go there for a few hours – we spent the evening walking around the beautiful town followed by dinner at La Voile in the Imperial Palace, where Winston Churchill, Edith Piaf and Charlie Chaplin all stayed in the past. The hotel has fabulous views of the lake and you can stop off here for a night en route to La Clusaz or Le Grand Bornand. 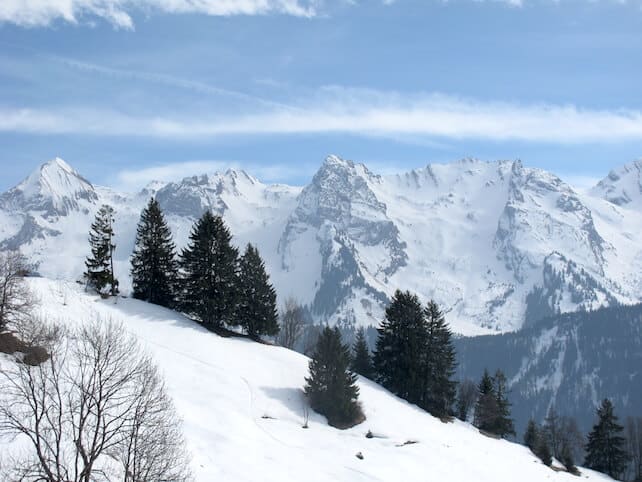 These traditional French villages are not well known outside France, so there’s no mass-market here – and the prices are consequently a lot lower than those in, say, Val d’Isere. For lunch at a mountain restaurant you can expect to pay around 12€ for pasta or plat du jour, 10€ for soup, 2.50€ for a glass of wine or soft drink, 1.90-3.80€ for a coffee.

Welove2ski stayed in the convenient and modern Les Grandes Alpes apartments overlooking the centre of La Clusaz and the slopes beyond. It is 400m from the lifts but if you hire from the piste-side Le Schuss ski shop you can store your skis and boots there overnight.

We rented a Fluid Car from Geneva Airport to drive to the resort and back. During your stay  the car is whisked away so that you don’t have to worry about parking in the resort. At the end of your week – or weekend – they’ll bring another car back to you for the return transfer. 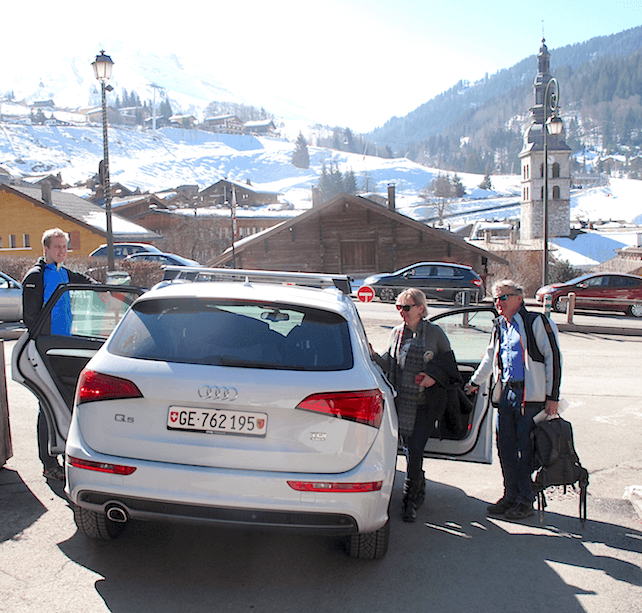 3 Responses to “What You Should Know About Lake Annecy Skiing”