Where to Party in Moena 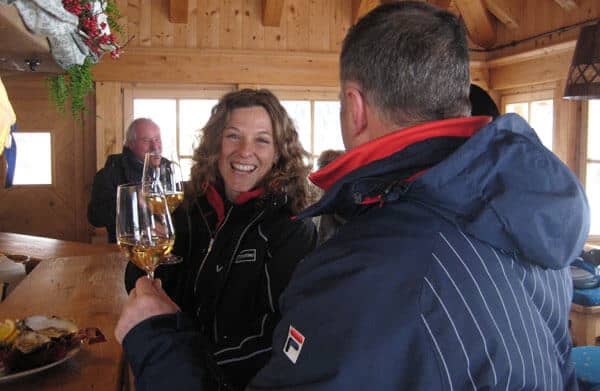 Don’t come to Moena looking for full-bore, wigged-out apres-ski in the style of Ischgl, St Anton, Val Thorens or Meribel. Moena is not that kind of place.

But if you’re idea of a day out includes a Bombardino or two on the slopes (see the mountain restaurants section), and a glass of the smooth and creamy Ferrari sparkling wine around 3.30pm – then you’re going to have a fine time here.

What’s a Bombardino? A mix of Vov (egg liqueur), whisky and rum, warmed up and topped off with cream – and when one of our editors skied here recently he was told it was the standard mid-morning pick-me-up. On reflection, he’s not sure how ‘standard’ it is at 11am (everyone else in the bar was drinking espresso), but it certainly spiced up the final hour and a half before lunch.

The place to drink Bombardino is in the Alpe Lusia sector of pistes, at a hut called Baita la Morea, on the long blue piste above Zirmo. For fizz, try chalet Valbona nearby which has an oyster bar. Make sure it’s Ferrari, not champagne by the way: it’s made locally, near the town of Trento, according to the méthode champenoise, and it’s much better than the standard non-vintage stuff from France.

If you’re skiing over in the Ski Center Latemar, the Zischgalm is the main gathering point for a mid-afternoon drink before heading back down the mountain.

Back in Moena, you’ll find several bars in the now almost-pedestrianised town centre – Bar Gabry, Kusk la Locanda and the Nibada Pub. Kusk la Locanda, on three levels, is by far the best of them. But don’t be fooled into the thinking the town is going to burn with the party spirit later on. If you long for a younger, noisier scene, jump in the car and drive up the Val di Fassa to Canazei instead. There you’ll find the Husky Pub and and Apres Ski Paradis: two of the busiest, buzziest bars in the Dolomites.

No Responses to “Where to Party in Moena”