7 Ways to Get Active This Summer in the Tirolean Alps 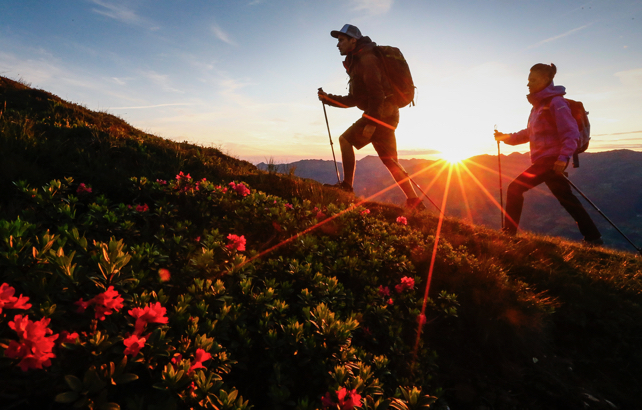 Hiking above Mayrhofen in the Zilltertal. Photo: © Dominic Ebenbichler/TVB Mayrhofen ©

Remember: no-one said you had to sit on a beach each summer. And if the idea of that bores you rigid, then – Ladies and Gentlemen – please step this way. Here in the Alps we like our summer holidays active – and we’ve got the terrain and the infrastructure to make almost every kind of mountain adventure possible. What’s more, you don’t have to be an expert or a fitness fanatic to enjoy them. Whether you’re a climber, biker or hiker, you’ll find easy routes and instructors waiting to build your skills and confidence. You’ll find lots of other ways to get active too: yoga, horse-riding, and family playgrounds among them.

Here are seven active-holiday destinations in the Austrian Tirol to whet your appetite. 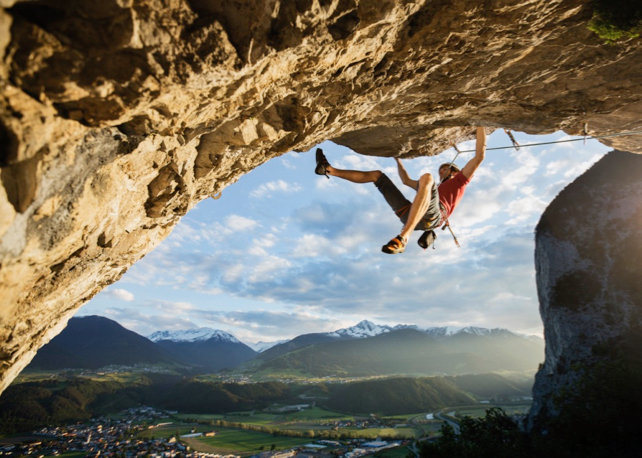 Rock climbing in a city? In Innsbruck it’s a cinch. The Tirolean capital is surrounded by Alps; and if you catch the Hungerbahn mountain railway from the city centre, you can be on the north face of the Nordkette in 30 minutes.

It’s worth going just for the view. The mountain rises so steeply above Innsbruck the city looks like a map. But climbers will also relish the chance to try some of mountain’s 40 sport-climbing routes.

Most are short, single-rope pitches. Several are beginner-friendly, and if you want to climb without worrying whether your cams, bolts and pitons are properly wedged into the rock, this is the place. Here, the protection is secured by drilled-in bolts. Purists may scoff at the idea. But it makes for joyful, carefree climbing. Use of the routes is free: but first-timers should book an instructor to show them the ropes.

Meanwhile, down in the city, the extraordinary Innsbrucker Kletterzentrum awaits: one of the world’s largest man-made climbing centres. Facilities range from first-time routes to world-class competition walls. If you’re a complete novice this is where to start. If you’re not, you’ll be dying to test yourself against some of the tougher lines.

Hiking in the Zillertal 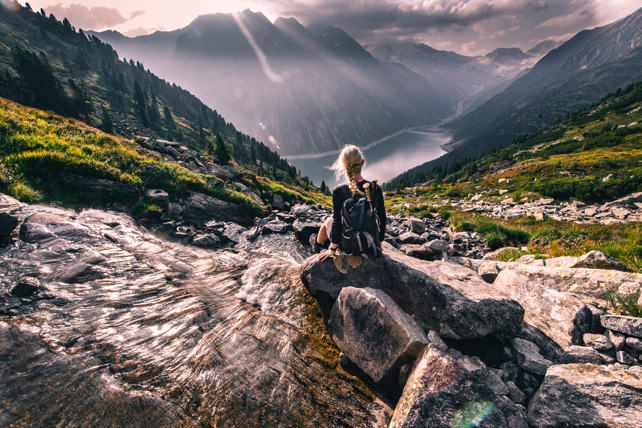 However you like your Alpine walks, the Zillertal has the trails to suit you. You can stroll along riverbanks with barely a metre of vertical ascent to slow your pace. Or you can jump on mountain lifts such as the Penkenbahn and Spieljochbahn to access high ridges without breaking sweat. And for those in search of proper exercise, there are mighty, multi-day hikes such as the eight-day Berliner Höhenweg, which links remote mountain huts and toils through 6,605m of ascent.

The key to all this choice is the Zillertal’s combination of protected landscapes and 21st-century holiday infrastructure. Dotted along the valley you’ll find buzzing resort villages such Mayrhofen and Zell am Ziller, with lots of hotels, guesthouses and holiday apartments dotted in between. Meanwhile, at the far end, the 379km² Zillertal Nature Park preserves and all-but pristine mountain wilderness. Nearby, you can also get a taste of how Alpine valleys looked before the advent of mass tourism – thanks to the Zillertal’s under-developed Zemmgrund off-shoot.

It is, in short, a heady mix. Just be honest with yourself about how tough you want your walking to be, and pick your base accordingly. As a general rule, the further south you go, the tougher the trekking. 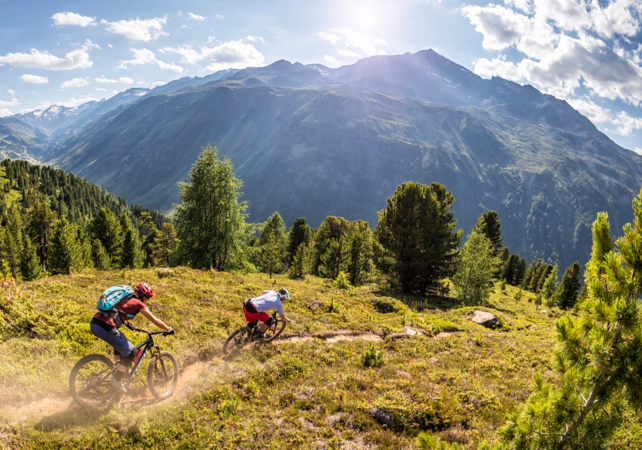 Since it opened in 2015, Sölden’s Bike Republic has mushroomed into one of the Alps’ biggest and most popular bike parks: home to 12 shaped downhill lines, 17 natural descents, 13 up and down enduro trails and 14 classic MTB tours.

Experienced downhillers will have a blast. It’s not just the quality of the individual trails that impresses, it’s their length. The longest descent links five trails to create a muscle melting 16km route, dropping through 1,313 vertical metres.

And if you love your bike but feel a nervous about attempting a full-blown descent, you can build up to one of the easy lines slowly. Two pump tracks and a training slope in the middle of the village will help you master your bike over bumps and lumps, while four mountain bike schools offer invaluable lessons.

Remember too that there are other ways to enjoy biking in the valley – including 14 classic MTB tours (there are a total of 43 along the whole of the Ötztal valley). The 5km Rechenau trail is one of the easiest. It keeps more or less to the valley floor on broad forest trails, and and climbs through just over 100m.

Farm stays in the Pitztal 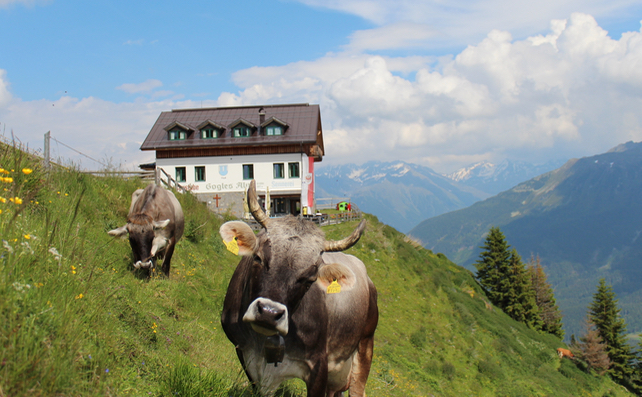 Each summer, 400 farms across the Tirol open to guests, offering either B&B-style accommodation or self-contained apartments. And whether you want to lend a hand with herding cows, collecting eggs, baking bread – or simply relaxing on some of the most beautiful agricultural land in Europe, you’ll find a farm to match your ambitions (or lack of them).

For those with little ones in tow, the Pitztal is a natural target. Dotted along this long, spectacular and under-visited valley, you’ll find several farms specialising in family holidays – as well as the child-friendly Zirbenpark adventure trail and the XP high-ropes course. At Wenns, for example, the Sennhof Huter organic farm has its own swimming lake and offers guided walks as well as the chance to collect eggs and feed the animals. Meanwhile, the Landhaus Raich in Jerzens specialises in horse-riding. You can sleep in its haybarn too. 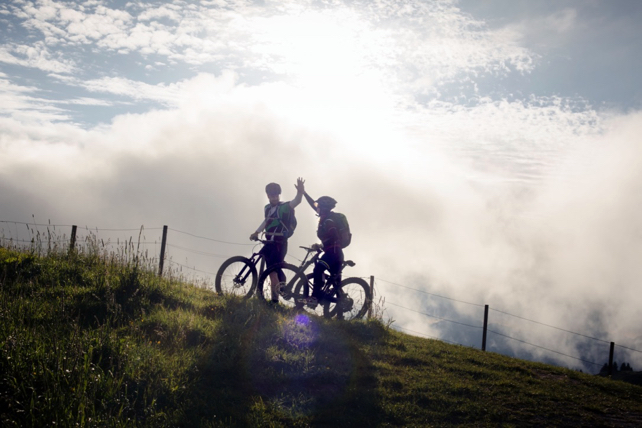 As you’d expect from its pretty, forest-and-meadow surroundings, Kitzbühel is full of mellow e-biking routes: and it’s well equipped with e-bike rental centres. It has an impressive network of cycling and mountain-biking routes as well: each one catalogued online, and then mapped and described in English.

Meanwhile, local mountain bike guides are waiting if don’t want to bother with route-finding yourself.

Not all the e-biking is easy. Among the tougher challenges is the steep ascent of the Kitzbüheler Horn, as well as a complete tour of the Kaiser Mountains, starting and finishing in nearby St Johann, and the 180km KAT Bike Trail – designed to be ridden in four stages. 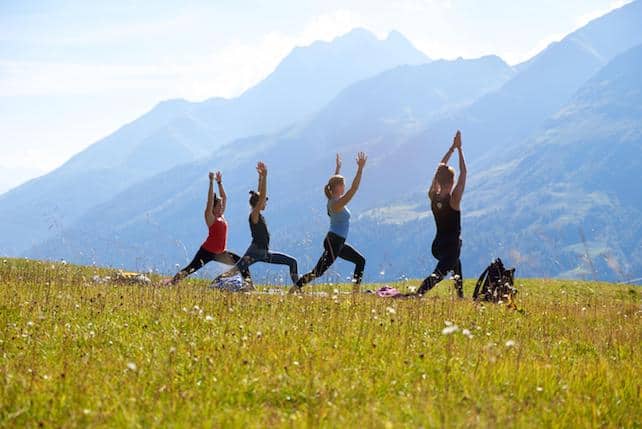 Thanks to the Mountain Yoga Festival in September (which celebrates its sixth edition in 2022), St Anton’s name is now firmly on the yoga map. Making use of both the surrounding mountains and resort’s Wellcom fitness centre, the festival ranges freely through this pretty resort with a busy five-day programme. Morning meditation, yoga hikes, workshops, studio sessions: they’re all featured, and attract an international cast of instructors.

The success of the festival has encouraged the resort’s year-round yoga scene. Since 2019, it has had its own yoga centre – arlflow – offering a daily programme of inexpensive group lessons, aimed at beginners as well as more advanced practitioners. In summer, daily yoga sessions are also offered to guests in the four-star Post, while private instructors are available through the likes of the Free Moving School. Here the instructors are open-minded about where they teach. So why not unroll your yoga mats in a meadow or on the side of a mountain?

Learning the ropes at the Hornpark, St Johann in Tirol. Photo © Mirja Get

One of the biggest recent changes in the Tirol’s summer scene has been the development of playgrounds and activities aimed specifically at younger children. In the SkiWelt, the Hexenwasser park led the charge: and turned an Alpine stream into an witchcraft-themed adventure trail for the under 10s, with 60 different features to explore.

The Hexenwasser makes for a fun day out if you’re staying St Johann in Tirol – a family-friendly holiday town between the Wilder Kaiser and Kitzbühel Alps. But it’s by no means the only attraction your kids will love. The town’s own facilities include a high-ropes course, as well as an indoor bouldering wall, the Panorama Badewelt swimming pools, a softplay centre and a downhill, gravity-driven karting course. Thanks to the off-duty ski lifts, spectacular mountain walks are easy, and there’s lots of easy cycling to enjoy as well. Mum and Dad might wish for a breather now and then: but the chances are their brood will be busy from the start of the holiday to the finish.