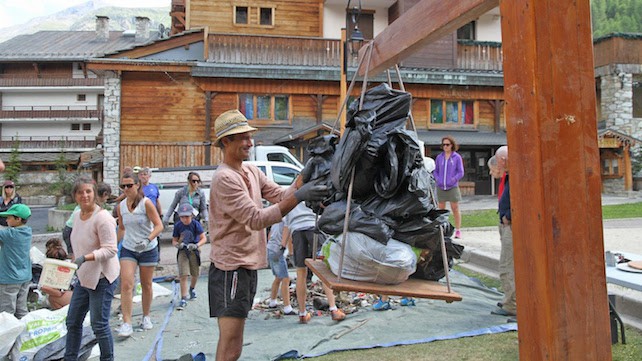 They expected 70 volunteers, but 124 turned up to collect litter from winter 2016/17 that lay scattered across the home slopes of Val d’Isere last weekend.

Operation Clean-Up, now in its 11th year, is by no means confined to Val. Other resorts, from Aviemore to St Anton clear up the season’s debris each summer before the snow falls once again. But was remarkable last weekend in Val d’Isère was that 95% of the crowd that assembled at the bottom station of the Solaise gondola were tourists.

As a puzzled reporter from Radio Val commented: “You need to get your head around this – imagine paying to go on holiday and then spending a day collecting the rubbish discarded by other unknown holidaymakers before you, over previous months and years.

“More and more tourists are becoming environmentally aware. We came across young Brits who are here working for tour operators preparing for next season. They were determined to restore the mountain to its beautiful natural state. Even some Russians on holiday in Le Fornet turned up, telling us: ‘Ok, one comes from Moscow, but there’s only one planet’.”

Shamefully, the locals were noticeable by their absence: “Their low level of participation still remains a mystery, considering that it’s their mountain and their meanings of earning a living.”

At the midday day weigh-in the tally came to a mighty 689k kg. This included 2kg of cigarette ends. But while the total number of butts may sound enormous, it was way down on previous years – a sign that less skiers now smoke while they ride the lifts. Down, too, where the number of bottles and cans. Us snow lovers, it seems, are slowly becoming greener.

Operation Clean-Up was organised by Association Vie Val d’Is, which supports employees of the resort and their families.

Also see our feature on the Green Ski Hotels.

One Response to “Skiers Becoming Greener”