Trail-Running in the Alps: A Beginner’s Guide 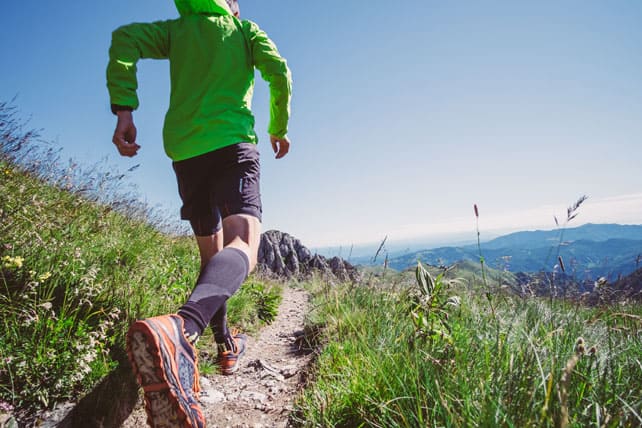 Have you heard? People are running up mountains for fun.

I’m not talking about a handful of mud-caked fell runners on the lunatic fringe of the Lake District. Thousands of people have taken up the sport of trail running, and its popularity has mushroomed.

Take the Ultra Trail du Mont Blanc (UTMB) in the French Alps by way of an example. When it launched in 2003, 722 runners took part in the 166km marathon, which climbs through a mind-boggling 9,500 vertical metres of ascent.

But before long, more than 7,500 competitors were taking part in the seven races that now make up the event – which stopped for only one year (2020) during the pandemic. There’d be many thousands more if they weren’t weeded out by a points system (which you accumulate by running in other races first) and a ballot. Host town Chamonix is busier during race week than at any other time of the year.

Which begs the question; has everyone been drinking too much Red Bull? And what good could possibly come from such an activity – apart from vomit and blisters?

That’s what I went to Chamonix to find out. I wasn’t going to join the UTMB: it would probably kill a part-time jogger like me. Instead, I signed up for a training camp aimed at the first-time trail-runner. British guiding company, Icicle Mountaineering runs several each summer.

This is what I learned.

1. Running up mountains is INSANE

“How much running do you do at home?” asked Icicle’s running coach Kingsley Jones when I applied to join the camp.

“10km a couple of times a week,” I said, which was a lie. I was managing barely half that. But that’s okay, I thought. They’re bound to break us in with a day of gentle jogging.

They didn’t. On the first morning, Kingsley pointed to a vivid green peak immediately above town, called Le Signal Forbes. It was a mere pimple on the side of the Mont Blanc massif, but a 2198m pimple nonetheless. Chamonix is set at roughly at 1000m. “Today,” he said, “we’re running up that.”

It was a self-evidently insane idea. You might choose to walk up a such a peak – carrying half your bodyweight in cheese sandwiches and Lucozade. But running? Standing at the bottom, beneath an almost sheer wall of trees, it seemed like a deliberate contravention of the laws of nature. I looked at my fellow “beginner” for support – a softly-spoke Dane called Paw.

“Brilliant,” said Paw in flawless English. “Let’s do it.”

2. Most of the time, you’re not actually running

So we set off up a forest track, wide and smooth enough to take Land Rover. Pretty soon, however, the trail boiled down to a rocky footpath – picking its way through the trees and boulders with all the zig-zagging intricacy of a mountain goat.

To start with, I’d been doing all right; especially after Kingsley had stripped my running style back to that of an octogenarian ninja. In the name of “smarter running”, I was taking small, gliding steps, and trying not to bounce or skid, so I didn’t waste energy. He’d also leant me a pair of Pro Trailer Original running poles, so I could boost myself upwards with a double-handed push.

Now he told me the secret of trail running is that everyone walks at some point on a route. It wasn’t so much the speed, he said, but the relentlessness of the pace that was important.

In other words: “No, Sean: we’re not stopping for a sandwich.”

3. There isn’t enough air in the Alps to fill your lungs 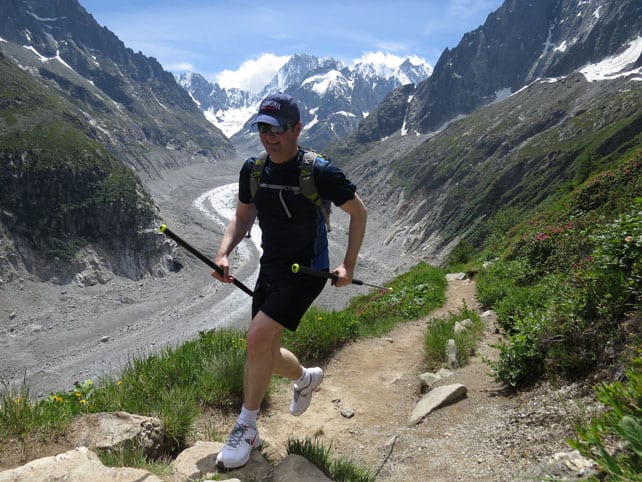 Don’t believe this photo. The author running (for about five seconds) near the summit of Le Signal Forbes, Chamonix. Photo: (c) Welove2ski.com

You know how it is when you get home from a big run, and you’re sitting in the hallway, chest heaving, with the world shrunk down to the next breath? Well, that’s how it was for the second half of my two-hour ascent: a dizzy, gasping blur as I crammed every last alveolus with air, and still needed more.

By the time we reached the top, I could barely walk, let alone run. And I have no recollection of what the view was like. Did I even look? I was probably too busy gulping water. Oh yes, and faking a photograph, above, which made it look like the run was a doddle.

But note that time. We’d climbed the equivalent of Snowdon in two hours.

They don’t tell you about the downhill part. Fun for about five minutes, it quickly turns into knee mashing, body-cracking torture.

Kingsley explained that I was suffering because I was trying to resist gravity, and needed to let myself go. “Run down on the balls of your feet,” he said, “so that more of the impact is transmitted through your calves, hamstrings and bum, rather than through your knees and quads.”

But I was already too tired to listen. By the time I got to the bottom my muscles were so spent my legs were shaking harder than Scooby Doo when he meets a ghost. I couldn’t make them stop. We just stood and watched them vibrate.

5. Then, suddenly, you acclimatise

I don’t want to talk about Day Two.

But on Day Three, the weirdest thing happened. I woke up feeling lighter and more alert than I’d done for years. It was as if my body had been roused from a ten-year slumber.

What’s going on?” I asked Kingsley, as we started up the 2581m Testa della Tronche, on the Italian side of Mont Blanc. “You’ve started to acclimatise,” he said. “It was obvious as soon as I saw you this morning.” I was still Captain Slow: dripping with sweat, gasping for breath, smelling of armpit. But my progress was more constant, my attitude more positive, and my mind open at last to the beauty of my surroundings on a flawless midsummer day. 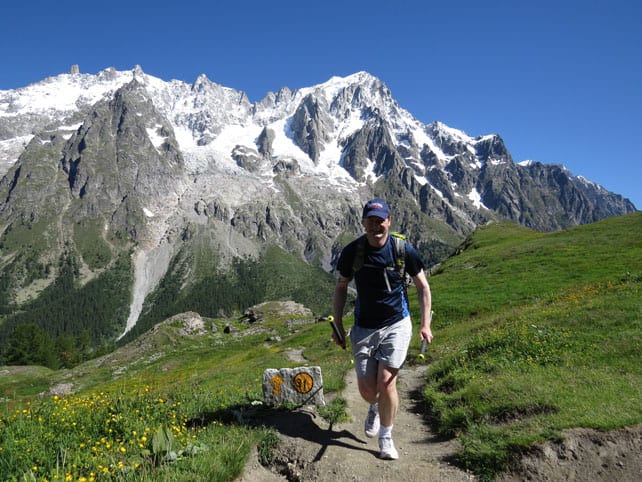 This time, for real. Day three on the Testa della Tronche. Photo: Welove2ski.com

Then, as we came off the peak of the Testa, Kingsley showed me how proper trail runners get downhill.

We started with a jog, which became a canter, and finally a headlong rush, of a kind I hadn’t experienced since I was a kid – eyes wide, arms flailing, my mind a nano-second ahead of my feet as I looked for a safe landing. It was three parts exhilaration, two parts terror, and absolutely addictive.

When we got back to the car the very last thing I wanted to do was stop.

6. That’s when you fall in love

Maybe love is too strong a word. But jeez: the sense of euphoria I got on that June day lifted me up and carried me all the way to the beginning of August. And I was both astonished, and excited, by the discovery that my body was capable of such feats. It was as if I’d shed some kind of crusty old skin and emerged, blinking into the light – a newer, fresher version of myself.

So yes, I now understand why trail-running is so popular. Now my question is this: why isn’t everyone doing it?

Sean Newsom travelled courtesy of France.fr and the Chamonix tourist board, and stayed as a guest of the cool and convenient Hotel Faucigny. Icicle Mountaineering offers trail-running camps in Chamonix in July, August and September. 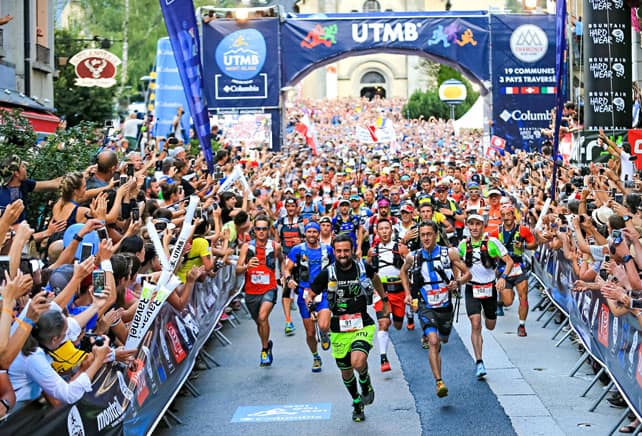 I told you trail running is popular. The start of the Ultra-Trail du Mont Blanc in Chamonix in 2016. © UTMB® – photo: Franck Oddoux

*You’ll save yourself a lot of pain on the first two days if you train properly beforehand. You really do need to be running 10km a couple of times a week.

*I managed in my running shoes from home. Just make sure you’ve got a bit of room in the toes, as your feet will be hitting the front of the shoes on downhill stretches.

*Mountain Hardwear gave me a lightweight trail-running rucksack and waterproof jacket for the trip. Both were absolute godsends – because every gram of weight turns into an ounce once you start climbing.

*Kingsley’s running poles were brilliant too. I wouldn’t try running up a mountain again without my own pair.

No Responses to “Trail-Running in the Alps: A Beginner’s Guide”