Seven Sustainable Hotels for a Green Summer Holiday in the Alps 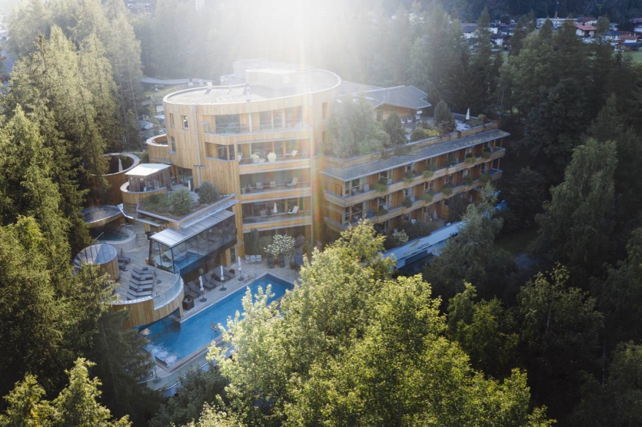 What’s the best thing about a summer holiday in the Alps? That’s an easy question to answer: reconnecting with Mother Nature. Yes, the many ways in which we can run free are also amazing, whether we’re hiking, cycling, swimming or climbing. But above all, it’s the simple pleasure of being outdoors – in such beautiful and dramatic surroundings – that makes mountain holidays memorable.

So it makes sense to stay in a sustainable, environmentally-friendly hotel when we go. After all, we all want to enjoy this magnificent part of the world for years to come.

Here are seven hotels in the Austrian Tirol that have rolled up their sleeves and embraced the need for change with both enthusiasm and intelligence. 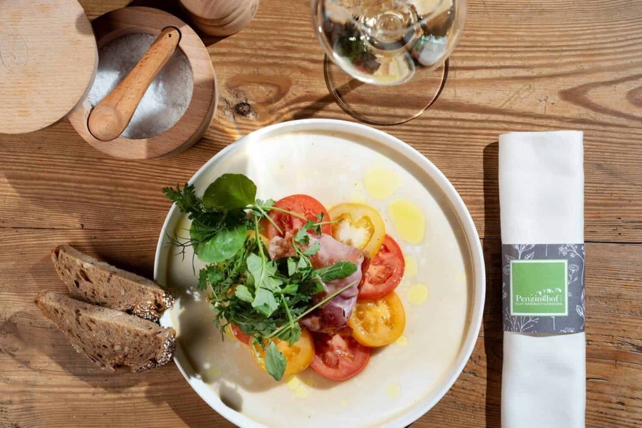 The concept of zero-kilometre cooking – which encourages restaurants and hotels to source all their ingredients locally – has extra heft at the Hotel Penzinghof in Oberndorf. Set just south of St Johann in Tirol, on the slopes of the Kitzbüheler Horn, the hotel has its own farm, which supplies it with dairy products – yoghurt, cheese, butter and goat’s cheese – and a range of schnapps from its still. The hotel’s lamb, beef and venison comes from the neighbouring district of Pinzgau.

Meanwhile, the hotel and its farm have replaced their oil-fired heating systems with a sophisticated biomass burner and heat-recycling system. In doing so, they’ve replaced 95,000 litres of fuel oil each year with sustainable wood chips (and cut their costs by 20% in the process).

Of course, in summer, you won’t be needing too much of that man-made warmth. This is a lush and lovely part of the Alps: deep green in summer, and brimming with hiking and biking trails. You’ll be much more interested in the hotel’s chemical-free, swimming pond (with a herbal fragrance garden next door) than the central-heating system. 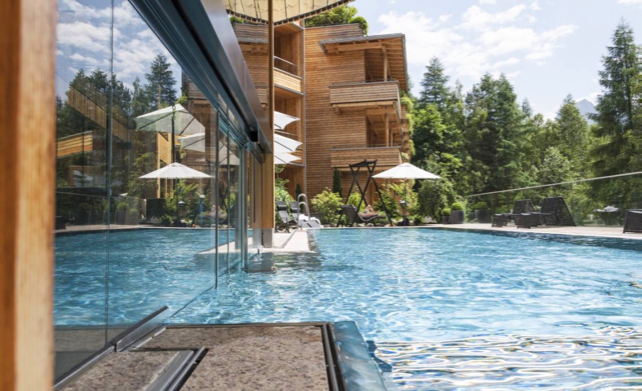 Veiled by trees on the valley floor at Längenfeld in the Ötztal, the five-star Naturhotel Waldklause is green from the ground up. Its sinuous, curvy architecture is based not on concrete but on solid, glue-free wood – harvested from local forests wherever possible. It has been insulated with Tyrolean sheep’s wool too. Heating comes from Längenfeld’s own biomass power plant, while electricity is sourced from certified CO2 energy sources.

Meanwhile in summer, the hotel looks green too – with walkways amongst the trees and plants sprouting from pots on balconies and rooftop terraces.

With so much comfort and beauty on the doorstep the temptation is to stay put – relaxing in one of the spacious rooms, or luxuriating in the hotel’s Naturspa. But that would be to miss the point of a summer holiday in the Ötztal. The 67km valley is a giant playground for mountain lovers, with walking, mountain biking and e-biking trails in every direction. And when you’re done being active, a soak in one of the giant spa pools at the Aqua Dome is a must. It’s right next door to your hotel. 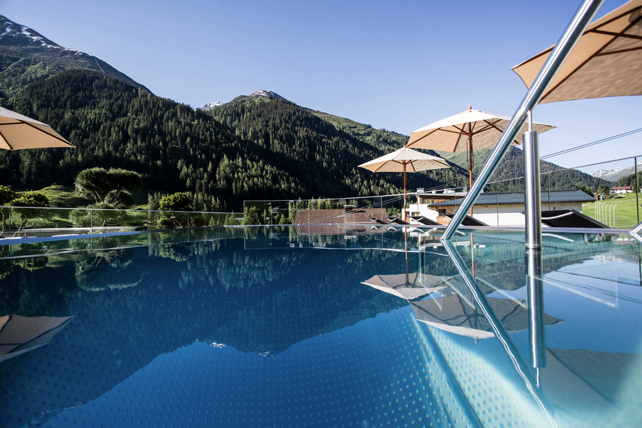 Since 2006, the St Anton has generated all its own electricity. Thanks to a hydroelectric power station that uses water from the Kartellsee reservoir, it produces around 33 million kilowatt hours of electricity a year. So the environmental credentials of this famous mountain resort are already good – and they’re burnished further by the mainline railway station right in the middle of town. With fast trains to both Zurich and Innsbruck (and most of its hotels within walking distance of a lift), it’s a resort that makes cars unnecessary.

But the Hotel Arlmont doesn’t rest on those laurels. The sleek and contemporary four-star superior hotel has instituted many environmental practices of its own. All its heating comes from a wood-chip burner facility which is supplied from sustainably-managed local forests (saving 50-70,000 litres of heating oil each year). Extra electricity is generated from the hotel’s own photovoltaic cells too – and is fed back into the grid if the hotel doesn’t need it.

It is, in other words, a reassuring place to stay, as well as luxurious one: and you’ll find many ways to celebrate the magnificent surroundings whilst you’re here – from big hikes on the Alpen Rose Trail to an invigorating swim in a mountain lake. 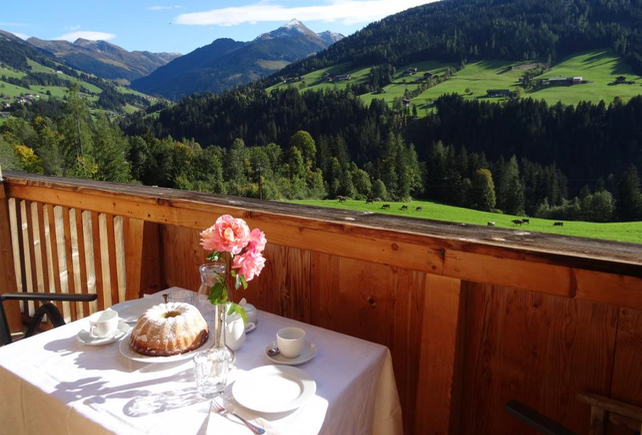 Perhaps we shouldn’t be surprised that Alpbach has Austria’s highest density of environmentally-certified hotels, B&Bs and apartments. After all, it is widely acknowledged as of the country’s prettiest holiday villages: one which is especially lovely in the summer.

But even amidst such pro-active and environmentally-committed company, the Gästehaus Larch stands out. Solar panels heat its water, a pellet-burner (using local wood) warms the rooms, and photovoltaic cells provide the electricity (when the sun’s out at least). Meanwhile rainwater fills the WC cisterns and waters the garden.

Another benefit is the fact that the Gästehaus Larch sits on the edge of the village, offering easy access to the valley’s hiking and biking trails. After a breakfast that draws heavily on local ingredients all you need do to get started each morning is walk out of the front door. 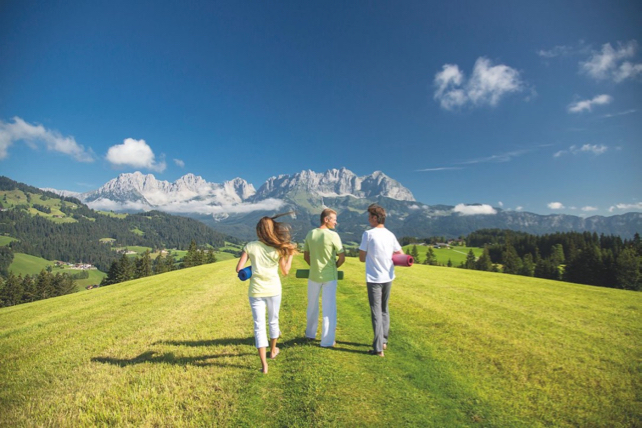 Set amidst mountain pastures and forests above Reith bei Kitzbühel, the Bio und Seminarhotel Pointner has long been a trailblazer for good sustainable practice. Since 1995, the owners’ farm has been organic. Since 2002 all its electricity has come from Oekostrom’s green renewable energy sources. And since 2008 all its heating requirements have been supplied by a pellet-burner, supplemented more recently with solar panels to heat the water in summer. Other notable features include its carbon dioxide-offsetting programme, and a long-established vegetarian restaurant, well-supplied by a vibrant kitchen garden. What’s more, you’re only four miles from Kitzbühel’s well-connected railway station. In every respect, a green holiday awaits, with a little yoga perhaps in the family’s Sivananda retreat, next door. 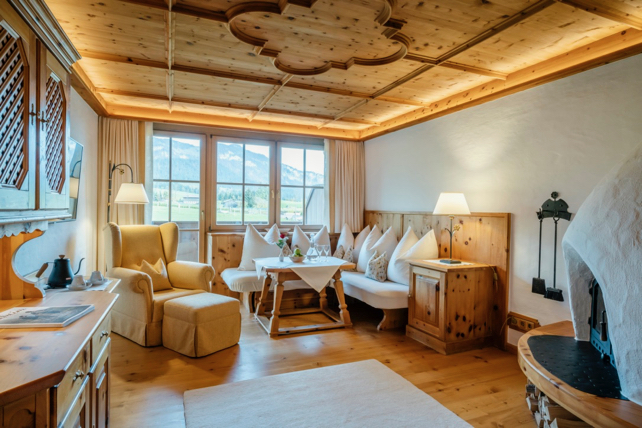 The five-star Stanglwirt may well be a byword for luxury in the Wilder Kaiser region, but since 1980 it has run its own biomass power plant which burns bark waste from local sawmills. It is now so powerful and efficient that the temperature in the combustion chamber reaches 800 to 1000°C. At that temperature very little in the way of waste gas is produced. Meanwhile, all its electricity is 100% CO2-free – courtesy of Ökoenergie Tirol – while green building practices mean that bricks and shingles are fixed with lime mortar, not cement. There’s even a natural swimming lake by the hotel’s vast Green Resort Spa.

And here’s another way to get a taste the Stanglwirt’s good environmental practice: at breakfast. All its milk, curd cheese, butter, yoghurt, cheese and bread come from its own farm. 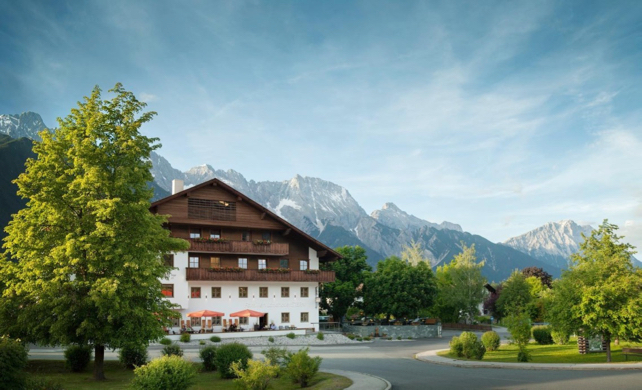 Set on the sunny Mieming Plateau, just south the Inn valley, climate-neutral Der Stern works hard to reduce its environmental impact. Among its many sustainable measures is a biomass plant that burns local wood chips and a green travel incentive that gives holidaymakers a 5% discount if they come by train. All its eggs, yoghurt, milk and bread come from Mieming Plateau too. But what really singles it out is the imagination and sense of fun it brings to the job of being green. Here, you can splash in an indoor eco-pool, go larch-bathing in the hotel’s forest garden, and spend a night in a hay barn. Meanwhile, at the kids’ club, dam-building, fire-making and campfire-building are all on the menu.