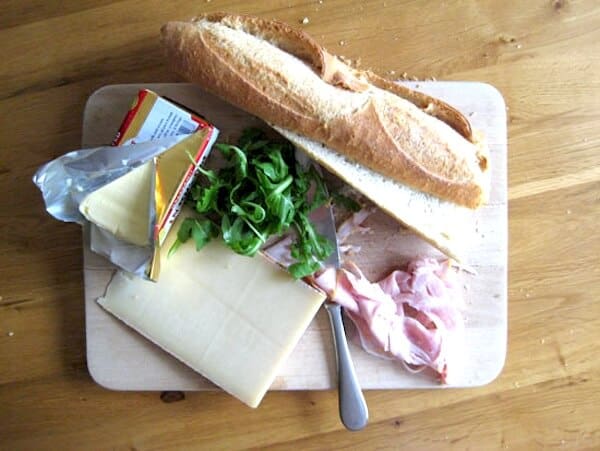 Now, where did I put those cornichons?

Of course, we’re not talking about just any old cheese and ham. We took advice from Holly Fisher of the cook-tastic chalet operators, Fish&Pips, and decided that it had to be jambon blanc and Gruyere, along with a touch of lettuce for texture and a dab of that nice mustardy mayonnaise the French do. All served in a fresh baguette: and pulled from your rucksack beneath a faultless blue sky on a mountain somewhere stunning.

But that was before we floated the idea on Twitter and Facebook. Now we’re not so sure. Some of the fillings suggested below look a little fiddly to us. After all, who’s going to waste time roasting peppers when the sun’s out and the snow is soft and crumbly? But we can’t deny there have been some mouthwatering suggestions.

We thought ham and cheese was the ultimate combo, but you might beg to differ

These are the best we’ve seen so far:

“Tomme de savoie and saucisson sec, in rustic baguette eaten in the sun near a pricey restaurant” – Heather and Andy at Alpine Ethos.

“You can’t beat adding some crispy french fries to any cheese based sandwich for the ultimate finishing touch. What makes it even better is that you can sit enjoying the sun in the restaurant’s deck chairs as you’ve made a purchase!” – Philli on Welove2ski’s Forum.

“A piece of wood wrapped in fibreglass. Salt and pepper to taste. Call It a ‘K2 triaxal braided Extreme Sub’. It will satisfy ANY hunger!” – David Longdon on Facebook. (Hmm..sounds a bit indigestible…)

Some people have strong views about the extras too – especially Amin at Momentum Ski. He recommends: “Pickled gherkins in all sandwiches – but not sweet English ones. Conrnichons will do but the best are from Israel”. He also says; “Whatever the sandwich DO NOT SPOIL IT WITH BUTTER.” (Huh? A sandwich without butter, Amin? Coffee without water?)

Forum poster Jon H recommends: “A great big dollop of Dijonaise (a blend of Dijon mustard and mayonnaise) to go with ham and cheese. Finally, for that truly authentic skiing feeling the sandwich should be squashed flat having spent the morning being compressed in your backpack.”

“Actually you cannot beat a great Welsh rarebit with masses on Lea & Perrins…” and “You cannot compare any French cheese found in a Croque Monsieur to the best Mature Cheddar found in the perfect Welsh rarebit – and I am not even Welsh!” says former Meribel resident Colin Mathews on Facebook.

Forum poster JYS says: “The fourth Earl must be turning in his grave. No wonder foreign doesn’t have a word for sandwich. Swiss cheese, Italian ham, Israeli gherkins, French fries… It sounds like a League of Nations food parcel.   And in a baguette? You need the jaws of a python to eat a baguette sandwich. The ratio of bread to filling is too high, the crust hurts your gums, and the contents fall in your lap.  No, in a couple of slices of buttered pain complet any filling will taste good and end up in your mouth, not on your knees.”

BUT BUT BUT the best contribution of all so far is Sebastien Montaz-Rosset of Chamonix Guiding. As well as being a UIAGM guide, Seb is a talented film-maker. And get this: he’s just made a ski sandwich film.

2 Responses to “The Ultimate Ski Sandwich”