Guide to the Mountain in Valloire 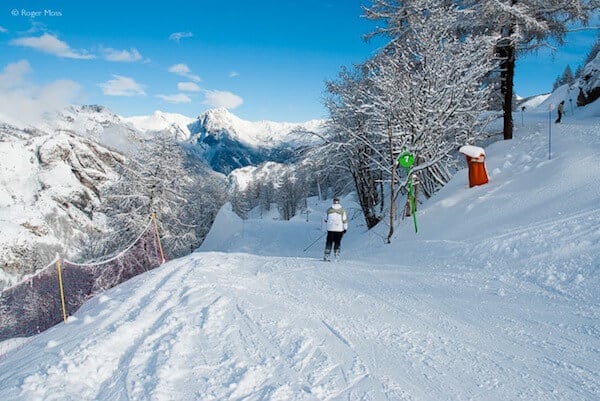 A significant plus-factor for both Valloire and Valmeinier is the provision of gentle, green-graded pistes from the higher terrain all the way back to their respective villages (although their connecting runs are for confident intermediates). The one exception is the Moulin Benjamin area, whose final return run is graded blue, although in practise this poses no major problems, since regular free shuttle buses run between all three sites.

We reckon that you’re going to be as surprised as we were by the extent and variety of the possibilities for intermediates, particularly when you venture over to ski the further terrain above Valmeinier. Locally, the terrain is centred on two areas, each served by high-speed gondolas.

Plenty of skiing for intermediates

The Setaz sector tops off at 2436m, the last leg of the climb via a steepish drag-lift, as the magnificent viewpoint is exposed to high winds. Below, though, the gondola and chair-lifts access a good selection of red, blue and green pistes which wend their way down through the tree-line on both faces of the massif – the west side being relaxing, while the eastern face (apart from a lone green) is significantly more testing.

Take the Crêt de la Brive gondola, on the other hand, and things are a lot more even-handed on the respective faces falling away beneath the 2534m Crey du Quart. There’s a quite remote feeling, too, as you work your way south to the mostly blue terrain below the Grand Plateau (2524m). The long, winding Selles in particular will please fans of scenic cruising – as will what lies on the massif’s eastern flanks.

Here you’ll find a choice of five reds, but it’s the blues which really make a lasting impression, as they take you all the way down to the valley of the Neuvache river, beyond which lies Valmeinier. Accessed either from the north or south, there’s drama to the liaison, the latter having, we feel, the dramatic edge, thanks to the two-way Armera chair-lift’s vertiginous, slow passage across a wide gorge. But make a point of experiencing both links during your stay, and pressing on to explore the fine cruising terrain fanning out from the 2594m peak of Le Gos Crey. Unlike Valloire, even the lower runs are largely devoid of tree-cover, creating a very different skiing experience.

…and for advanced skiers

Although known and marketed first and foremost as an intermediate’s area, any more advanced skiers here in a mixed-ability group won’t be easily bored when they leave their companions and look for more challenging terrain. Locally, you’ll find the best concentration of advanced terrain is on the eastern side of Setaz – just turn left at the top of the slightly antiquated Setaz 2 chair-lift for a couple of blacks, with another one accessible by taking the topmost drag-lift.

Dahu and Cascade offer long, bracing drops (the latter with an alternative feed from the red-graded Tetras. If your legs are in good shape at the bottom that’s good news, for the return haul is a long and initially steep one, on the Cornafond drag-lift. If not, you have a green-meets-red option which will drop you back to the village, at the base of the Sétaz gondola (alternatively you can continue round to Moulin Benjamin or even Les Verneys).

Once you’ve got this out of your system you can head over to Le Grand Plateau for a change of scenery and a couple more blacks: Meregers and Cotérieux. The latter feeds into the Valmenier sector, which is home to Grandes Drozes, one of the combined area’s more challenging black runs. Finally, across the valley there’s just one black: Grand Choulet, which falls away steeply from Le Gros Crey and eventually eases to morph first into the red-graded Lys, then again for a green run into Valmeinier 1800.

The off-piste potential is more limited than it looks

As the local ski instructors are keen to point out, the away-from-it-all off-piste potential here can be more limited than it appears, due to avalanche risks posed by the steep pitch of some of the valley sides above some of the most tempting sites. On powder days, though, there’s plenty of scope from the Setaz, Grand Plateau and Crey du Quart, which you can tackle with the reassurance of knowing that you’re unlikely to get lost, as eventually you’ll pick up one of the long blue return runs. There’s also some particularly idyllic wooded terrain below the Armera piste, a long perimeter run which winds its way over to the lift link with Valmeinier 1500.

One Response to “Guide to the Mountain in Valloire”