Where to Learn: British Ski Schools in the Alps 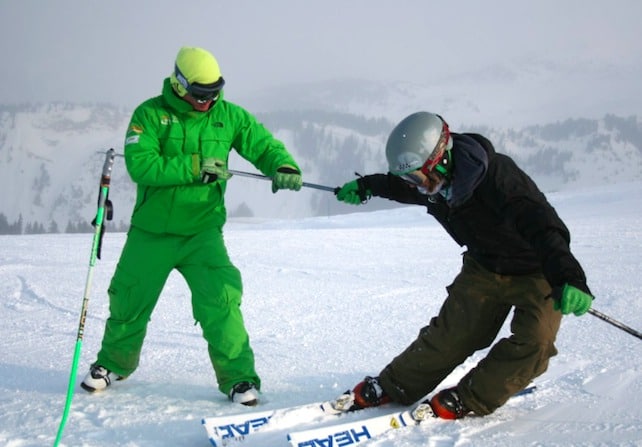 Going skiing but feeling nervous about your first ski holiday? Or is your skiing stuck in a rut? Either way, tuition from one of the many British ski schools will make a big difference to your learning experience.

It always helps to pick a ski school where they speak your mother tongue as a matter of course. It doesn’t guarantee brilliant tuition, of course – though in our experience, British ski schools are usually highly-motivated and painstaking in their approach. But at the very least, booking British means you’ll understand what’s going on – and not just because your teacher can manage a few more words than “Bend ze kneez”.

Idiom and culture can make a big difference too and it’s a great help to be taught by someone who’s on more or less the same wavelength as you. It’s reassuring too: for first timers especially, ski resorts can be strange and confusing places. Signing up with a native English speaking teacher is a great way to get yourself back on an even keel.

Over the last decade, the number of British ski schools in the Alps has mushroomed. Some are one-man outfits. Others employ instructors by the dozen. But nearly all offer a range of private clinics and group lessons from complete beginner to expert. But be warned, many of them book up quickly for the busiest weeks. See our features on how to pick a ski or snowboard school and How to Keep Improving for further advice.

A number of schools have now branched out into more than one resort and country. New Generation is in Courchevel, Les Arcs, La Tania, Meribel, St Martin de Belleville, Serre Chevalier, Tignes, Val d’Isere, Vallandry – and also Verbier in Switzerland.

Altitude is in the Swiss resorts of Grindelwald, Verbier and Wengen. Alpine Training Centre is in Hintertux, Verbier, Wanaka in New Zealand, and at Cairngorm Mountain in Scotland.

In the 3 Valleys there’s Marmalade Ski School and Parallel Lines in Meribel and Courchevel is home to Supreme Ski.

Others in France include Masterclass in Alpe d’Huez. Avoriaz has Alpine Ski School and Stance – the latter is not, strictly-speaking a British ski school, but one with French and Kiwi instructors aimed at the British market. Powderama is in Chamonix.

In Austria there is Piste to Powder for off-piste skiing in St Anton, and Kaprun has Skivolution. In Italy, tour operator Ski2 has its own ski school in Champoluc. Courmayeur has Interski. Baqueira-Beret in the Spanish Pyrenees has Baqueira British Ski School (known as the BB Ski School).

Snoworks and Inspiredtoski hold courses in a changing selection of resorts.

9 Responses to “Where to Learn: British Ski Schools in the Alps”

Ski and Pamper in The Alps
100 %
Tweenager Tips: How to Enjoy Ski Holidays with Older Kids
98 %
How to Go Green On Your Ski Holiday
98 %
St Anton, Austria: Wild Nights, Steep Pistes and Challenging Backcountry
97 %
Weird and Wonderful Ski Fads and Fashions
94 %
© 2020. All Rights Reserved. Created with love by WL2S