Guide to the Mountain in Aspen 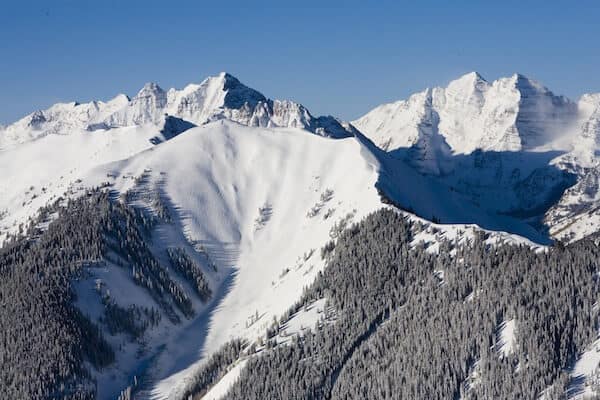 The four separate mountains of Aspen, spread along the Roaring Fork Valley, offer the world’s finest intermediate terrain. There are some great nursery slopes here too, and – for an American resort – lots for more advanced skiers and boarders (though Jackson Hole has more – and there’s nothing like what’s available in Verbier, St Anton and Chamonix in the Alps).

The first mountain is Ajax, with the town of Aspen at its base. Beginners should steer clear of it – and nervous intermediates too, until the end of the first week of their holiday. There are some nice groomers here, but they tend to be steeper than elsewhere.

Great for bumps and groomed trails

The people who will really appreciate the place are bump-skiers. There are mogul fields all over the mountain – and some real stomach-in-your-mouth steeps between the Little Nell and Strawpile blues.

Next up is Highlands. The groomers here are, in our humble opinion, the best on the planet. At the top you’ll also find Highland Bowl – Aspen’s most challenging expert terrain and home of some of the steepest in-bounds skiing in America: the pitch varies between 38 and 48 degrees.

An (almost private) mountain for beginners

Third is Buttermilk. This is the beginner’s mountain, but it’s also home to the best terrain park in the valley (where the X-Games are held each winter), and some stupidly under-used steeper trails too.

Last but certainly not least, is Snowmass, the largest single ski area of the four with the widest variety of terrain. It also boasts the biggest vertical drop in America. It also has its own purpose-built, ski-in, ski-out village at the bottom (super convenient, but lacking the charm of Aspen town). There’s something for everyone over here – when there’s been a dump we’d head straight for the open powder fields at the top of Big Burn.

Incidentally, something worth stopping at are the very unique Shrines of Aspen. These 51 memorials range from Elvis, Marilyn Munroe, Jimmy Hendrix and Jerry Garcia to Frank Sinatra, Liberace and 9/11. The displays are hidden away in the woods at the sides of the trails on all the mountains (but most are on Ajax) and are packed with interesting memorabilia and dedications. Unless you asked, you wouldn’t know they were here at all.

Beginners get what is more or less their own private mountain at Buttermilk. It’s the smallest of Aspen’s four ski areas, and home to its gentlest slopes. What’s particularly good about it is the fact that there are top-to-bottom beginner runs, which you should be skiing/boarding by your third day. So you won’t spend your whole trip stuck at the bottom of the mountain, feeling like a second-class citizen.

Hardly anyone comes here, and if they do, they steer clear of Buttermilk. Which means you don’t get the unnerving experience of having young bloods tearing past you at what seems like 150mph.

All, in all, its a compelling package – especially when you add Aspen’s sunny weather, and beautiful scenery, into the equation.

For intermediates, Highlands is God’s own skiing country

Honestly, we can’t think of another place that can match quality of the grooming, the inviting pitch of the slopes, the width of the runs, the big vertical interval between top and bottom (1110metres/3640ft), and the blissful lack of crowds. By the end of your first morning blasting about here, you’ll think you’re Bode Miller.

For this reason alone, Aspen is a place of pilgrimage for intermediates. But of course, there’s a lot more on offer here. Away from the terrain park and the beginners’ slopes, Buttermilk also has some beautiful groomers, which are even quieter than the ones you’ll find on Highlands. There’s some fine terrain to be found over on Snowmass too. The only mountain we’d avoid is the one immediately above Aspen – at least until the end of the trip, when you’re feeling really salty – because the trails here tend to be steeper.

What Aspen really lacks is open, upper-mountain bowls, which aren’t too steep, and on which skiers and snowboarders can practice their powder technique. Your best hope is pray for a dump, when Aspen’s deserted trails (especially on Buttermilk) briefly become a powder-skiing paradise. Check out this six-minute Youtube clip to see what we mean. Failing that, head for the slopes under the Big Burn chair in Snowmass, where there’s room enough between the stunted, high-Alpine trees, to let rip.

A great place to be after a fresh snowfall

However, if it’s bump runs or tree-skiing you’re after, you’ll be well satisfied here. Aspen Mountain, in particular, has plenty of both, at single, and double black-diamond level – and often the trees and bumps are mixed in together. The runs off Ridge of Bell and Gentleman’s Ridge are real testers for both your legs and your courage. There are also several super-steep groomed trails here, for high-speed carving.

If you’re feeling confident, and fit, there’s also the extreme terrain at Highland Bowl to try – though you should save it till the end of the trip. Tackle it too early and you’ll give yourself a real fright. Together with the areasunder the Deep Temerity Chair, this ranks amongst the steepest in-bounds, avalanche-controlled skiing in the world, and in the right conditions, it’s superb.

Just don’t attempt the hike up to Highland Bowl before you’re properly acclimatised. It takes 30 minutes, and passes through the 12,000ft barrier. Try it on your first or second day, and you’ll be so oxygen-starved you won’t enjoy the descent. Better to stick to the lift-serviced terrain, and leave the bowl for the end of the trip.

There’s similar terrain to be found off the Cirque Headwall, in Snowmass, while Aspen Mountain, immediately above town, is home to some fantastic tree-and-bump runs, off Ridge of Bell and Gentleman’s Ridge.

All in all, there’s some superb terrain here, but it’s widely dispersed and it comes in fairly short doses: most of the runs will take you no more than a few minutes. Over in the Alps, Chamonix, Val d’Isere, Verbier, St Anton, Monterosa, and several others offer more.

Snowboarders will love it

The only thing we don’t like about Aspen is the lack of wide, high, open bowls for freeriding – and the relatively low snowfall for the Rockies. It’s still now comparable to the best in the Alps. Don’t get us wrong – when it snows, it can be very, very good.

For a ritzy resort, Aspen’s commitment to freestyle is impressive. It currently hosts the X Games, and is home to five terrain parks, two superpipes and one mini-pipe. Buttermilk mountain is the real magnet – home of the X-Games, and some reeeeeeally serious features in the Crazy Terrain Park – allegedly the longest in the world. But you should check out Snowmass too – which has three separate parks of its own. Not all the parks pro-rider standard: at the top of Buttermilk, you’ll find the much easier Ski and Snowboard Schools Park – perfect for trying little itty-bitty jumps.

Four mountains may sound inconvenient, with a lot of hauling skis or snowboards around. Not so. If you want to rent equipment, do so from branches of Four Mountain Sports (+1 970 923 2337). At the end of each day, your equipment is transported free of charge to whichever mountain you plan to ski the following day.

No Responses to “Guide to the Mountain in Aspen”