Where to Eat in Aspen 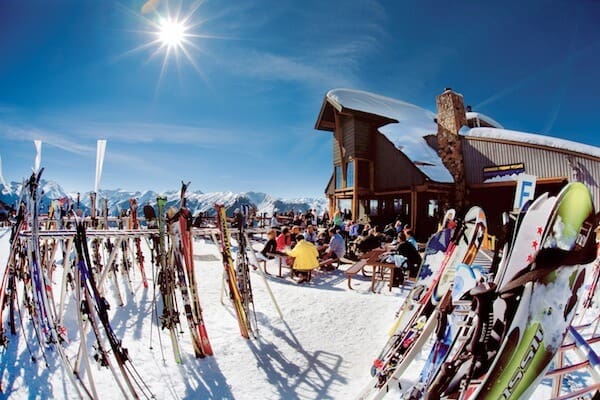 Most restaurants in Aspen are expensive, but if you are prepared to eat at the bar you are served the same food in smaller portions at a greatly reduced price. But wherever you sit, there’s no doubting the quality. In contrast to the lunch scene on the mountain, this is one of the best ski resorts, worldwide, for eating out at night.

From pizzas to sushi

Our favourites include L’Hostaria and Rustique Bistro. Mezzaluna is another good spot, which serves wood-fired pizza and modern Italian cuisine. You also need to save up for some superb sushi, which is flown in daily to the resort from the Californian coast. Kenichi, Takah Sushi, and Matsuhisa, are all recommended.

Little Annie’s Eating House (+1 970 925 1098) is for home cooking, The Wild Fig has a Mediterranean influence, and Jimmy’s is said to be “posh, but not too posh”. Elevation features modern American cuisine. Su Casa is an authentic Mexican eatery, and family favourite Brunelleschi’s (+1 970 544 4644) is where to go for gourmet pizza and pasta. A recent addition is Justice Snow’s, which has eclectic details like an antique copper-top bar and light fixtures made from recycled bicycle parts. Chef Jonathan Lichleiter creates Colorado and Western-influenced cuisine with an emphasis on regional ingredients, and there’s a cocktail list unlike anything Aspen has ever seen.

Two of the eateries with recommended bar menus are Cache Cache for mainly seafood, and Pinons which has everything from tofu enchiladas to sesame-encrusted sea bass. Inside Explore Booksellers is Pyramid bistro which sells ‘farm to table’ healthy food surrounded by books.

Aspen mountain restaurants aren’t a patch on the resort eateries

In town you’ll find food of the very highest quality – and at wallet-weakening prices. In fact, if you want atmosphere, scenery, and quality up on the slopes, there’s only one place to go – Cloud Nine (+1 970 923 8715), one of the two restaurants up at Aspen Highlands. It’s small, cute, and laid back, and the food is serious. Make sure you book first – at least a week in advance to be sure of getting a table (and more over public holidays).

On Snowmass mountain, the star is Gwyn’s High Alpine which specialises in fresh food and innovative recipes based on traditional alpine cuisine. The blackened ahi sashimi-style, garnished with Asian cucumber salad, pickled ginger, soy sauce and wasabi is to die for. The self-service attached isn’t bad either and tosses up some tasty wok dishes. Sam’s Smokehouse (+1 970 923 8686) is a good-value table-service restaurant with spectacular views of Mount Daly. Lynn Britt Cabin (+1 970 923 0479) is a quaint cabin built in the early 1900s with gourmet cooking such as poached lobster with shallot mignonette, arugula and roma tomatoes, or crisp stripe bass with gnocchi, clams, shrimp, crabmeat and mushroom penne. When the lifts stop running, a snow-cat whisks you up there for dinner. The Elk Camp Restaurant replaced the old Cafe Suzanne at the top of the Elk Camp gondola.

Elsewhere, the food isn’t bad, and Aspen lacks the enormous and unpleasant eating-sheds you’ll find in places like Whistler and Vail. But don’t go looking for a restaurant scene here to match the likes of Zermatt in Switzerland – or the kind of off-the-cuff, simple, and excellent huts of the Italian Alps.

Ajax Tavern at the foot of the gondola, is the place to see and be seen, for lunch, apres-ski drinks or dinner. As well as steaks, soups and salads it has a ‘raw bar’ serving oysters, shrimps and lobster. Also in the gondola plaza is Il Mulino, which serves fresh pasta, salads, and a good range of other dishes on a gorgeous sun terrace (with heaters and blankets provided).

No Responses to “Where to Eat in Aspen”