Guide to the Mountain in Keystone 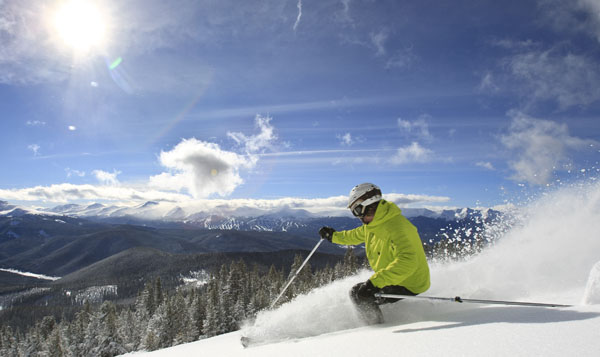 At 3,148 acres, Keystone’s ski area is medium-sized by North American standards – bigger than that of its neighbour, Breckenridge, but smaller than Vail’s and Whistler’s.

By the standards of the biggest Alpine ski areas, however, it’s minute. The Espace Killy in France, which is home to both Val d’Isere and Tignes, boasts 24,000 acres and the Three Valleys is even bigger. Fortunately, Breckenridge is only 30 minutes drive away from Keystone, and Arapahoe Basin is even closer. If you buy the right lift ticket, you can ski in both for free, so day-tripping is always an option.

So: is Keystone’s ski area of only marginal interest? No – provided you’re a beginner or an advanced skier. Here’s why.

It has a top-to-bottom beginner’s run

In most ski resorts, beginners get to wobble about on a small section of nursery slopes at the bottom of the mountain, and only get a sense of skiing its full height once they’ve made significant progress with their technique.

But Keystone has Schoolmarm – a beginner-friendly trail which drops through 700 vertical metres (2300 vertical feet) from the top to the bottom of Dercum, the first of its three “mountains”.  It’s one of the longest beginner trails in North America – or the Alps, for that matter.

There are several easy intermediate trails to progress to after that – and then you can day-trip to ski the long, wide, easy groomers of Peaks 7 and 8 in nearby Breckenridge. All in all, it’s not a bad place to make your first turns on snow.

A51 is a great terrain park

Keystone has only one terrain park – A51 – compared to the five you’ll find in Breckenridge. But all the same, it’s a good’un – with different lines for different abilities, and well-shaped, well-maintained jumps. The ski school also runs classes to help first timers make the transition from skiing to jumping.

The cat-skiing is superb

For snowboarders and advanced skiers Keystone’s best feature is its cat-skiing, in the wide-open bowls and powder fields at the top of the ski area.

Of course, there isn’t always powder up there. In fact, with an average snowfall of around 228ins/5.80m, Keystone is less snowy than most other Colorado resorts. The terrain is perhaps a little tame for genuine experts, too. But after a dump – especially midweek, when most of the locals are at work – you’d be nuts not to head straight for it.

You can either go to Outback bowls gate at the top of Outback, and between 10.30am and 1.30pm pay $5 a time for a shuttle up the mountain, or join a morning with Keystone Adventure Tours which costs around $250 including lunch, a guide, and the chance to ski the best lines in the best snow across all the high bowls. On the right day, it can be an amazing experience (as Welove2ski discovered a few years ago). The runs are fairly short, but you get to ski multiple laps, until your legs are ready to explode. (One caveat: the guides are not instructors, so don’t expect to be taught how to ski powder.)

Bear in mind that there’s also some great bump-skiing and tree skiing on North Peak and the Outback. Welove2ski reader, John Grigg told us recently, “I had the best day of tree skiing I’ve ever had in Keystone a few years ago – absolutely incredible.”

Oh yes, and don’t forget Arapahoe Basin is nearby, with some seriously steep skiing on offer on its celebrated East Wall.

The intermediate-level skiing is good – but limited

Keystone’s groomed trails spread south from the base village over three peaks – Dercum, North Peak and the Outback. They’re not really separate peaks – more like spurs of a single, higher ridge. But they do offer several fast trails which drop straight down the  fall-line of the slope.  Once you get off the north face of Dercum, you’ll find most of them are steeper than the norm in Colorado too. During the week they’re more or less deserted, too.

As a result more confident intermediate-level skiers can have a blast here – for a couple of days. But after that, they’ll find themselves skiing the same runs again and again. If fast skiing on groomed trails/pistes is your thing, then Vail, Aspen or Whistler are better options in North America. Or resorts such as Val d’Isere, Tignes, Meribel, Courchevel and Val Thorens in the Alps.

Finally, don’t forget to have your photograph taken

There’s free photography on offer at the top of Keystone’s key lifts. The photographers scan our lift pass, snap away at you and your ski buddies – and then at the end of the day you’ll find the photos on your online EpicMix account. You can then build them into a online souvenir of your skiing day, which sounds a bit cheesy but is in fact really rather fantastic.

No Responses to “Guide to the Mountain in Keystone”