Guide to the Mountain in La Rosiere 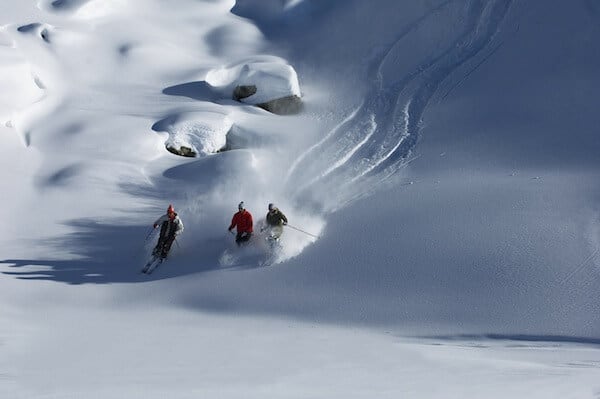 The skiing is on wide, open slopes beneath the ridge that marks the frontier with La Thuile in Italy and is best suited to intermediates (“no lift queues and at times we had pistes all to ourselves” said a reporter). Beginners have nursery slopes in La Rosiere 1850 and there are several green runs close to both the main village and the hamlet of Les Eucherts. Intermediates can clock up mileage on the extensive reds and blues of the Espace San Bernardo ski area.

A good place for beginners

With most of the accommodation spread along the foot of the pistes, easy access to the only green-graded pistes on the French side gets things off to a good start. The ESF has bases in both La Rosiere 1850 and Les Eucherts villages, each of which offers a subtly different experience.

As they progress from their respective greens to reassuringly benign blue runs, those near the main village will encounter gentle drag-lifts and chairs, while over in Les Eucherts it’s straight onto the Eucherts Express detachable chair-lift for a smooth haul further up the mountain. The latter isn’t necessarily a disadvantage, since one of the return runs – Tetras – drops right into the same area used by the main village ski school (and by the time they get there new skiers will have a sense of achievement).

La Rosiere’s reputation as a quality, if undemanding, cruising centre should place it squarely in the sights of intermediate skiers looking for an alternative destination in the Tarentaise. There are in fact more red pistes than blues here, suggesting that there’s more testing terrain if you want it.

In reality the grading can be quite conservative, with some blues feeling like greens in disguise. But in good snow conditions the Fontaine Froide red will take you from just above La Rosiere 1850 down through the tree-line to Escudets (1176m) to continue on the Villard Dessous blue all the way down to Séez – a combined vertical drop of 1020m.

For more meaningful steeps you’ll need to work your way over to the Col de la Traversette, where Traversette and Blaireau fall away satisfyingly through terrain, which also has both boardercross and speed-riding zones. At the top of the chair-lift which serves them lies le Fort, gateway to the wealth of great intermediate skiing over in the La Thuile sector. To us this is the deal-breaker – it’s a different world over there, with better snow quality and some incredible scenery, which you’ll have plenty of time to take in on the long and unavoidable Bellecombe 1 drag-lift.

Apart from a few blues and a couple of greens, virtually all of the groomed terrain is graded red, sometimes more a reflection of length than technicality. Making the point are the Pontelles/Nouva run from just below Le Bélvèdere (2641m) over to La Thuile (1441m) and its northern counterpart, the epic San Bernardo. Either way, the final drop through the tree-line is something you won’t forget.

Look for steeps in the forest

Espace Bernado has 13 blacks, most of which lie, predictably, within the Italian sector. Below the Col du Petit Saint-Bernard both Touriasse and Bélvèdere are worthwhile, although you won’t be heading off into any new surroundings not shared by those on the nearby reds. A more fruitful hunting-ground for fans of steeps is the forested area below Les Suches (2200m), where a choice of blacks drop into La Thuile.

We enjoyed Muret, which feeds at the half-way point onto the red-graded Nouva for a cruise through the trees, although next time we’ll take Diretta, for its longer black experience. While confident intermediates can tackle the return runs into La Thuile, it has to be said that this is not the domain of less-experienced skiers, who will need to take the ‘cable-car’ (more gondola, actually) down.

Heli-skiing across the border

With so much south-facing terrain, snow quality is a key factor in the off-piste experience above La Rosiere. In good conditions the drop from Mont Valaisan (2891m) to the base of the Petit Bois chair-lift can be extended down to the hamlet of Le Mousselard, in whose restaurant (La Chaumière) you might persuade someone to give you a ride back to La Rosiere.

If not, you’re relatively close to the departure point for the heli-skiing operations which drop skiers with deep pockets across the border, where this kind of activity is still permitted. Popular drop-points include Le Ruitor, for a cross-border run (with 2100m vertical) over to Le Miroir, between La Rosiere and Sainte Foy, or north to Monte Miravidi. Flights also leave from the Italian side of Col du Petit Saint Bernard, with drops at Freduaz and Mont Ouille, in addition to Ruitor and Miravidi. ESF and Evolution 2 both offer heli-skiing here.

The 500m-long terrain park is reached by the Poletta drag, which comes complete with fun box, rails, jumps and tabletops. The teleseige du Fort offers a great snowboard and skicross course and, if you’re feeling up to it, the Freeride Zittieux snowcross off-piste area is reserved for experts.

No Responses to “Guide to the Mountain in La Rosiere”