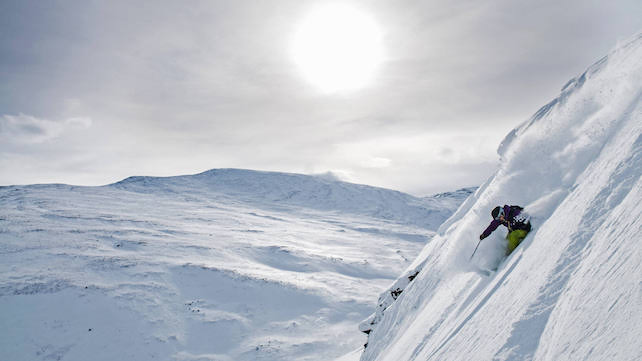 So far we have looked at Italian resorts, Swiss resorts, Austrian resorts and French resorts – all of which have reliable snow until late in the season. Now it’s the turn of Scandinavia…the last in our series.

Because these resorts are so far north – some are even in the Arctic Circle – they have an entirely different snow pattern from the Alps. Here – in no particular order – are seven resorts with a ski season that finishes at the end of April or later.

On a good day, no other ski resort in Sweden can match the off-piste in Riksgransen. There’s also a 21km of pistes including Nordalsfjäll where the Scandinavian Big Mountain Championships are held in May each year. There is superb heli-skiing here, too, in sunshine – at midnight! – in the last weeks of the season.
Stay: Meteorologen Ski Lodge in the old customs building.
Lifts close: end of May. 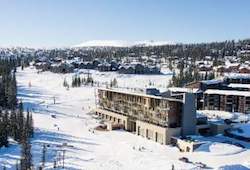 The family-friendly resort is also Norway’s largest ski destination. Trysil has four interconnected ski areas, with slopes ranging from black runs in Høgegga to red, blue and green slopes at Skihytta, Trysil Turistsenter and Trysil Høyfjellssenter. There is a large children’s area on both sides of the mountain and the area has 29 lifts and 75km of piste in all.
Stay: four-star Radisson Blu Resort.
Lifts close: mid April.

Levi has developed enormously in recent years, and now has an impressive range of accommodation and a wide choice of bars and restaurants.

The ski area, with its 37.9km of piste including a World Cup run, is regarded as the most extensive and snow-sure in Finland. There’s also night-skiing. Aside from skiing there’s the chance to go on husky, reindeer and snowmobile safaris.
Stay: Crazy Reindeer Hotel with Inghams.
Lifts close: beginning of May. 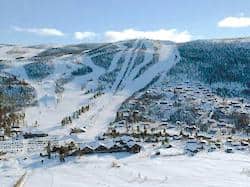 With 17 lifts, 35km of piste, and a vertical drop of only 378m, Geilo is best suited to beginners, low intermediates and families. 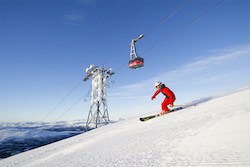 Are is the best resort in Scandinavia and is truly world class, with 42 lifts and 100km of slopes, along with spectacular off-piste runs. Its lakeside setting is dramatically beautiful, nightlife sizzles and it has some good restaurants.
Stay: Hotel Holiday Club with Ski Weekends.
Lifts Close: mid-April, though some lifts remain open until May 1.

The resort of Hemsedal has 44km of slopes including a large beginners’ area, lots of varied intermediate runs and some off-piste tree skiing. The pistes are beautifully groomed, and remain quiet on weekdays. Photo: © Hemsedal Tourism/F.Tolpinrud.
Stay: Molla Cabins.
Lifts close: beginning of May.

Not a resort as such, but you can go ski-touring from Lyngen Lodge until June with local qualified UIAGM mountain guides – travelling by private boat followed by snowmobiles to access the best of the mountains. More than 60 summits of over 1000m flank the Lyngen Fjord’s shores, so you’ll have a fabulous choice of terrain and ascents on skins ranging from 600m to 1500m.
Stay: Lyngen Lodge with Scott Dunn. Lifts close: June.

No Responses to “The Best Scandinavian Resorts for Easter Skiing”