6 Reasons Why We Love to Ski the Nordkette 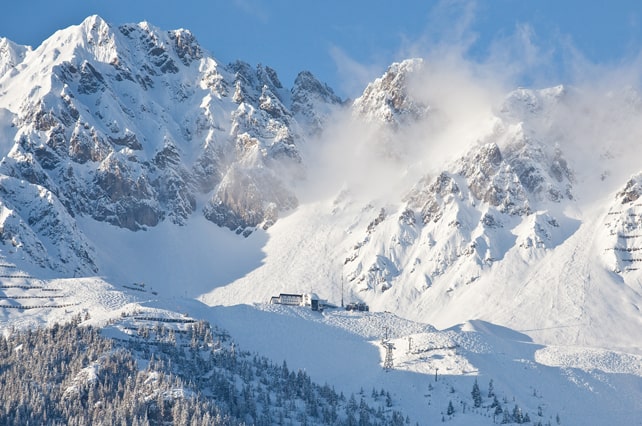 I’ve heard about the Nordkette a hundred times. “It’s right next to Innsbruck!” they tell you. “You catch the mountain railway from the middle of town!” they add. “It’s really cool!”

And each time, I’ve recoiled a bit from their enthusiasm and thought, yeah, yeah. It’s a ski area next to a city. So what? The slopes are probably flat and boring. Most likely, it doesn’t get much snow. I’ve flown into Innsbruck many times in the last 20 years, and I’ve never gone anywhere near it.

Now finally, I have. And – guess what? – I was wrong. The Nordkette is one of the coolest pocket-sized mountains I’ve ever skied. Cooler than a Russian eating ice cream on a winter’s day in St Petersburg. Cooler than the inside of an Inuit’s freezer cabinet. Cooler even than the angle of Ted Ligety’s skis when he makes a giant slalom turn. Well all right, maybe not as cool as Ligety’s edge angles. But as I write this, 48 hours after my visit, I’m still buzzing from the experience.

The top cable car may rise to only 2,300m, which is modest by Alpine standards. But all the same, the Nordkette packs a mighty punch, tumbling down from its peak in a slope so steep it feels every wipeout will end with you lying on your back in the Maria Theresien Strasse, down in Innsbruck. Most of the terrain here is off-piste; but the ski patrollers protect two of the top chutes (and the slopes below them) against avalanches by blasting after a dump. So you can ski powder, through turn after joyous turn, without stressing about the stability of the snowpack. With the city spread out below you, and the central spine of the Alps beyond, the view is mind-blowing too.

Are there any pistes? Not many: and because of the the steepness even the reds zig-zag down the slope like a beginner’s cat-track in any normal resort. If it’s groomed snow you want, then it’s best to ski the Patscherkofel, on the other side of town, or jump in the car to Stubai glacier.

2. It has its own snowy microclimate 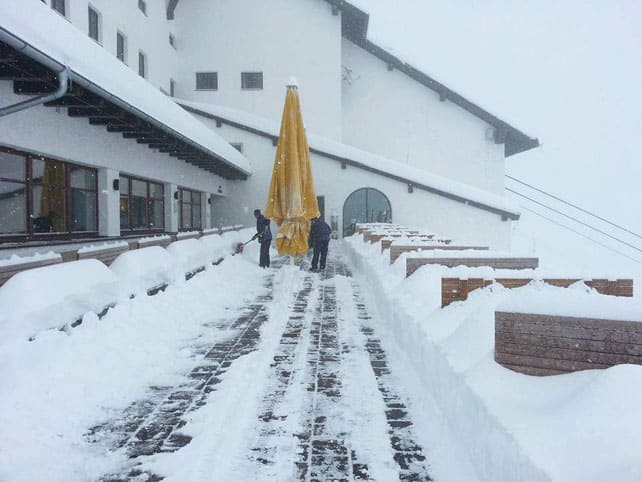 The Nordkette is famous in Innsbruck for its snow. Often, storms come in from the north or northwest, and seem to get stuck there, dumping nearly all their cargo before moving on. The Patscherkofel, on the other side of town, is often short-changed as a result. It was certainly like that on the day I skied there. Most of the mountains around the city had had only a dusting of fresh snow, and most of that had been blasted away by the wind. But on the Nordkette we found 20-30cm of the lightest, driest powder. In a word: bliss.

(One caveat about the snow on the Nordkette. The mountain faces south, and gets a lot of sunshine, so you need to ski it as soon as the lifts open on a powder day, in all but the coldest weather.)

3. The snow park is run by Vikings 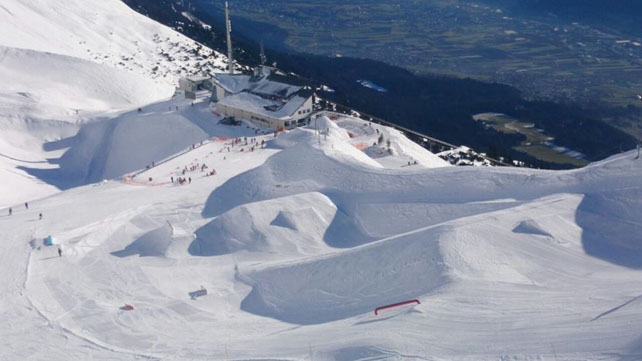 The Nordkette is home to a small but highly-rated terrain park, known as the Skylinepark. It’s shaped by Bjarni Thor Valdimarsson and his colleague Arnar Stefánsson. Both are from Iceland, and they seem totally unflappable, whether they’re snowboarding through powder, or shaping the popular medium kicker line next to the two-seater Frau-Hitt-Warte chairlift. Has that got anything to do with the fact they’re clearly descended from Vikings? I think so… 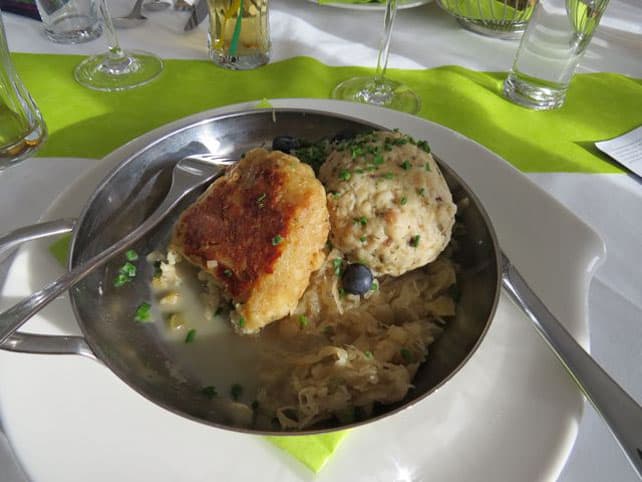 This was my lunch at the table-service Alpenlounge Seegrube restaurant, which sits at the mid-point of Nordkette’s ski area. I had duet of two dumplings with sauerkraut; one fluffy and made with bacon, the other cheesy, slightly gooey and so moreish you could probably eat a football-sized version before you realised that your stomach was about to explode. The cost is €7.90. Three years ago, in La Plagne, I bought a plate of unadorned chips at “un self” for almost the same money: €7. I know which I’d rather eat.

5. They hold Friday-night discos in an igloo 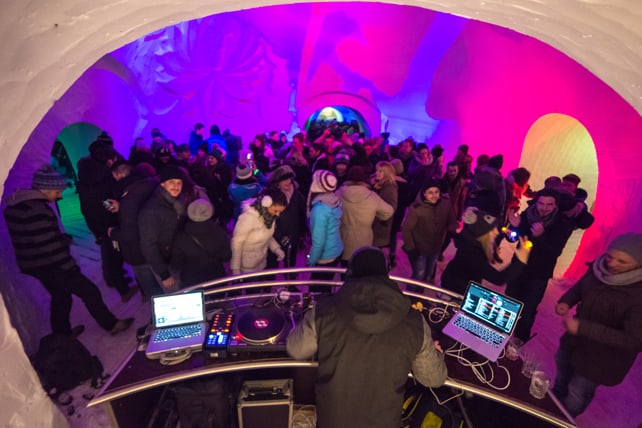 A disco in an igloo. On a mountain. Overlooking a city. How many of those have you ever been to?

6. The world’s coolest mountain railway will take you there

To get to the Nordkette, you jump on a funicular railway designed by Zaha Hadid (she did the aquatics centre for the London Olympics). It’s modern, slick, and snazzy, and connects with the first of two cable cars that whisk you to the summit. But what’s really, really cool about it is the feeling you get when you come back down again, after a morning trashing powder beneath the mountain’s towering crags. There you are, with your skis slung over your shoulder, and the snow still melting on the buckles of your boots, suddenly walking next to the Kaiserliche Hofburg of the Hapsburgs. It’s like you’ve just been teleported from Planet Adrenaline back into the middle of the 18th century.

So who should ski there?

Freeriders and freestylers, obviously, though anyone who wants the weird and wonderful experience of skiing a mountain so close to a city, should check it out. Bear in mind, however, that it’s small, compared to the big interlinked areas such as the Skiwelt or the Three Valleys, and unless you luck into a succession of snowstorms you’ll be done with it after a couple of days. So treat it as a target during a weekend break in Innsbruck, or hire a car and get ready to explore the many other ski areas dotted around the city such as Kuhtai and the Stubai glacier. For more information on the city, check out innsbruck.info, and tyrol.com. Airlines serving the city from the UK include easyjet, British Airways and Monarch. 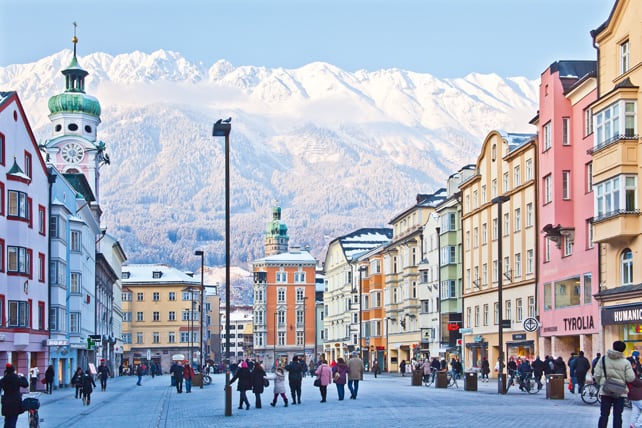