Top Ten Tips For Skiing BC

With 10 mountain ranges and 13 top-class ski resorts, British Columbia in Canada attracts a huge number of visitors each winter. Here are 10 reasons why the province should be on your bucket list.

1. Ski and Surf the Same Day 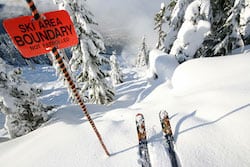 There aren’t many places in North America where you can ski on a mountain while drinking in the gorgeous views of the ocean – fewer still where you can ski in the morning and surf in the afternoon. On Vancouver Island you can do just that. Start by riding up the mountain to make first tracks, then travel on to Tofino to surf Chesterman Beach or Long Beach. Mount Washington Alpine Resort‘s ski-to-surf packages offer two nights at the resort and another two at Tofino’s Middle Beach Lodge. Photo: Vancouver Island Tourism. 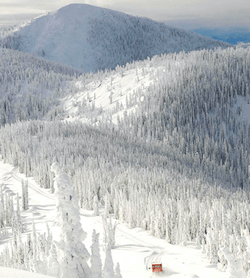 It’s a few quick turns from the top of the Grey Mountain chair-lift at RED Mountain Resort to the Mt. Kirkup Cat Skiing pickup spot. You then travel deep into the wilderness by means of a snow-cat.

If you haven’t been cat-skiing before: it’s a bit like heli-skiing but much cheaper. You ski behind a guide on terrain that can vary between wide open slopes and tree-skiing on steep terrain — and drift through the untracked powder. In this case you’ll end up back at the lifts. The cat operates from 10am–2pm daily (conditions permitting). 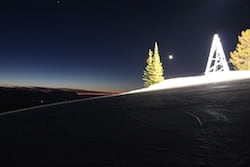 If you fancy the idea of skiing in the moonlight, then visit BC’s Purcell Mountains. Ride up Kimberley‘s North Star Express and ski down the longest night-skiing run on the continent, a meandering 2.5km. The resorts of Silver Star, Panorama, Big White, and Mount Washington all offer their own night skiing, too.

This one isn’t a secret, but no list of the world’s top ski resorts – let alone BC’s best resorts – can possibly omit Whistler. A short, scenic 125km drive from Vancouver, the resort spans two mountains that are connected by the PEAK 2 PEAK Gondola. Whistler was recently purchased by Vail Resorts and has 200 marked runs, 16 alpine bowls, and three glaciers. The cosmopolitan resort has good apres and lots of other non-skiing activities, too. Photo: Whistler.com


5. Discover The Birthplace of Heli-Skiing 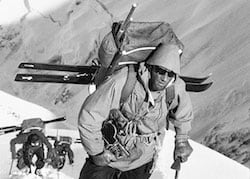 Over 50 years ago, Hans Gmoser – climber, mountain guide, and backcountry skier – took a few skiers into the Bugaboo Mountains by helicopter. Soon after, the first commercial heli-ski operation in the world was up and running. Today BC is home to dozens of heli-ski operations, with terrain that stretches from Northern BC, to the rugged Coast Mountains, and into the Canadian Rockies. 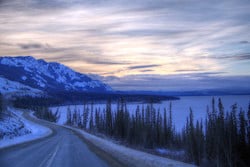 The ultimate ski road trip takes place in BC’s south-eastern corner. The loop winds through the Kootenay Mountains and on to the heart of the Purcell and Monashee mountains.

There are eight alpine ski resorts, two dozen cat-ski and heli-ski operations, and a wide choice of backcountry lodges to stay in. Ski them all, or choose just a few on BC’s Powder Highway. Photo: Hellobc.com

7. Ski at Three Resorts Above Vancouver

There are not many places where you can you ski whilst gazing down onto a city? Certainly not on three different mountains overlooking the same city. But by travelling under half an hour from downtown Vancouver, you can ski at Cypress Mountain, Grouse Mountain, or Seymour Mountain.

It’s quite an experience sliding down – especially on the groomed night-skiing runs with the city lights twinkling below you. View from Seymour Mountain. Photo: Great Vancouver Hotels. 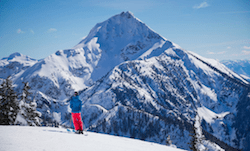 Revelstoke offers the continent’s longest lift-serviced vertical of 1712m. The village is only 512m above sea level, which means you shouldn’t become dehydrated or breathless whilst swishing through the 9 to 13 metres of powder the resort receives on average each winter. The Last Spike is a 15.2km green run that winds its way down to the village base. Photo: Revelstoke Mountain Resort.

9. Ski Past Snow Ghosts and Climb an Ice Tower 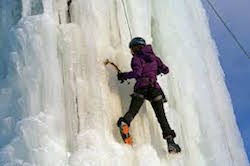 Snow ghosts and a frozen ice tower sound a bit like the backdrop of a Disney movie, don’t they? But that’s actually what you’ll see at Big White, for the ice- and snow-covered pine trees look just like eerie beings. If you have any energy left after your skiing day then head to Happy Valley Adventure Park and try the 60m Ice Climbing Tower.

10. Drink at The Highest Restaurant in North America 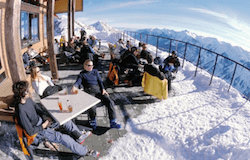 Sip a cold beer in a cosy mountain lodge at 2346m. The views from Eagle’s Eye Restaurant at Kicking Horse are some of the best in BC. A meal, or just an apres-ski drink, at the highest restaurant in North America is not to be missed. You can even stay the night in the Eagle’s Eye Suites, making first tracks from your own private mountain-top retreat the next morning.

No Responses to “Top Ten Tips For Skiing BC”