6 Reasons Why Intermediate Skiers Will Love the Stubai Glacier 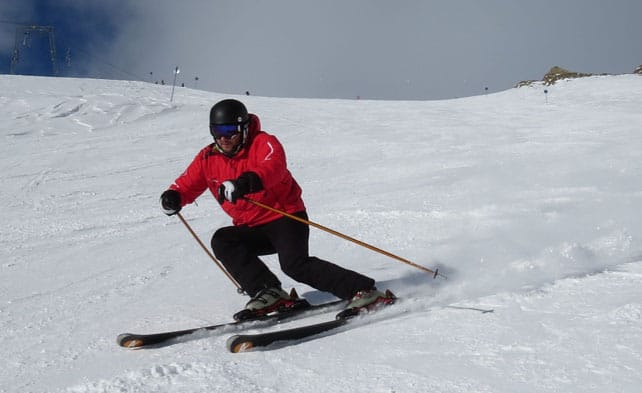 Last winter I skied the Stubai glacier for the first time in…ages. Hell, I can’t even remember when that earlier visit was, and since then maybe a hundred other ski areas have passed beneath my edges.

But in many ways that’s what made the 2015 trip so memorable. Because even after all those other slopes, I was still blown away by the quality of the piste skiing I experienced up there, in the shadow of the 3,333m Schaufelspitze, south of Innsbruck.

Of course, it helped that I was in good company. Bavarian-turned-Innsbrucker Raphael Gronauer was my guide, and we both brought fresh legs and high spirits to the job of exploring the lift system. The conditions – sunshine and fresh snow – helped too. Raphael skied like a rocket for four hours, and I had an absolute ball following in his wake. In terms of pure carving it was, without doubt, my best day of winter 2014-15 (although, overall, the days I was skiing off-piste on the Nordkette and in Breckenridge were even better).

What really struck me as we made our turns is how underrated the Stubai glacier is amongst English-speaking skiers. No, it’s no match in terms of size compared with the likes of the Three Valleys, the Espace Killy, or the Skiwelt. But for the sheer pleasure it can give a group of piste-loving intermediate skiers, or indeed anyone who – like we did – fancies getting up on their edges and feeling the shape of the skis drag them across the snow, then it’s hard to beat. 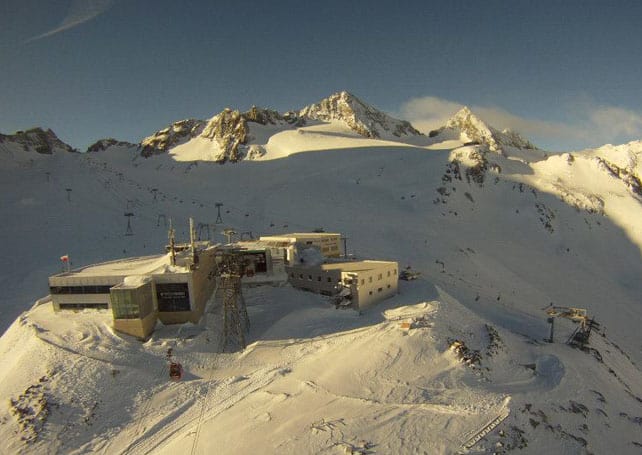 The top piste on the Stubai starts at 3,210m, and most of the skiing is above 2,600m. Only one piste drops below the 2,300 mark. Most of the slopes face north, too. So as well as plenty of stupendous high-mountain scenery, you get top-quality snow.

That matters in the middle of winter, just as much as in the spring, early summer and autumn (when the Stubai is also open for skiing). You can never be sure what an Alpine winter is going to serve up, weather-wise, and my visit, in mid-January, was a case in point. Parts of the Alps had just experienced the warmest January day on record, and after patchy snowfall in December, the lower resorts were in a bit of mess.

Not the Stubai. Up there, we skied deep, soft and squeaky cover from start to finish – with the exception of the valley run which drops down to the bottom lift at 1750m.

As anyone who’s skied for more than a couple of weeks will know, it’s the condition of the snow that creates difficulty as much as the steepness of the slopes, and on this day, everything was easy. It was as if we were skiing on rails.

Okay, so maybe not a mile wide. But it certainly felt that way. Everyone likes a bit of elbow room when they ski, and on the higher pistes especially you could have had more elbows than Shelob the spider, and still not got into trouble.

3. And mid-week, in mid-winter, they’re all but empty 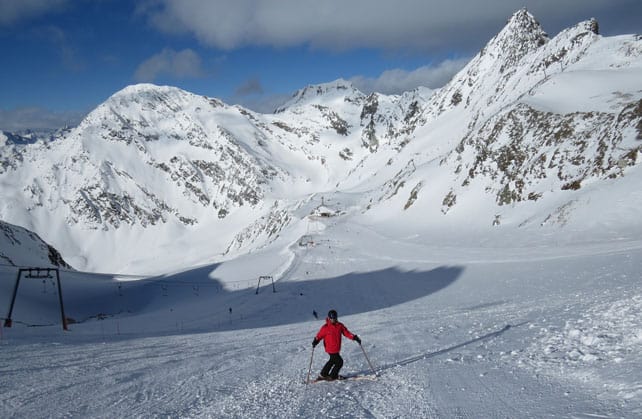 In the middle of a ropey January you’d have expected the Stubai’s pistes to be heaving, as everyone migrated uphill in search of good snow. But they were all but empty. This of course added to the intoxicating sense of freedom we felt – especially when we made big, carving turns across the pistes. I was still glancing uphill, over my shoulder, to make sure I wasn’t going to hit anyone straight-lining down the slope. But I hardly ever had to alter my course to take account of another skier. 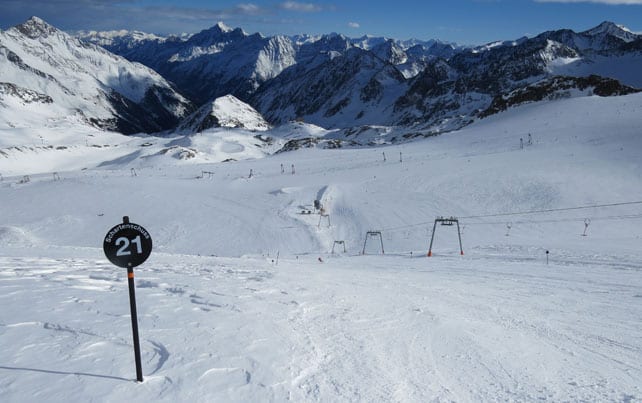 Okay, so we’re talking about a glacier ski area. All the pistes are above the treeline, and the off-piste terrain is limited because there’s always a worry someone will disappear down a crevasse. Nevertheless, I was impressed by the variety of the piste-skiing on offer. Up top, on the glacier itself, the runs are steady, gentle and follow the fall-line straight downhill.

Lower down, they’re more sinuous, and thread their way round all kinds of bumps and wobbles in the terrain. There are even a couple of blacks: although in almost every other resort they’d only qualify as reds.

The pistes are pretty long, too. On the north-facing side of the ski area, they drop through 900 vertical metres. 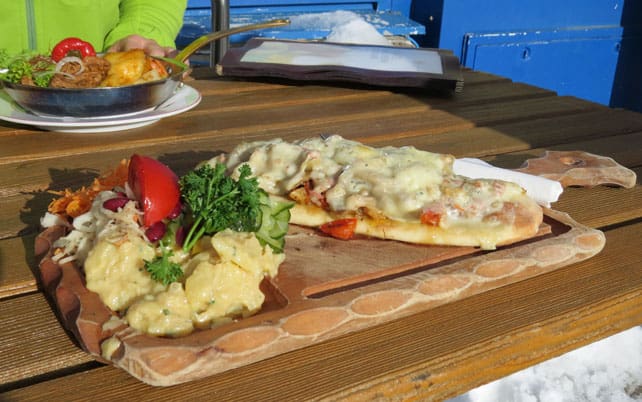 This plate of Bauerntoast cost €9.70 – mushrooms, peppers, onions, cheese and bacon piled high on a pizza-like base and served with a potato salad. There was so much, I couldn’t finish it – a rare occurrence indeed when a monster mouth like me stops for lunch.

6. And there’s bad-weather back-up not far away

On a sunny day like ours, skiing above the treeline is sheer joy. But whenever the clouds come down, or the snow falls, it’s distinctly less brilliant. The whole world turns a milky white, and you’re more or less skiing by sense of sense of smell – as you can see from this webcam shot of the Stubai, taken on March 26, 2015.

Not a lot to see: the Stubai in heavy snow. Photo: stubaier-gletscher.com

So it’s good to know there’s a ski area lower down the valley which does have some tree-lined pistes, at Schlick 2000. It’s one of nine ski areas around Innsbruck that’s covered by the OlympiaWorld ski pass. Others include Kuhtai and the Nordkette.

So, what’s the best way to have a holiday there?

Fancy a crack at the Stubai? Then you need to bear two things in mind.

First is the Stubai’s modest size. Most intermediates will have seen enough by the end day three.

Second, it’s not a ski resort in the conventional sense. There’s only one hotel at the bottom of the lifts – the Alpensport – and it gets very quiet once everyone’s driven home at the end of the day. If you’re looking for any kind of atmosphere, you need to head down the valley.

One option is to stay in the pretty village of Neustift, close to the lifts at Schlick 2000 – provided you get off the main road and book one of the hotels or apartments near the church. You pay a premium for accommodation there, but you also avoid the traffic up and down the Stubaital. This is the best option if you’re only going to be in the area for a couple of days.

The other option is keep going, down to Innsbruck itself. For more energetic skiers, or for a longer break, this is a brilliant option, because – armed with a hire car and an OlympiaWorld ski pass – you can then day-trip to whichever ski area suits the conditions, the weather, and your fitness, best.

For more information on the Innsbruck and its surrounding ski areas, check out innsbruck.info, and tyrol.com. Airlines serving the city from the UK include easyjet, British Airways and Monarch. 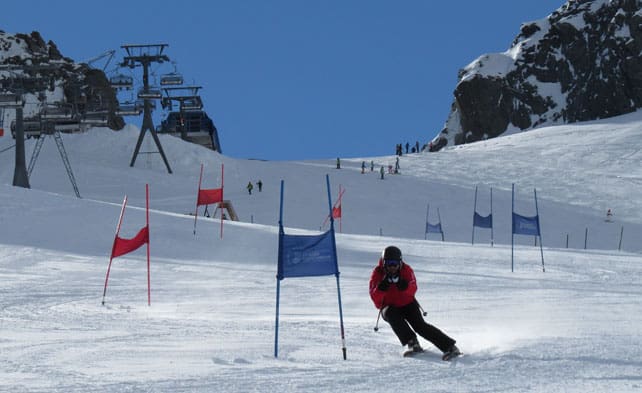