Where Should I Go Cross-Country Skiing?

For many downhill skiers, the rather forlorn sight of a cross-country skier doing laps in a field close to the bottom of some ski lifts will prompt them to ask: “Where’s the fun in that?”

Where indeed? The pleasure of cross-country skiing comes from choosing your location carefully. You want to be able to ski straight across lakes into the wilderness – or ski from village to village – and be astounded by ever-changing views, rather than being stuck in some track that is an adjunct to an Alpine resort. And, be warned, almost all downhill resorts claim to offer cross-country skiing, though their claims are far from equal.

Specialist tour operators such as Headwater and Inntravel offer packages away from the madding crowd.

A sure bet are the Nordic countries, which are so far north as to have snow at low levels until the end of April. And with hundreds of kilometres of tracks through forests and over summits, you can only hope to scratch the surface of what’s there. However, if you prefer the Alpine countries, perhaps because you like the food or because you find the alcohol prohibitively expensive in Scandinavia, there are places here too where you can enjoy a superb holiday.

Below you’ll find a list of some of the best places to go, and what to watch out for, country-by-country.

Norway rightly holds the reputation as one of the top cross-country destinations as, put simply, it has it all. In the popular Gudbrandsdalen valley, home to the resorts of Venabu, Sjusjoen and Rondablikk, you can ski to the edge of the spectacular canyon which cuts through this high-altitude plateau and command magnificent views over the jagged peaks of the Rondane mountain range. Those looking to tie their holidays in with downhill skiers can try any of the major resorts. At a resort such as Beitostølen, the lift operators will regularly slow down the chair-lifts so cross-country skiers can catch a lift up to the plateau and share the mountain with their downhill friends.

Sweden’s mountains are less spiky and dramatic than those in Norway – from the air they look a bit like molten ice-cream, or flopped meringues. But once you get used to their particular beauty you will find them perfect for high plateau skiing. As in Norway, big downhill resorts such as Are or Tanndalen also offer large networks of trails. You might want to consider hiring a log cabin to stay in.

Here the mountains have given way to rounded fells. These are less dramatic than their Nordic neighbours but you are also in the land of the thousand lakes (actually closer to 188,000), criss-crossed by trails, which gives you wide open views when you leave the sheltered forest trails. Any apprehension about falling through the ice is quickly dispelled when you see skidoos or lorries also crossing the ice. Sadly in both Sweden and Finland noisy skidoos are commonplace, but Finland does have the advantage that many mainstream operators offer holidays in such places as Levi, Yllas, Ruka and Saariselka at modest prices. 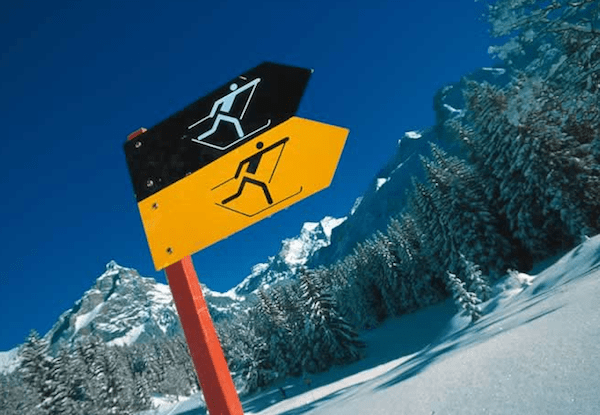 As soon as you move to the Alpine nations, distinct differences emerge. The season is much shorter, often finishing in mid-March. The trails are on the valley floor – often several thousand metres lower than the peaks. Also, rather than the wilderness feel of the Nordic countries, you have village-to-village skiing, between towering Alpine peaks either side of you. A particular advantage of Switzerland is the ever-reliable train service, which you can use to find new locations or catch a lift back if you are feeling tired. Popular destinations are the Goms Valley, the Bernese Oberland and Davos.

Much like Switzerland, Austria offers village-to-village skiing in places such as Leutasch, Seefeld (which has recently opened a biathlon centre, available to all) and Trins. Even if you’re only planning to ski a few kilometres a day, you may appreciate staying in one of the spa hotels at which Austria excels, to rest your aching limbs. You’ll soon discover muscles you were previously unaware of, such as the ones on the front and inside of your thighs, rather than the ones on the outside of your thighs that control your downhill skiing.

Italy has recently been rated as one of the most affordable Alpine nations and it too offers cross-country skiing. Particular favourites are South Tyrol, the German-speaking autonomous province, which for a long time has led the way in snow-making on downhill pistes. Dobbiaco (or Toblach in German) is also one of the only resorts to have snow-making cannons for their cross country trails. The Trentino region is another excellent place for cross-country skiing, with 11 different centres for the sport. Val di Fiemme was the location of the World Championships in 1991 and 2003, and Lago di Tesero will host the World Championships again in 2013.

Although an Alpine nation, most cross-country skiers in France steer well clear of the Alps. Many of the trails in the big resorts are really little more than exercise grounds where locals go for their workout, much like office workers who go for a jog on busy roadsides at lunchtime. However, France has other mountain ranges. The Massif Central and the Jura mountains are both popular places to ski, offering a very traditional setting. 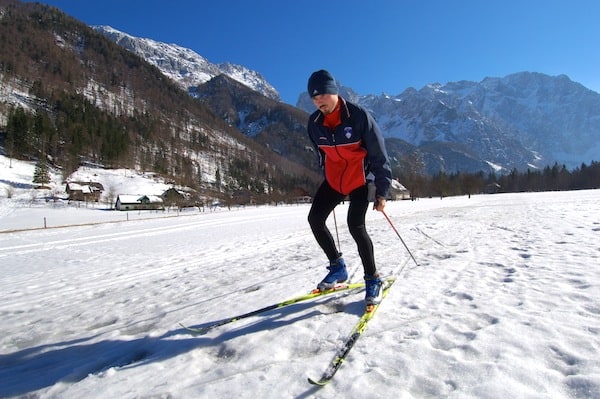 The resort of Kranjska Gora offers a good network of trails stretching into Italy and Austria, but if you hire a car you can also stay in the beautiful lakeside town of Bled. This lets you access the beautiful valley of Bohinj, with its orchards nestled in the Julian Alps, and Pokljuka not far away. Whenever hiring a car for cross-country skiing, make sure it has an arm rest-cum-hole in the back seat which allows you to slide the skis right through to the gear stick. Cross-country skis are typically six-feet long and are unlikely to fit in the boot otherwise.

One place you won’t find in the ski brochures is Germany. The town of Garmisch-Partenkirchen has a quaint railway running alongside the cross-country tracks, and is perfect for those seeking a city break-cum-skiing holiday. There’s beautiful architecture and lots of history – you can still see the Art Deco stadiums and ski jumps from Hitler’s 1936 Olympics, and Munich is in easy reach.

The French-speaking Canadian Province of Quebec hosts two major cross-country skiing competitions – both open to all comers. The Gatineau Loppet, is in a beautiful park just outside Ottawa, and the Canadian Ski Marathon runs from Ottawa to Montreal. One of the most remarkable cross-country adventures to be had is in fortified Quebec City, on the five-mile track on the Plains of Abraham. Hire your skis at the Pavillon de la Decouverte, give way to horse-drawn sleds of tourists and double back around the Martello towers and through the woods along the top of the cliffs dropping into the fast-flowing ice floes which are racing you in the St Lawrence river below.

Colin Nicholson is editor of Ski & Board magazine having been a ski correspondent for publications like The Independent and Metro in the past. He started skiing aged two in Moscow's Lenin Hills at the height of the Cold War. Whilst he loves it, he regularly takes a break from Alpine skiing to revisit his first experiences of the snow by donning cross-country skis.

9 Responses to “Where Should I Go Cross-Country Skiing?”