Why the Altitude Comedy Festival is Fast Becoming a Classic 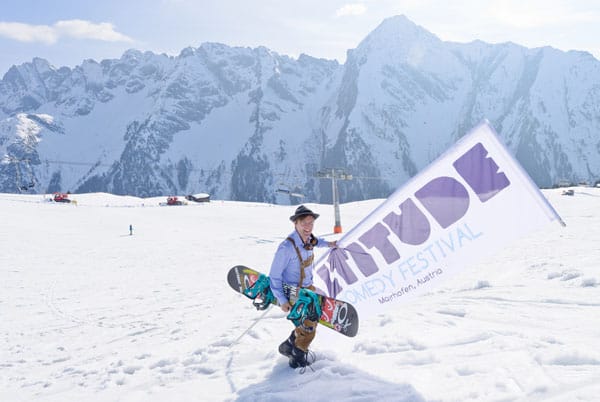 Comedian Andrew Maxwell gets into the mood for the Altitude. Photo: © Altitude Comedy Festival

Well knock me down with a deftly-aimed ski pole. Have you seen who’s headlining this year’s Altitude Comedy Festival? Eddie Izzard. For several weeks the organisers have been promising to pull a rather large rabbit out of their comedy hat – and boy, have they delivered.

It’s the latest coup in an amazing two years for the festival. The Altitude started life in Meribel back in 2007, and after a faltering start moved to Mayrhofen, in the Zillertal in 2012. In the process it has suddenly morphed into a must-see event for stand-up fans: especially those who like to mix their comedy with stunning mountain views.

Altitude Comedy Festival’s switch to Austria in 2012 was accompanied by the announcement of the most eye-catching line-up you could ever hope to clap eyes on: Frankie Boyle, Tim Minchin, Milton Jones, Terry Alderton, Andi Osho, Marcus Brigstocke…the list was a long one, and more often than not four or five of them would appear on the same stage on the same night.

I was in Mayrhofen for the 2012 festival and the Tuesday night gala show was an extraordinary event. Alderton, Brigstocke, Jones and Minchin all shared the stage that evening, and delivered a turbo-charged Comedy Roadshow with more jokes, bigger laughs, and a warmer atmosphere than ever the BBC could  manage. When Minchin shuffled on, with his nervous eyes and razor-sharp satire, to close the show, the night reached a kind of critical mass of laughter and wonder. It was one of those moments when everybody gets a bit giddy and euphoric.

And now the organisers have matched that achievement by booking not just Eddie Izzard, but John Bishop, too. Also on the bill are the magnificent Terry Alderton, Marcus Brigstocke, Andrew Maxwell, Phill Jupitus, Daniel Sloss and Phil Nichol. It’s a mouthwatering prospect.

Oh, and while we’re at it – this Eddie Izzard in New York on the joys of software downloads…

It’s not just the line-up that makes the Altitude special: it’s the fact that you’re seeing these comics in intimate venues. The “big” gala nights are in the Mayrhofen’s conference centre – the Europahaus – which seats just 700 people. Several of these guys can fill the O2 in London. And there you are, watching them sharing a bill with other comics, in a place that’s no bigger than a school gym. You can’t believe your luck.

Then when you stumble out of the Europahaus at the end of the night you suddenly remember – “I’m in Mayrhofen, in the middle of one of the most beautiful mountain ranges on earth!” At this time in March, the resort has a unzipped, end-of-season atmosphere. The peak-week crowds have dropped off, everyone’s relaxed: and before you know it you’re standing in the same bar as the cream of Britain’s comedy talent.

Now for the bad news. The festival runs from March 18-22. So you’ve got to get your act together right now if you want to make it this year. But if you’re a big fan of stand-up, don’t let that put you off. Feign sickness for a few days. Cancel all appointments. Drive all the way to Austria if you have to. This is an extraordinary event: its intimate scale out of all proportion to the size of the stars on show. It feels like you’ve been invited backstage for an entire week. 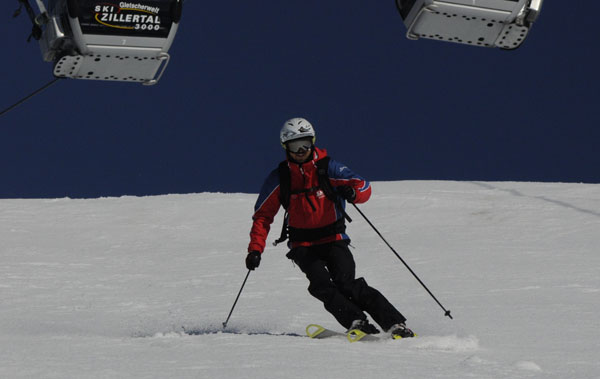 And if you fancy skiing (or snowboarding) as well, then so much the better. Admittedly, there are more reliable places to go spring skiing than Mayrhofen. The slopes immediately above town top out at 2500m, and many of them get a lot of sun: so if there’s a thaw, the pistes will be pretty sloppy by lunchtime. Still, you can always day-trip along the valley to the Hintertux glacier, where soft, grippy snow is guaranteed. And if the weather is colder and snowier, then you’ll be in skiing heaven: thanks to the extraordinary range of slopes on offer in the Zillertal. First-timers will like it too – the nursery slopes above Mayrhofen are among the best I’ve seen.

Just remember. If you crash into a snowboarder, be nice. It might be Marcus Brigstocke.

Sean Newsom visited the Altitude Comedy Festival as a guest of Inghams. If you can’t find a package holiday to Mayrhofen to suit you, then bear in mind that www.altitudefestival.com offers tickets-and-accommodation packages. You should also check out the “Where to Stay” section of our Mayrhofen resort report for accommodation advice. Bear in mind that there are lots of villages along the Zillertal where you can stay which are often cheaper than Mayrhofen itself and only a few minutes’ drive from the resort. The nearest airport is Innsbruck, served by Monarch, easyJet and British Airways.