Hotel On High In The Sella Ronda 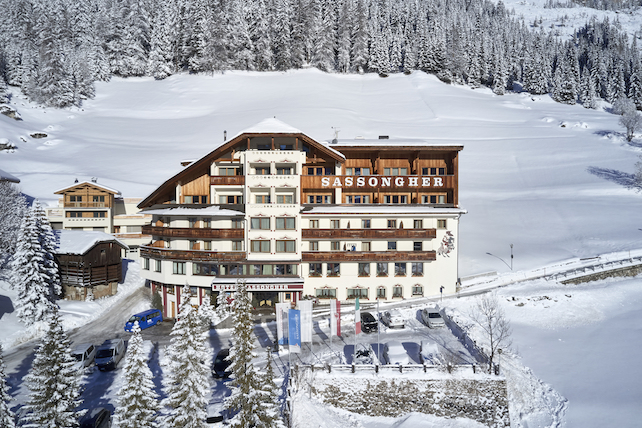 We recently interviewed Francesco Morini, owner of Hotel Sassongher in Corvara. The resort is part of the Sella Ronda with 20 lifts and 25km of slopes. In turn this is part of the whole Superski Dolomiti with 53 lifts and 130km of piste locally (an it’s part of a wider 500km network of interlinked lifts and pistes).

We’re taking a bit of time out to chill after a truly magnificent dinner washed down with some spectacular wines from this region in the main restaurant of Hotel Sassongher. We’re pretty sure this is the only hotel we’ve ever stayed in where you get ingredients such as seafood, including whole lobsters and langoustine, shrimps and game on the half board menu.

The Sassongher sits on a rise, dominating the village just under the mountain of the same name. It’s a family-run hotel, traditional but with a contemporary twist as well. Francesco, the owner, seems always to be on duty at every hour of the day and night. He’s at the front of house or in the bar, greeting guests and seeing to each one’s personal needs. This is a kind of level of service that you can never normally replicate in a hotel. There seems to be a wide range of nationalities among the guests. Italians are here in force, but Austrian, English, and Dutch are in the mix.

Francesco speaks many languages, including, of course, his own mother tongue, which is Ladin. Don’t confuse Ladin with Latin or even Ladino, which was spoken in Spain and throughout the world by Sephardic Jews. The native language of Corvara and the other villages in the Alta Badia is quite separate to Italian. This is not an Italian dialect, but a Latin-based language in its own right. There are indeed about 41,000 speakers of it in the region, which has its own culture and cuisine.

This can be quite confusing to visitors to the Dolomites. The villages, mountain passes, peaks and refugees all seem to have two official names – one Italian and one in Ladin. To add to the confusion, most of the region is based in Sud Tyrol, formerly a province of Austria – and not Italy until 1919, and some villages are predominantly German-speaking along with the Bratwurst and Gulaschsuppe that goes with their mixed heritage from the break-up of the Austro-Hungarian Empire after World War One.

Here is our interview:
Francesco The hotel has been family-run since 1933. I’m the third generation, so I hope then that my son becomes the fourth generation and we grow him up year by year to do our best for this hotel.

Felice I saw a picture of the hotel in 1933; it was much smaller. When did you first add different stages of it to make it bigger?

Francesco So after the second war, most of the people saw so much potential here for skiing, tourism and in the summer also for hiking tourism. The valley was growing up very fast, and there was then in the end of the sixties the first boom of tourism, winter and summer.

Peter Is that still growing at the moment?

Francesco At the moment we have a bad situation with this pandemic of COVID but for sure when this will be finished, I hope soon all will be returned normal and the world international tourism comes back to Alta Badia in Corvara.

Peter Certainly today on the slopes, there were a lot of Italians, but not many other nationalities. I didn’t hear very many other languages, but no doubt that will come back.

Francesco Yes, now it’s the problem. The international guests to come here have to take a flight, and before taking a flight they have to do a test. So we have only to wait that this situation will be finished soon and then all will be fine and international tourism comes back.

Felice Do lots of people come here in summer as well, or is it mainly winter?

Francesco Main international is in winter; we here at Hotel Sassongher have normally 40, 45 different nationalities. In the summer, it’s in Italian hands so we have 90% Italian and then a mix of German, Austrian and some UK people. But in the winter is the most international tourism.

Peter Summer in the Dolomites is almost better than winter, in some ways. It’s so beautiful.

Francesco I also like the summer more. It’s completely different. I like to hike, I like to go by bicycle. We have only to promote it more because I’m sure that when the summer tourists come here and see this magnificent place, the Dolomites, they will come every year absolutely.

Peter Just to talk about the hotel: you have 65 rooms now, is that correct? 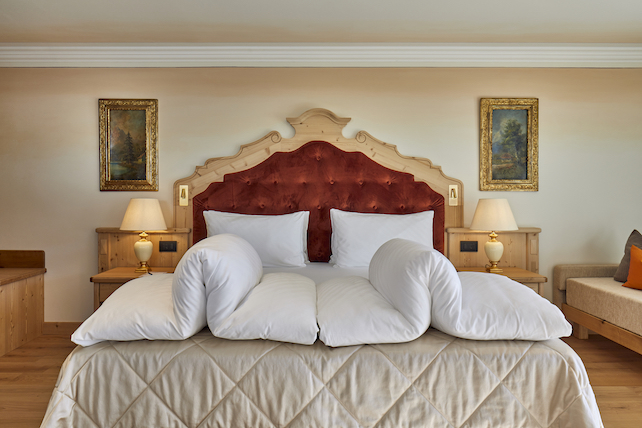 A room in Hotel Sassongher

Francesco Sixty-five since 2018, when we’d done the new renovation, before it was 52 and now 65, most of them are very big-sized rooms because our entry category is 26 square metres, then we have the Superior and Deluxe between 45 and 55 square metres, and two suites starting from 60 square metres.

Felice Do most people stay here half board?

Francesco Yes, 99% stay here half board, first of all because they know about our cuisine. They like it very much. And then you are on holiday and Corvara is not a big city, so to go out in the evening it became a little bit difficult. So most of the people decide to do half board.

Felice What we ate in the main restaurant and the food was fantastic. What’s the name of your chef?
Francesco Our chef is called Raffaele Matera. He comes from Ischia, so all his crew is from Ischia, and I hope he will stay a long, long time here with us.

Peter On the half board menu, there were things like lobsters and venison and wonderful lamb chops.

Felice As the chef comes from Ischia, does that mean that there’s a Mediterranean influence?

Francesco Absolutely, yes. But he grew his career in Switzerland. So he also knows all the technical methods to cook venison or local alpine food. But absolutely, we have international cuisine.

Peter The hotel is a landmark in Corvara. It stands on on a hill overlooking the town. It’s a little bit of a walk into town, but I think you have a courtesy bus?

Francesco Yes, we have two shuttles that are going around all the day bringing our guests to the slopes, pick them up or bring them in the village to shop or whatever they want. So they are going all around from eight in the morning until eight in the evening.

Peter You have lots of luxury things like you have a beautiful pool and you have a sauna, and what else? 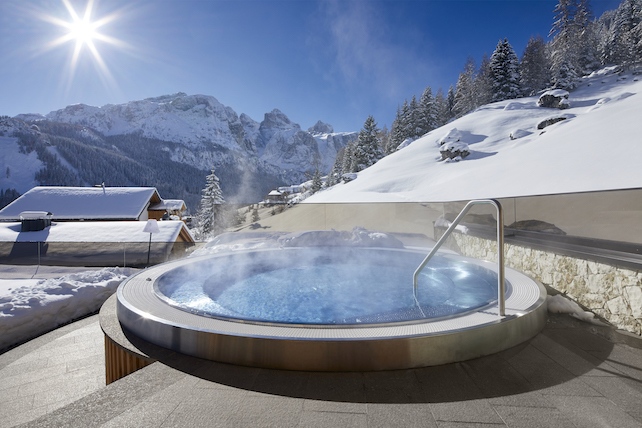 Francesco Maybe now with the new…a spa with a new construction…we have extended to circa 1000 square meters in the wellness area, and absolutely the top is the open area – the panorama sauna that every kind of guest will try it once when they’re here in the Sassongher.

Peter In the year 2000, you completely renovated the hotel?

Felice You mentioned that this year you’re going to put oak floors in every bedroom?

Francesco Not in every one because some guests want to have carpet. But now we have 40 rooms out of 65 with oak floors. So we try to put in another 10 and the remaining will be with carpet. 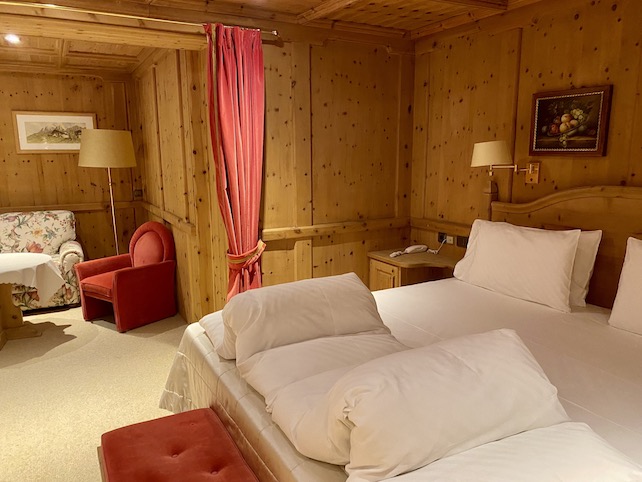 Felice We saw some beautiful rooms, but one of my favourites was Hubertus, which is not a huge room, but really sweet and with wood everywhere.

Francesco Felice, yes you like the Hubertus Suite, it’s 72 square meters high. But the particular of this with its 99% wood, from the wall to ceiling. So it’s a special room. It was in the ‘80s our bar, and after it became the room called Hubertus because Hubertus is the protector of our hunters here.

Felice Another suite that I liked was the Cinderella Suite.

Felice So Cinderella can stay there after she’s met the prince.

Peter What I love too are the old rooms, because you’ve got Stubli…very old rooms which you’ve imported into the hotel.

Francesco Yes, we found it in the ‘80s in a mountain hut not so far from here, and we don’t know exactly if it’s from the 14th or 15th century.

Peter Francesco, thank you very much indeed. We hope that you have a wonderful rest of the season, followed by a full summer season, and we all get properly back to normal before the start of next winter.

If you’d like to listen to our interview with Francesco at Hotel Sassongher, go to Action Packed Travel.

No Responses to “Hotel On High In The Sella Ronda”