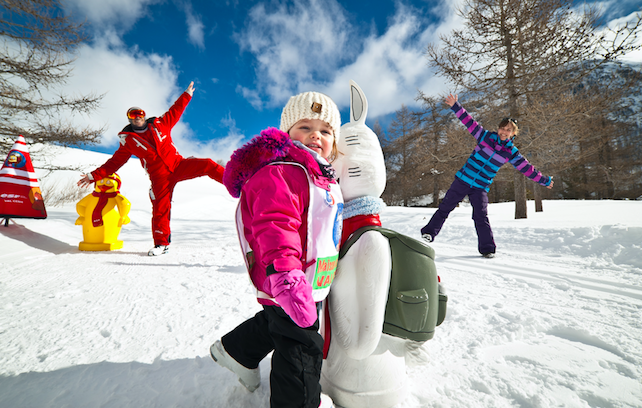 A vista of ever-changing scenery, tables to play games at and room for little legs to walk around – rail travel makes sense for families heading to the Alps. Daniel Elkan picks some of the best ski resorts that you can reach by train.

What’s the best way of getting your family from the UK to the Alps? Plane, train or car? Driving gives a degree of freedom en route, but also means children are cooped up for long stints in the back seat – not exactly a recipe for happiness. Flying might seem quick on paper, but in reality translates to a long conveyor belt of various queues and long transfers, as faces turn glummer and glummer. The eye-wincing prices that airlines charge at peak dates are salt in the wound. 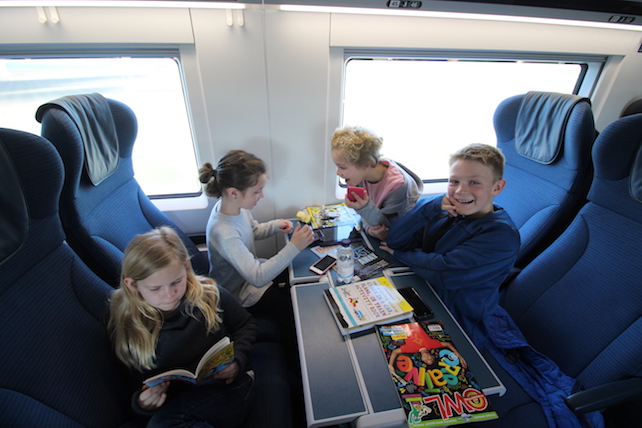 What then rail travel? In terms of a quality experience, the train works well for families. You’ve got space to move around, no limits on luggage and a more comfortable journey than flying or driving – and the journeys create a fraction of the carbon emissions of flying or driving.

Some destinations require a change of station in Paris or of platform at intermediate stations. This means a bit of schlepping luggage on and off trains. But apart from that, the actual changes are relatively simple. In terms of sustainability, rail travel creates only a fraction of the carbon emissions of flying or driving. But what about the cost? Although prices aren’t cheap, when you compare rail fares to peak-time flights you might save money with the train, especially given the discounts that apply to child fares.

So where can you go? Here’s our selection of ten great resorts that you can reach by train.

Although it isn’t that well known to the British market, Val Cenis is a family-friendly village located in the heart of the beautiful Maurienne Valley. The scenery is spectacular, overlooking the Lac Du Mont Cenis, part of the Parc National de la Vanoise. This is a great place to learn to ski, and the resort boasts the Alps’ longest green run, L’Escargot. There’s also a snowtubing course, up at 2500 metres, husky-dog sledding, ice climbing and – for the more adventurous – ice diving.

The charming village of Les Gets has streets lined with chalets and restaurants, and a little road-train that ferries skiers around the resort. The resort is part of the huge 650km Portes du Soleil ski area, so confident skiers can spend all day munching the mileage.

The local slopes suit beginners very well, with a network of tree-lined blue runs dotted with mountain restaurants. This winter the resort is introducing fat biking, with a new permanent circuit built between the top of the Mont Chery bubble-lift and the mountain village of Mont Caly.

Example journey: Depart London St Pancras 07:52 by Eurostar to Paris-Nord; change station and take the 12:45 TGV changing at Bellegarde to arrive Cluses at 16:35; from there it’s 25 minutes by bus or taxi.

The resort of Les Arcs celebrates its 50th birthday this season, and a new Club Med is opening in the village of Arc 1600. The resort has seen a suite of family-friendly developments in recent years, such as the Mille8 complex, which has a state-of-the-art toboggan run. Over in the Peisey-Vallandry sector, there are 15 fun modules for young skiers on the La Forêt run through the woods. Meanwhile at Arc 2000 the Rodeo toboggan run has a 3km trail with panoramic views.

Example journey: depart London St Pancras on the 09:45 Eurostar Ski Train to Bourg St Maurice, arriving at 18:58; from there it’s seven minutes by funicular railway to Arc 1600, with bus connections to the other villages; you can also travel by bus or taxi (35 – 45 minutes) from Bourg St Maurice to all the villages. 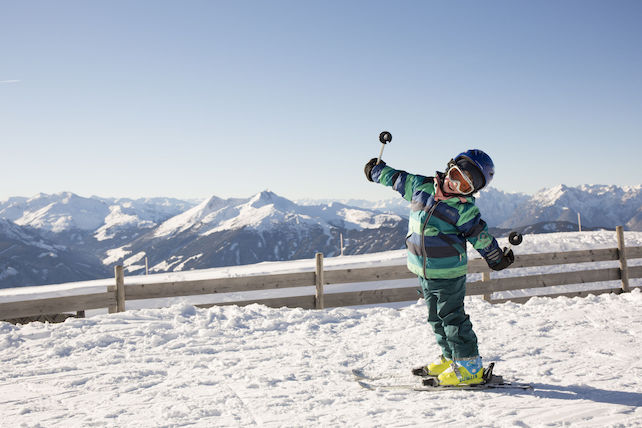 The Tirolean village of Alpbach is certainly one of the most beautiful in the Alps and has attracted families for years. Alpbach’s slopes are well-suited to intermediates, with smooth, groomed slopes linked by an efficient network of chair-lifts and gondolas. The centre of the village has beginner slopes on the doorstep.

Food on the mountain is hearty and good value. Böglalm is famous for its spit-roasted chicken, while Hornboden has a sun terrace with panoramic views. Gipfö Hit, meanwhile, is well known for its Knödel (spinach dumplings).

Example rail journey: Depart London St Pancras on the 15:04 Eurostar to Brussels; take the 18:25 ICE from Brussels to Cologne; then take the 21:21 NightJet sleeper train to Jenbach, arriving 08:53; from there it’s about 20 minutes by bus or taxi. 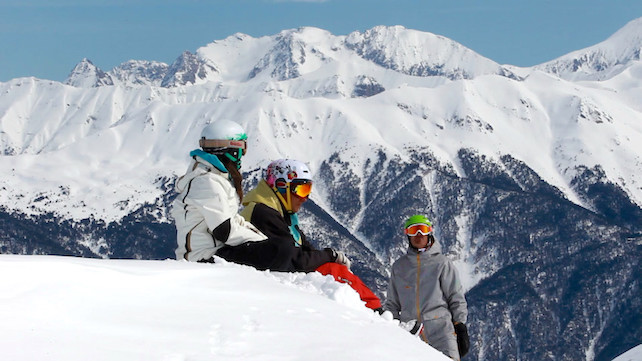 Located in the Southern Alps, the resort of Serre Chevalier is made up of four villages, and 80% of its pistes located above 2000 metres, giving good conditions for early and late season. Alternative winter family activities include a 2km descent on a steerable Mountain Kart sled, which you can ride from the top of the cable-car at 2491 metres, speed down 300m for 2km, as well as fat-biking and dog sledding. There’s also ice-climbing on frozen waterfalls near Briançon and La Schappe.

Example journey: Depart London St Pancras on the 09:24 Eurostar to Paris-Nord, change station by taxi and take the 14:41 TGV from Paris-Lyon to Oulx, arriving at 19:23. From there it’s 45 minutes by bus or taxi. 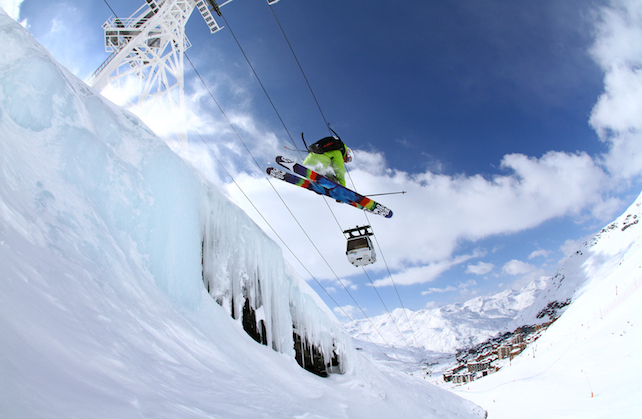 The highest village in the Alps, Val Thorens sits at 2300m atop the huge 600km 3 Valleys ski area. However, even at such high altitude, there are excellent nursery slopes and beginner runs just below the village. There’s also dog sledding, snake glisse and fat-biking – and the resort also offers the experience of riding a piste-groomer after the slopes close. The sports centre has plenty of sports activities and includes a vast 2000m2 aqua spa and wellness area – which might be needed after all the excitement here.

Example journey: Depart London St Pancras on the 09:45 Eurostar Ski Train, arriving at Moutiers at 18:27. From there it’s 55 minutes by bus or taxi.

The sight of a horse-drawn sledge ready to whisk you to your accommodation is sure to widen children’s eyes – if not adults’. But then Avoriaz, with its car-free, ski-in-ski-out village, is a very unique place.

Kids in particular will love the Aquariaz tropical pool in the village centre with its waterslide and swinging ropes – and a huge sledging area on its doorstep. There’s also a dedicated nursery zone right in the centre of the village.

Example journey: depart from London St Pancras to Paris Gare du Nord by Eurostar at 07:55 to Paris-Nord and then take the 12:11 TGV from Paris Gare de Lyon, changing at Bellegarde to arriving at Cluses at 16:35; from there it’s 50 minutes by bus or taxi. 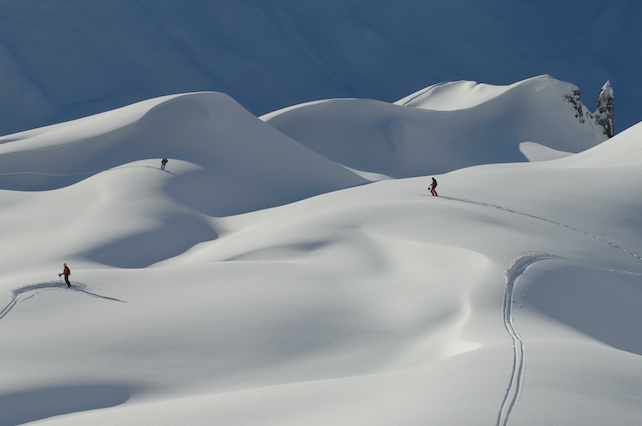 The journey by train to St Anton takes you past Lake Zurich and Lake Wallensee and through the spectacular Arlberg Valley – making it one of the most beautiful journeys you could make. St Anton’s reputation as a hub for advanced skiers often overshadows the fact that there are some very good slopes for those learning to ski, such on the gentle pistes over at Nasserein and the quiet slopes of Rendl – well suited to those progressing their carving skills. In the village, the History Museum gives fascinating insight into the development of skiing.

Example rail journey: Depart London St Pancras on the 18:01 Eurostar to Paris-Nord. Stopover in Paris and take the 07:23 TGV from Paris-Lyon, changing in Zurich to the 12:40 RailJet arriving at St Anton at 15:03. 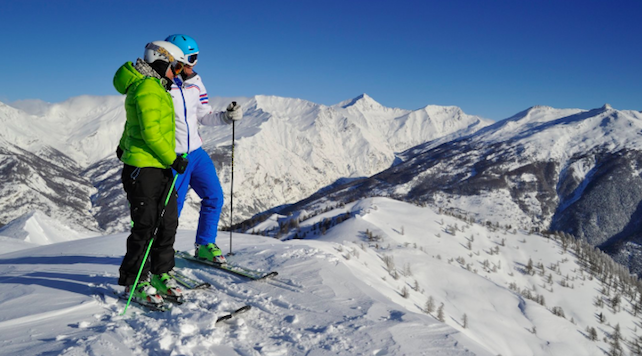 It’s fair to say that Bardonecchia is one of the most underrated resorts in Italy – and a great place for families with children learning to ski. There are kindergartens, play areas and ski school classes for the very young, while those progressing on blues and reds will enjoy the quiet slopes and lack of lift queues.

The resort has over 100km of pistes and the resort also has a floodlit snow tubing track, as well as ice skating in the village. When you arrive by train there’s no transfer needed – the railway station is actually in the village. 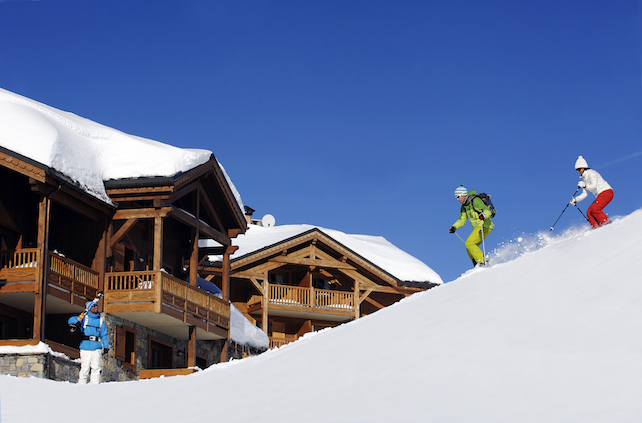 La Plagne is one of the most popular destinations for British families, and the high-altitude slopes means it is a good choice for spring skiing. Much of the accommodation is ski-in-ski-out, making it a quick transition from breakfast to slope. The terrain is extensive, with a vast network of blue runs that will suit improving skiers, as well as plenty to entertain the advance.

Example rail journey: Depart London St Pancras on the 09:45 Eurostar Ski Train, arriving at Aime la Plagne at 18:34. From there it’s 25-45 minutes by bus or taxi. 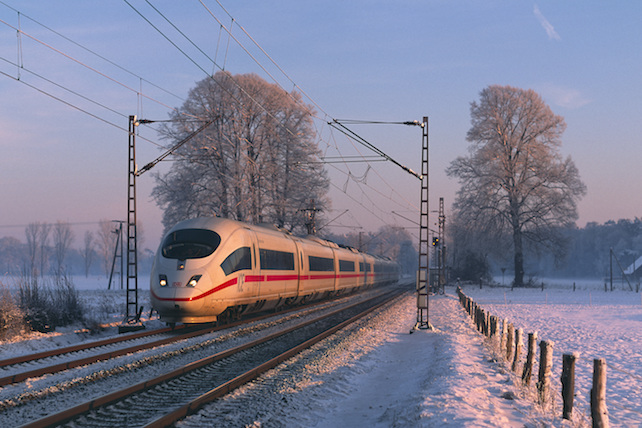 More information about rail travel to ski resorts can be found at independent guide, Snowcarbon

One Response to “Ten Fantastic Family Resorts by Train”