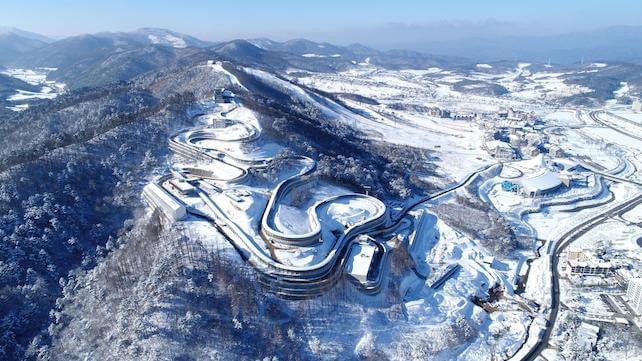 PyeongChang leapt into the spotlight in 2018: it’s the first time the Winter Olympics Games had been hosted in South Korea. Arnie Wilson visited the area just after the Olympics were awarded to the city and gives us a flavour of what the athletes and spectators would have found there.

Into the Dragon’s Den

Luncheon at the airport on my arrival after a 12-hour, 5,519-mile flight from London Heathrow? Very nice. Except it wasn’t lunch. It was Lncheon – the name of Seoul’s main airport built on Yeongjong Island. I’d misread the itinerary. I quickly made amends for my poor grasp of the written word.

My flight was early, and there was no sign of anyone waiting for me in the arrivals hall, where airport staff in suits (rather than western-style uniforms or overalls) sorted out the luggage carousels. There was, however, a sign (in the Latin/English alphabet) welcoming a Japanese visitor called Shigeki Tatsukawa. It was upside down. I pointed this out (with sign language) to the taxi driver. So far so confusing.

I settled down to wait, and sure enough, Kim – Kim Hee Yong – arrived to collect me. But did I call him Kim or Yong? If you climb a mountain and throw a stone, you will hit a Kim, he told me. And there’s something in what he says. 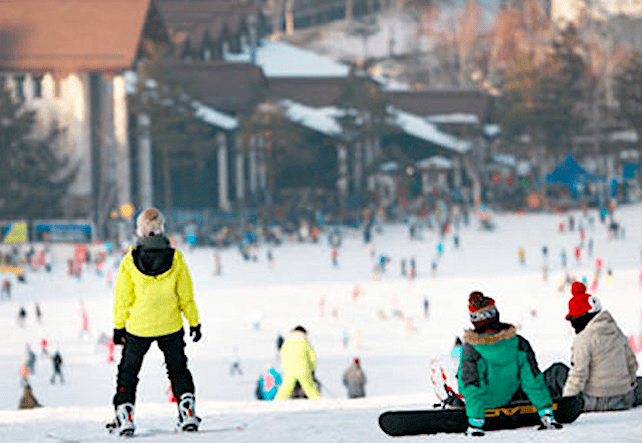 Names in Korea are complicated, but fascinating. Thanks to ‘surname extinction’ there are only about 250 Korean surnames currently in use, and the three most common are Kim, Lee and Park. The way my ‘minder’ explained it was that his surname, Kim – which precedes the given name – was the important bit. Calling him by his given name – Yong – is apparently considered rude in Korea. A typical Korean family will rotate through five generations of surnames and then start all over again.

Kim drove me across the 12-kilometre bridge between Yeongjong Island and the mainland. From there on it was down Highway 50 (The Yeongjong Expressway) connecting the Seoul area with Gangwon Province. The expressway covers almost 150 miles.

On its way to the seaside on the east coast, Highway 50 takes you close to South Korea’s best known ski resort: Yongpyong, in the north-eastern province of Gangwon-do, one of the two largest provinces in the country. These are the Taebaek Mountains and, in fact, some 70% of the country is mountainous – but there are no active volcanoes and there have been no big earthquakes.

A Taste of Korea 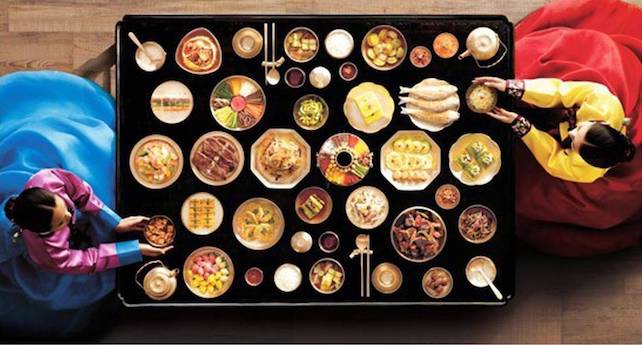 When it was time for my first meal I opted for squid and locally farmed pork belly bulgogi, with “hunted squid from offshore sea of Donghae” served with white shelled clam soup. And soup, of course, is for slurping – not the done thing in Europe, but perfectly acceptable and indeed expected (unlike blowing your nose, which is taboo) in this part of the world.

I soon learned that no main meal in Korea is complete without kimchi – a blanket name for various kinds of (usually fermented) vegetables which could be napa cabbage, radishes, green onions or cucumber. It’s virtually the national dish. Another big favourite is the use of perilla leaves.

In the coming days, when I dined every evening with Kim, I watched him use these big leaves almost like those thin pancakes you get with crispy duck in Chinese restaurants – to wrap food in. I gave the seaweed porridge a miss (how could it possibly compare with Heston Blumenthal’s snail version?) but I did try some local Makgeolli buckwheat wine. 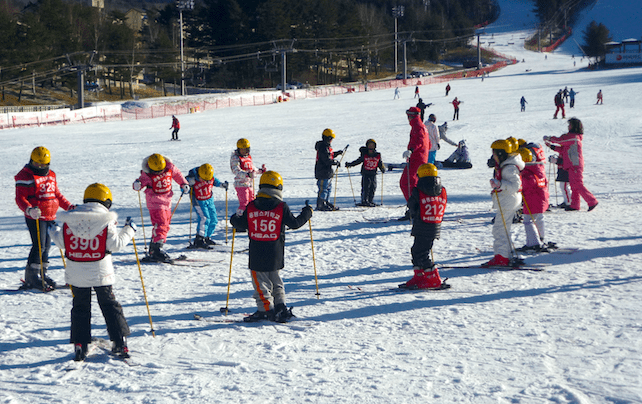 The ski season here runs from December to March and I was a little early for really good snow (it was still only the first week of December), so I had decided not to lug my skis to the other side of the world. The staff at the ski rental shop were eager to please. But, again, language was a problem. The longest rental skis they had were 162cm, but they did finally manage to find me a suitable pair.

When I asked if they could put the bindings on a DIN setting of eight. They went into a huddle round ‘my’ skis, looking carefully at the settings, but didn’t seem keen to make the adjustment. One of them then returned to me and apologetically said “there is no H”. He had mistaken my “eight” for “H”. At this stage, fortunately, the boss turned up and I was all set.

During my last day at the InterContinental Hotel in Alpensia I saw a familiar face – one of the rare non-Koreans frequenting the hotel. I had a feeling I’d seen his picture somewhere. “Aren’t you the chef?” I asked. “No, I’m Hans-Peter Betz, the (then) general manager – from Nuremburg” he replied with a smile at my embarrassment. “I hope you are enjoying your Korea tour, and some great days of skiing!”

I had indeed had fun skiing Alpensia’s collection of runs – cleverly named Alpha, Bravo (the longest run), Charlie, Delta, Eco (sic), and Foxtrot. After skiing that little lot, it was on to the main attraction – Yongpyong (Dragon Valley Resort). 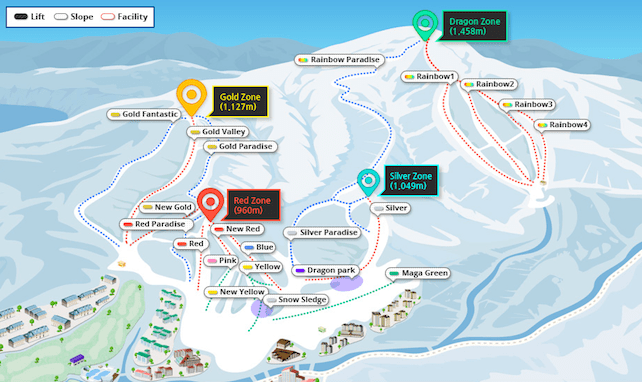 Although it was still daylight at 5pm as we drove through the gateway to the resort, the gatekeepers, bearing illuminated traffic wands, saluted us – as they do at most corporate places in South Korea, including golf courses.

This was more like it: thanks to some efficient snowmaking, many of the runs were open. And because they are so much longer than neighbouring Alpensia’s, I was kept busy throughout the day exploring them. The longest of all, from Dragon Peak, is the resort’s most prized run, with spectacular views from the top of the gondola.

Meanwhile, I found life-size cardboard cut-outs of some South Korea’s biggest TV stars from a popular Korean drama called Winter Sonata, some of which was filmed here. Fans were queueing to have their pictures taken next to them. 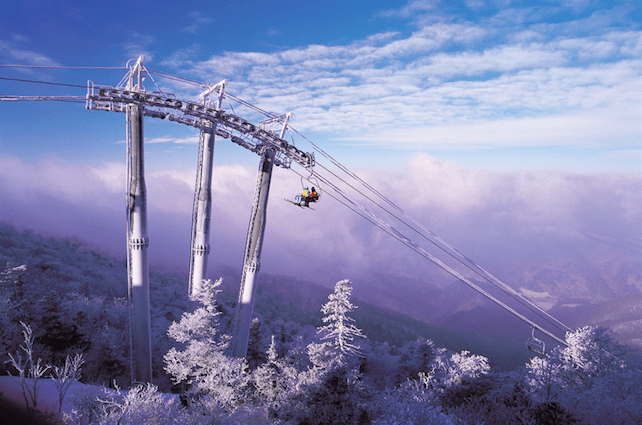 One of the chair-lifts at PyeongChang. Photo: (c) Korea Tourism Organisation.

The resorts in South Korea are a lot smaller and lower than those of the Alps, North America and Japan, but the infrastructure is every bit as good as you’ll find in mainstream resorts worldwide. There are 17 resorts in all, most are a few hours’ drive from Seoul.

There are four ski resorts within 30 minutes of the town of PyeongChang, 200km east of Seoul and in the province of Gangwon-do. Let’s start with the biggest: Yongpyong is purpose-built like all the others. It is Korea’s oldest resort, open since 1974, and known for being the best all-round resort in Korea. The ski area has 28 runs and 14 lifts, including a very long gondola which takes you 20 minutes up to Dragon Peak at 1458m. The area’s vertical drop is 640m, and the slopes are open daily from 8.30am to 2.30am the following morning. That’s right: all night.

In the Games, Yongpyong hosted the Men’s and Women’s GS and Slalom – mainly on the resort’s three back runs, Rainbow 1, 2 and 3.

Right next to Yongpyong, so close that they could easily have been linked by chair-lift (but the resort is owned by a different company), is the resort of Alpensia. It has six runs and three lifts, and a vertical drop of just 160m. Alpensia opened in 2011, together with some major infrastructure (such as a bobsleigh track) built specifically for the Korean Winter Olympics bid.

The resort may be small, but it has a state-of-the-art ski-jump stadium and, as you can guess, the ski jumping will be held here. Other events that took place here included the biathlon, the Nordic events and, of course, bobsledding. 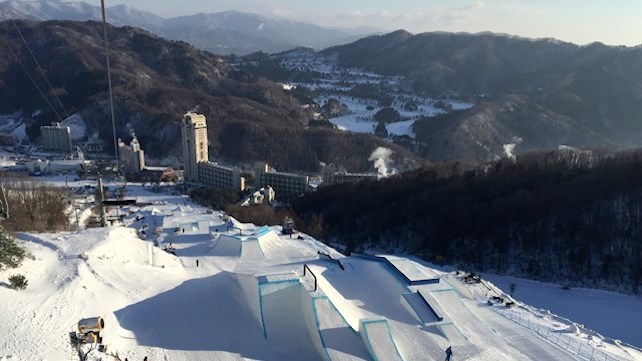 Phoenix Park is two hours from Seoul, also in the PyeongChang region, and known for being the best freestyle hill in Korea. It has two main peaks, Mont Blanc and Phoenix Peak, which are separated by a valley and access mainly intermediate terrain. There are nine lifts, 21 runs, and a vertical drop of 350m.

Jeongseon Alpine Centre was built especially for the Games, as nowhere else had a slope meeting the minimum requirement of 800m vertical for a Men’s Alpine Downhill. The area will host the Downhill, Super-G and Alpine Combined for both men and women.

However, members of the public hoping to be able to ski the run afterwards would have been disappointed. The organisers returned the area to its natural state afterwards, due to protests over its environmental impact.

Arnie Wilson stayed at the the Dragon Valley Hotel in Yongpyong and the the InterContinental Hotel in Alpensia. For further information visit Korea Tourism Organisation. See also our features on Top Olympic Male Skiers, Top Olympic Female Skiers, and The Best Ski Resorts for a Winter Olympic Buzz.

No Responses to “PyeongChang, South Korea”