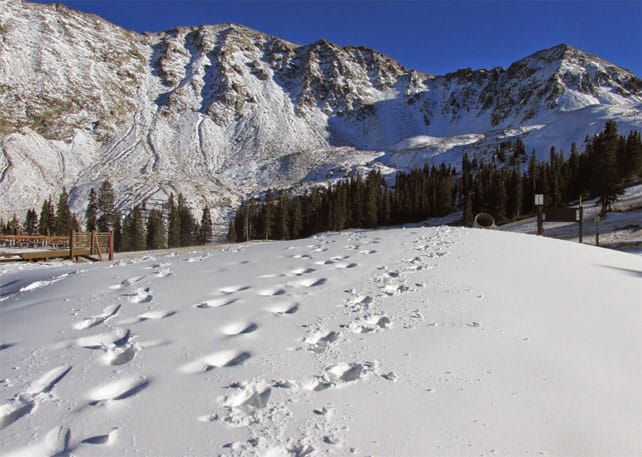 A mix of natural and man-made snow at Arapahoe Basin on Tuesday. Photo: arapahoebasin.blogspot.co.uk

Arapahoe Basin in Colorado will be open for skiing tomorrow.

It only closed at the end of last season on June 22. But yesterday, in the wake of a useful dump of snow last Sunday, and some really effective snow-making, the high-altitude ski area announced the lifts will be spinning from October 17.

“After touring the mountain and ‘dropping the blade’ a few times, the cat drivers were all smiles,” said A-Basin’s Chief Operating Officer and ace blogger Alan Henceforth yesterday. Crucially, he added, “they said they had more snow than usual to work with”, so despite the mild weather the decision was taken to get going for the 2014-15 season. 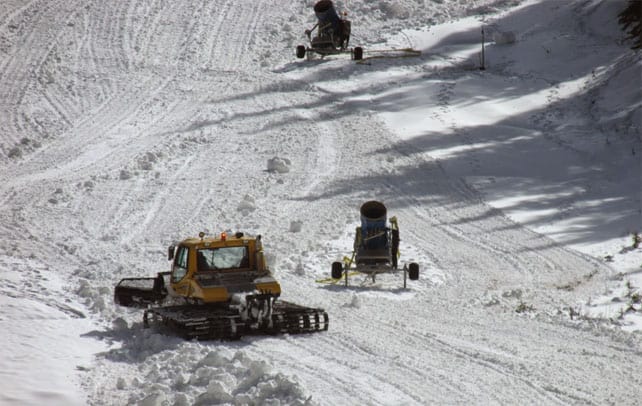 Grooming the first trail of the season. Photo: arapahoebasin.blogspot.co.uk

A-Basin’s great rival in the race to open, Loveland, which sits next to the I-70 Highway to Denver, gracefully admitted defeat.”Congratulations to our neighbors Arapahoe Basin Ski Area on their Opening Day announcement!” was the message from the resort, which can’t yet confirm when it will be opening. 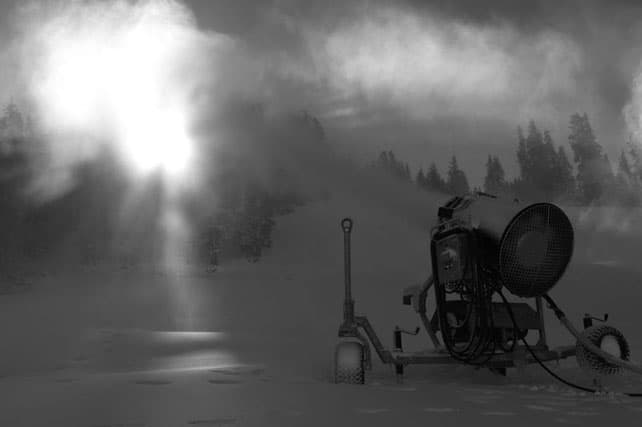 Tomorrow’s turns won’t be the first skiing in Colorado this autumn. In Silverton, to the south, ski patrollers were able to hike up the slopes and make a few turns on September 30. But A-Basin will be the first resort not just in Colorado, but the whole of North America, to open its lifts to skiers.

We say, well done A-Basin – especially its team of snowmakers! But the skiing public shouldn’t get carried away just yet with thoughts of an epic early winter. There will only be one trail to ski at A-Basin to start with. And October 17 isn’t an especially early start date. Last winter it got going on October 13.

Among the resorts planning to open in Colorado in the near future are Keystone (October 31), Copper Mountain (October 31) and Breckenridge (November 7).

Meanwhile, in the Alps, 11 glaciers are currently open for skiing, with more coming on stream over the next couple of weeks. There’s been some snow at altitude, as you’ll see from this Snoworks snow report from Tignes yesterday. (Click here if you can’t see the video below.)

However, it has generally been mild, and will be milder still at the weekend, before temperatures drop back next week. The mid-range forecasting charts are starting to look promising for the end of the month, too. But it’s too early to be certain yet! 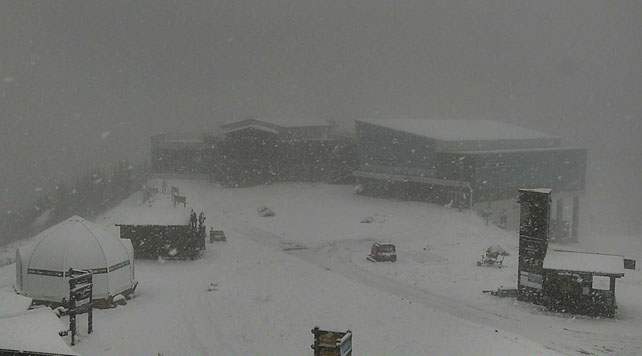 Meanhwhile, Whistler, Canada, got its first snow of the season yesterday. Photo: whistlerblackcomb.com