Three Valleys Skiing: How to Avoid the Half Term Crowds 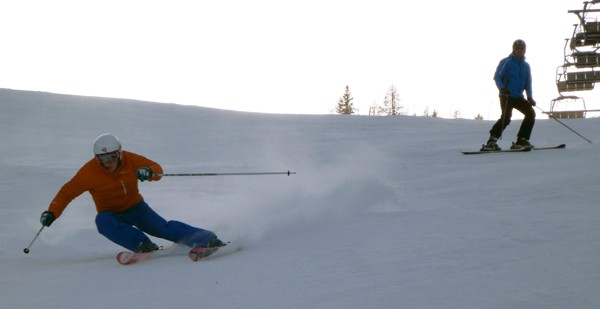 I’m a big fan of skiing in The Three Valleys. Having skied a lot of places over the years, I can tell you for a fact that the world’s largest inter-connected ski area really takes some beating.

But here’s the problem: it gets really busy. It’s no secret that the likes of Courchevel, Meribel and Val Thorens are great places for a ski holiday. And if you’re a British tourist – and particularly if you have a family – you’re likely to find yourself heading there during one of the dreaded high-season weeks.

Worst case scenario, that could mean half term. Which leaves you with two options:

If, like me, you find yourself leaning towards the latter (and why wouldn’t you?), then you’re in luck. Here are five tips that should improve your experience of Three Valleys skiing, making it tranquil and free of long lift queues…

1. Set off early on Friday

First off, the transfer. As soon as schools break up and offices close on Friday afternoon, the game has begun. Half a million UK-based skiers and snowboarders are already hurtling home to finish their packing and head to a major airport or ferry terminal.

So how do you beat the system? Don’t get sucked in. If you can, get a flight or ferry crossing before 5pm on the Friday, leapfrogging Saturday’s transfer day altogether.

Insider Tip: If you’ve booked a package deal, setting off on Friday might not be possible. But several operators, including London-based Erna Low, will allow some flexibility. The same operator also offers a £100 saving if you take a ferry to Zeebrugge instead of Calais. Which means direct access to the superior Belgian motorway system, and a better trip. Prepaid motorway tags are also available, which will skip any messing around at toll stations.

I did exactly that when I travelled to Meribel this week, taking a 5pm ferry into Calais. Meanwhile, a group of friends didn’t travel until midnight, finding themselves in a standstill traffic jam on arrival in France. The difference in our journey times? 15 hours door-to-door versus a whopping 24 hours.

Which shows that the sooner you leave the UK at half term, the better.

You might be on holiday, but that doesn’t mean you deserve a lie in. It’s true what they say: the early bird catches the worm.

If you need ski rental, pre-book it so that you have all your gear ready the night before you ski.

On day one, get to the lift station at 9am sharp and you’ll be one of the first skiers on the mountain. If you haven’t sorted out your lift pass yet, arrive 30 minutes earlier.

If you do all that, the first hour of skiing will be absolute bliss. There’s very little that beats carving down freshly-groomed pistes without another soul in sight.

3. Get the hell out of Dodge

Whilst Courchevel and Val Thorens (and to a lesser extent, Les Menuires) are popular with the British market, chances are that you’re staying in Meribel.

If that’s the case, be aware that you’re not alone. Meribel is a big town, with a whole lot of tourists. It’s also right in the middle of the ski map, accessible on one side from Courchevel and La Tania, and on the other from Les Menuires and Val Thorens.

Which means that a lot of the time, it becomes a thoroughfare for the whole Three Valleys skiing area.

So do yourself a favour: get out of there as quickly as you can. For obvious reasons, the extremities of the ski map have the least traffic. And during half term, that equates to the best skiing.

If the visibility isn’t perfect – or even if it is – you can’t go wrong with heading over to Courchevel. Plenty of trees makes for some interesting descents in clear light, and some of the runs are truly world-class.

If you want more explicit information on where to ski, the Guide to the Mountain in Meribel is a good place to start.

4. Make use of the ski school line

If you’ve ever been skiing in France before, you’ll have noticed that without exception every lift has a designated lane for ski schools. Paying customers and their instructors never have to wait in line – they go straight to front.

Which makes skiing with an instructor the single best way to avoid the queues during half term. If you’re anything short of an expert skier, it’s as good an excuse as any to check your ego and pay for some tuition. You’ll be surprised at what it will do for your skiing.

Edit: As reader Dave Meyer points out, the ski school line isn’t just for the ESF – but for all ski schools. In Meribel alone there’s a wide range of British ski schools, so feel free to choose somewhere that best suits your needs.

Finally, here’s the easiest and cheapest tip of all. Just like in every ski resort, between 12.30pm and 2pm the pistes get quieter and the restaurants get busier.

Wherever you’ve opted to ski for the day, don’t miss out on this opportunity. Whether you pack a sandwich and eat it on the chair-lift, or just break for lunch after 2pm, skiing through the lunchtime break is a simple way to get the pistes to yourself.

And if you do fancy lunch at a mountain restaurant, why not try a secret one that few skiers know about?

Did I miss something?

Of course, there are plenty of other little tricks that will get you out of traffic this half term. If there’s a particular run you want to share with us, or an insider tip you don’t mind divulging, tell us in the comments below or tweet @welove2ski.

19 Responses to “Three Valleys Skiing: How to Avoid the Half Term Crowds”