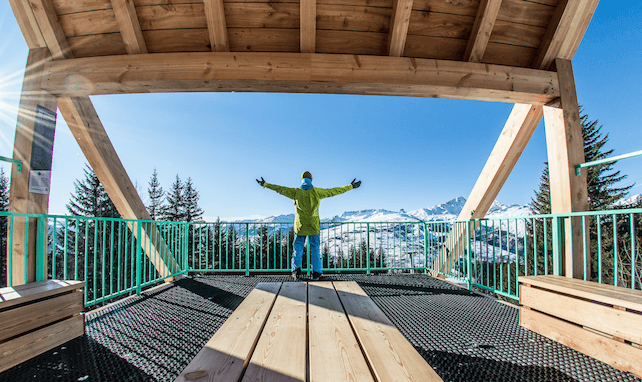 Remember the old concept of ski holidays? They were all about…well, skiing actually. Start early, ski all day, with a nice lunch maybe to break up the day. Then came the difficult snow years of the late ‘80s, when resorts – particularly those in France – realised that when the snow was late or arrived in insufficient quantities, particularly before Christmas, they had to dream up other attractive ways for visitors to entertain themselves.

Along with this came the concept that even if there was plenty of snow, you didn’t HAVE to ski all day. And even back then, Les Arcs was always at the forefront of innovative ideas.


Now imagine a young family of mixed skiing abilities (including complete beginners) arriving in Les Arcs, which – linked with La Plagne – forms Paradiski, one of the largest ski domaines in the world. Where do you start?

There’s no way you’re likely even to climb aboard the double-decker Vanois Express to get across the Ponturin gorge in order to reach La Plagne, never mind covering the network of pistes around the various Arcs (1600, 1800, 1950, 2000) and neighbouring Peisey Vallandry.

But if this family is staying in Arc 1800, the solution is right outside their door. A mini self-contained all-purpose “resortlet”, called Mille8 (a play on words in French for “1800”), with its very own (new in 2014-15) Les Villards gondola, was officially opened in mid-February 2016 during a spectacular son-et-lumière show. (A limited embryonic Mille8 had opened the previous winter, but this winter was the official grand overture.) 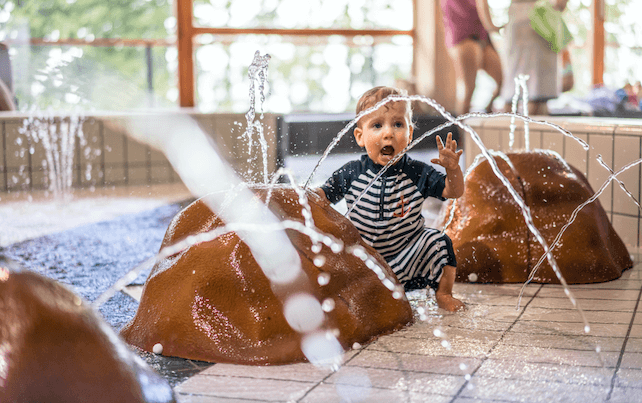 A swimming pool for all ages.

At the heart of Mille8 is the Piscine at the Aqua-Leisure centre, which incorporates a leisure pool, bubble massage beds, whirlpool bath, grotto, waterfall, Turkish baths and sauna, relaxation room, fitness area and an “Aqua” gym. (Notices tell you must wear swimming costumes – no impromptu bathing in underwear!)

There are various charges to use the different facilities at La Piscine; our advice would be to buy the six-day Ski Pass and Pool Package, which for an extra 10€ gives you everything in La Piscine for your entire stay.


Mille8, with magnificent views of Mont Blanc, contains just about every element you could imagine from the huge Paradiski area. The only things missing, by design, are the more extreme ski resort elements of black runs and serious off-piste – aspects of skiing that the vast majority of family skiers are hardly likely to be concerned with.

Mille8 also expands and extends some typical “ski” holiday pursuits that are not just about skiing. The activities available under the banner of “ski, swim, savour, play” (gondola included) continue after dark every night – celebrating a more active version of apres-ski, accompanied by music and special-effects lighting. 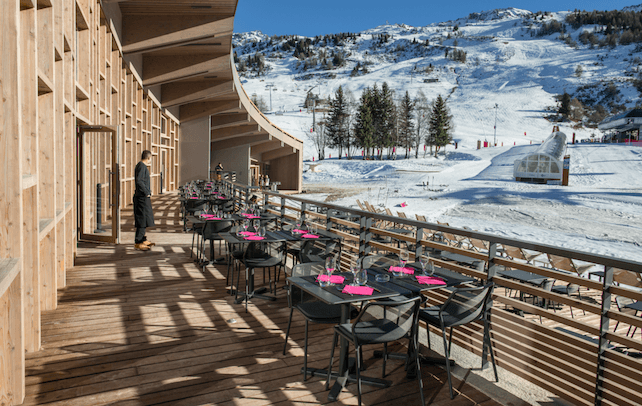 The centre-piece of the concept is Le Lodge and its restaurant, from where parents can admire their children’s progress on a safe beginners’ area, or even trying a junior freestyle run on the “Les Bosses” section, which combines freestyle elements with boardercross/skicross-style itineraries and music day and night to “create a hybrid universe”.

There’s a golf simulator in the Lodge, and you can also enjoy a “Snowga” session there: yoga with snow. In theory you can do this on a mat in the snow outside, but during our stay it was too cold. So some of us took refuge under blankets inside the Lodge whilst enjoying head massages.

In spite of its name (Les Bosses means bumps in English) I was relieved to find there were no moguls on the course – just a very pleasant easy slope.

By way of contrast, the relief was less obvious on the Luge Course. Having spent much of one childhood winter tobogganing above Montreux, Switzerland, I was intrigued to see what the toboggan run would serve up in the way of thrills – and spills.

And I was not the only one to find this the most testing of the Mille8 attractions. Almost all of our group of guinea pigs said the experience was tougher than they’d been expecting, and many of us took a tumble. 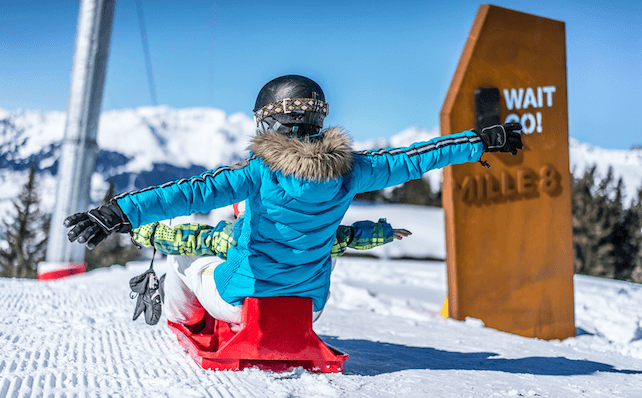 Start of the Luge Course.

You get to choose your own toboggan. Two have steering wheels: the “Speedy” and the “Big Bus” which can accommodate an adult with a small child. We were warned against choosing the red “Rocket” sledge which you have to control with your body as you hurtle down the “wild 900m descent”, accompanied by a kaleidoscope of coloured lighting.

Les Pingouins (you’ve guessed it – it’s French for Penguins) is a small children’s area (roughly half the size of a football pitch) just above Arc 1800 which has a mini toboggan run and an area for children who have just started learning to ski. There’s a magic carpet to get them back to the top. Also on hand – an igloo, plastic “penguins” and a “baby snowpark”.

Le Cube is another beginners’ area also accessed by the Les Villards gondola and – once you’ve skied down – a magic carpet to get you back to the top, from where you get the best local views of Mont Blanc.

Les Cabanes refers to some little wood cabins on an easy “discovery trail” through the forest, softly lit after hours, with a few pit-stops where you can stop to admire the view or have a chat. You can even improvise a barbeque with your friends at dusk. As you near the bottom, children can enjoy tapping their poles on a giant xylophone.

Les Sapins is a footpath “for nature lovers” (no, not naturists – far too cold for that!) In fact it’s for non-skiers to enjoy a spiritual walk in the Mille8 forest. And maybe watch the tobogganers and skiers buzzing around on nearby trails. Or they can simply gaze out at the stunning mountains that surround Les Arcs.

Although Mille8 was officially declared “open” in February, it’s still a work in progress. We were told that every winter the concept would be refined as more and more feedback is received from visitors. So it’s up to you. Tell them what you think!

Access to many of the activities is included in your lift pass, and everything is open until at least 7.30pm – and until 8.30pm on Wednesdays, Thursdays and Fridays. 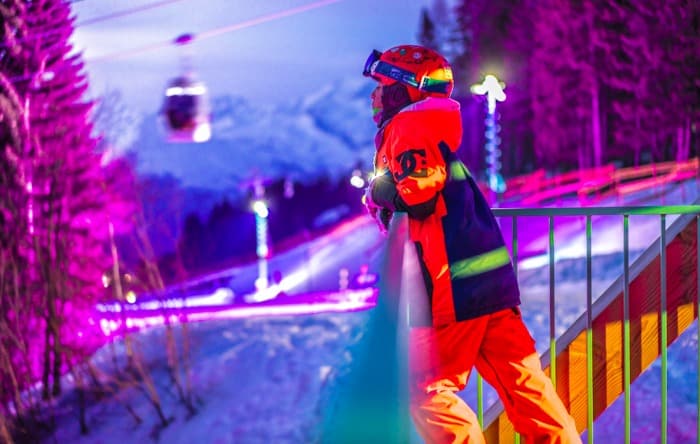 No Responses to “Giant Funpark In Les Arcs”