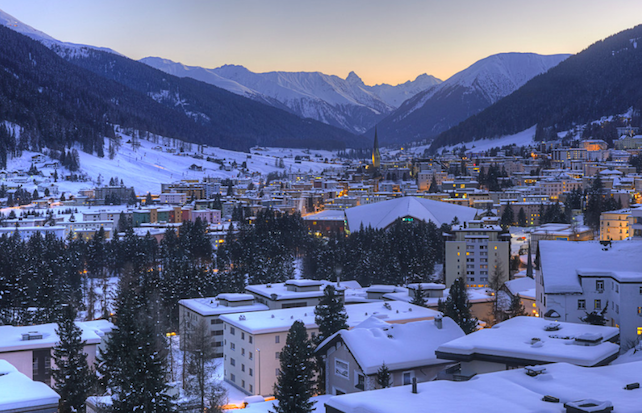 Davos is really five resorts, inconveniently linked and dotted along both sides of a long valley, being the Parsenn, Madrisa, Jakobshorn, Rinerhorn, and Pischa. The town itself seems to drag on for miles and cannot accurately be described as of the archetypical ‘chocolate-box’ variety; it’s more like Croydon-on-Snow.

But raise your gaze above the blockhouse shops and squat apartments lining the main drag, and drama and loveliness will confront you. 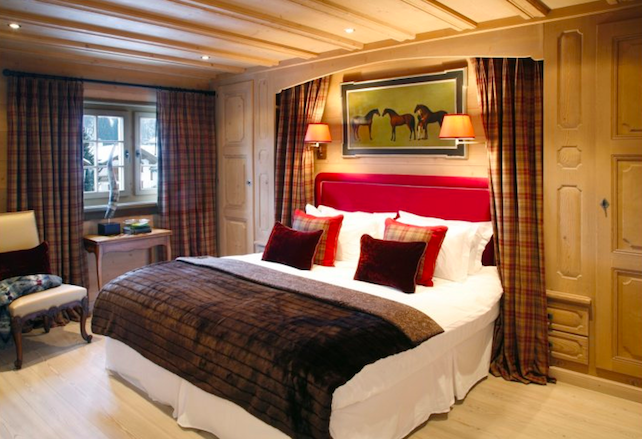 One of the bedrooms at Tivoli Lodge.

The annual World Economic Forum (WEF), of which more later, attracts the billionaires, the powerful, royalty and heads-of-state. Requiring nothing but the best is a prerequisite. For superior digs, the Tivoli Lodge cannot be surpassed. Nestling above the ugliness of downtown Davos, it is a bolt-hole for the rich and famous (precisely who is never revealed, despite extensive investigations) The Swiss have an expression for this: die Verschwiegenheit: secrecy, discretion, reticence, seclusion. And they value it in this part of the world. British Royals have relied on it for decades, as have POTUSs, PMs, CEOs, and celebrities.

Eight staff attend to the needs of up to twelve adults and six children: two chauffeurs, chef, sous-chef, hosts, deputy manager, and Anna the super-efficient and lips-sealed manager. 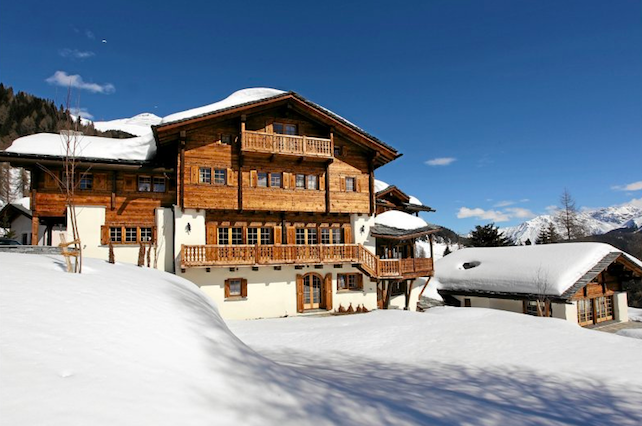 Built of local stone in the local Graubünden style, it marries contemporary and classic designed by Henriette Von Stockhausen of VSP Interiors who planned each room around art works selected by the owners. Head to the basement for pool, sauna, hammam, children’s two-storey soft-play area, ice-castle and ball-pool.

Every room has a superb Bose sound speaker system, and Apple TV, Freeview and Netflix. 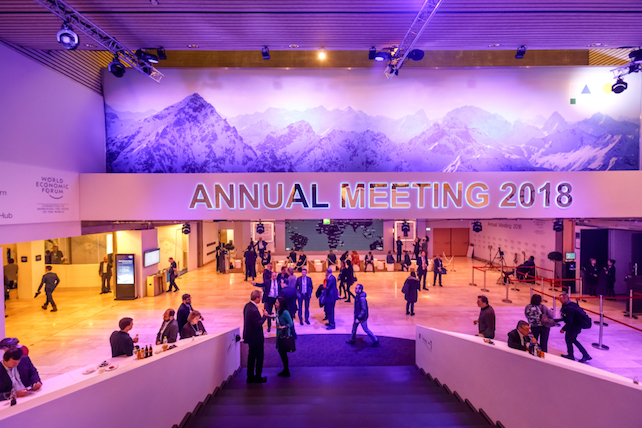 Held annually at the end of January, it’s a swapmeet of ideas, conferences, and networking. Much of the significant work is ‘off-grid’ – in other words, in discrete private chalets such as the Tivoli Lodge, hotel suites, and rooms away from gaze of the public and press.

There’s not a spare bed to be had during WEF. The centre of Davos is sealed off by the Swiss Army, and only vehicles with security clearance can get in. Town-centre shops clear their normal displays into backrooms and lease out the space for delegate meetings, receptions, and exhibitions.

There’s only one way to get there for the top-dogs, and the air buzzes with the woof-woof of helicopters. Macron, May, Merkel. Each have their moments in the limelight until The Donald upstages them with his arrival in Marine One White Hawk and six flanking helicopters. Apocalypse Now 2.

It’s a glorious free glimpse into the world of Bill Gates, Branson, Bono and the like. 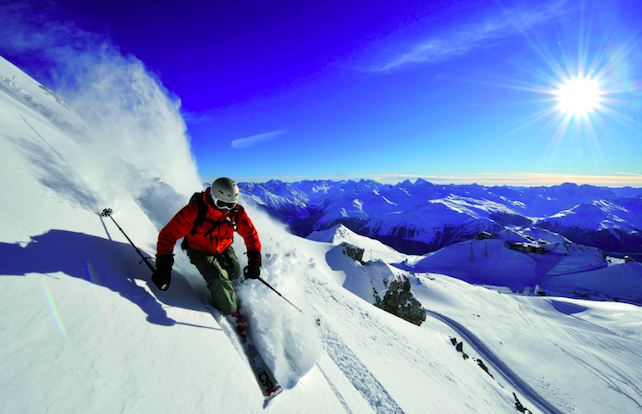 Of the five ski areas that make up Davos Klosters, the Parsenn is unquestionably Top Dog. Access is from slap-bang in the centre of town. With a mix of ultra-modern and 80 year old engineering, skiers ascend to 2600m in 20 minutes on the two-stage Parsenn Funicular. Riding the steeply-canted train harks back to childhood visits to the Science Museum in South Ken, before it went all screens-and-interactive.

As you stand clinging on at just-off-the-vertical, the bright-red carriages rocket you through a Dr Who time/space continuum tunnel at a giddy 10 metres a second…almost worth the price of the lift pass just for the ride (well, almost. At 70CHF – approx. £53 – a day, it’s probably best to ski as well).

Here Davos comes into its own. Over the back of the hill from the funicular are reds winding down, down to proper ski-through-the-farmyard finishes at the hamlets of Küblis or Serneus, and a train or taxi back. The 12km trails, from the curving hunched shoulders of the high mountain high, to gentler contours as the treeline appears, are joyful affairs.

But before committing to the end run, there’s more lift-action at the Parsennhütte tucked steeply in a gorge.
Why the banned-by-the Beeb naughty boys of Top Gear haven’t been up here is a mystery. A new six-heated-seats weather-hooded chair opened this season linking Davos with Klosters (the correct terminology for Davos now being Davos Klosters). 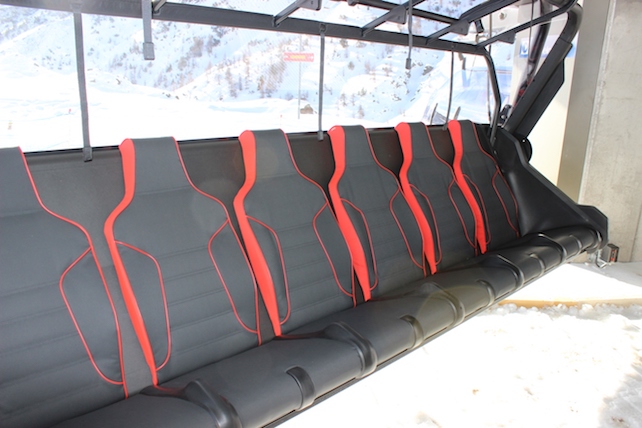 The Tourist Office heralded the new lift thus: ‘The “Furka Zipper” describes the benefits of the chairlift in a word: …it links the Parsenn and the Gotschna ski arenas, hence it links Davos and Klosters, rather like a zipper’. No childish giggling please, just let Messrs. Clarkson, May and Hammond discover it.

It should have been named so much more appropriately, particularly for people who describe themselves, in that ghastly phrase, as ‘Petrol Heads’, for the seating, F1 style black trimmed in red, immediately suggests Ferrari styling. Indeed it has now become just that among our group of UK journalists – the Ferrari Lift. Someone missed a valuable marketing trick there. 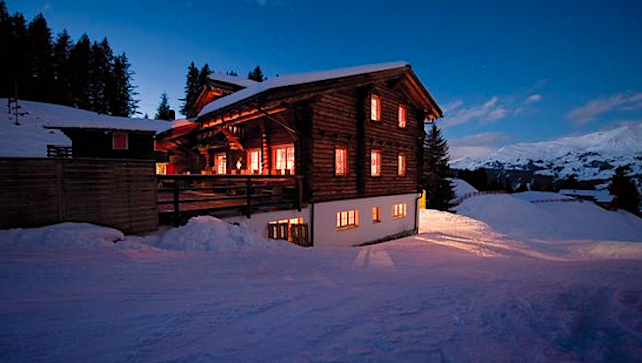 The perfect place for lunch on the Parsenn is a Schwendi Hütte. One of them, the Berghaus Alte Schwendi ticks all the requirements: traditional, roaring fires, dangling cowbells, old wooden skis on the walls, and Josefin and Nici to welcome those in need of a livener-or-two. Their pride in local produce isn’t some false trendy claim: the orchard outside planted by their grandfather stills yields apples for sauce on Rösti. Their mother gathers the elderflowers for syrup. Burgers, Angus beef style, are big hit here with Älplermaccaroni a close second. There’s a huge terrace if the weather is appropriate. For those wanting to delay their descent at the end of the day, the Berghaus Alte Schwendi is also a natural apres-ski stop. Situated at the top of the tree-line, the romantically-named Piste 21 runs down to Klosters and the train back to Davos.

A word here about Klosters. You’ll recall the royal connections I’m sure, somewhat the less so in recent times where ‘Verbs’ has taken over with the ‘Young ‘Uns’. The pretty village, hidden down the valley from its blockhouse big brother Davos, welcomed HRH Prince Charles and his chums annually. Its fame began in the 1950s. Dubbed ‘Hollywood on the Rocks’ it drew the likes of Paul Newman, Gregory Peck, Yul Brynner, Lauren Bacall, and Greta Garbo. Deborah Kerr married Peter Viertel in 1960 in Klosters. Gene Kelly danced on the tables in the bar of the legendary Hotel Chesa Grischuna. Rex Harrison plotted My Fair Lady with the hotel pianist. Pop into the hotel and check out the visitors book. 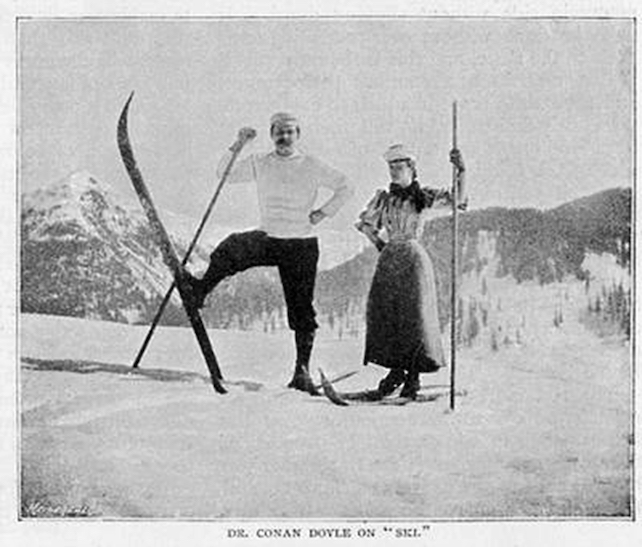 In the mid-19th century Davos’s pure microclimate drew those with lung diseases to the new-fangled Sanatorium Spengler. R.L. Stevenson brought his TB together with a suitcase full of the unfinished manuscript of Treasure Island. Within months his coughing improved and he finished his masterpiece.

Later Sir Arthur Conan Doyle came with his wife, also suffering with TB. Bored with inactivity, he sent off to Norway for some skis – seen on a visit there – and set about teaching himself with the help of two local Likely Lads, the Branger Brothers. Fearing ridicule among the intensely conservative townsfolk, they practiced at night.

Next they decided to attempt the hazardous journey to Arosa over a 3000m pass. No avalanche transceiver or Gore-Tex, just a stout 2.5m pole with skis to match, and his trusty pipe. Of the descent, he penned this delicious bit of ski writing: “…we shot along over gently dipping curves, skimming down into the valley without a motion of our feet.  In that great untrodden waste, with snow-fields bounding our vision on every side and no marks of life save the tracks of chamois and of foxes, it was glorious to whizz along in this easy fashion.”

Fast forward to 2018 where the ultimate irony must be in the newly-opened The Hard Rock Hotel, housed in the shell of Sanatorium Spengler. Perhaps the faint ghostly echoes of wracking coughing can be heard over the Rock Om Yoga session with DJ Drez, while surrounded by such irresistible memorabilia as a sequin sweater by Michael Jackson, a lace outfit by Taylor Swift and a silk shirt by Elvis Presley.

Michael Cranmer is a freelance ski writer who was previously prize-winning Picture Editor at the Sunday Times (10 years), The Associated Press, The Sunday Correspondent, The Western Morning News. Consultant to The Straits Times Singapore. He has worked extensively in Europe, Northern Ireland, Middle East (including Lebanon, Egypt, Cyprus), Far East, Africa, India, and North America. He is a lecturer in Photography and Picture Editing at Plymouth College of Art, and qualified as BASI 3 Ski Instructor in 1990.

No Responses to “Five Reasons To Visit Davos This Winter”