The Best Ski Resorts for Families in the Tirol

What makes the best ski resorts for families in the Tirol special? Simple: it’s the mix of Austrian hospitality, easy-peasy nursery slopes and the chance to sample more of winter than a freshy-groomed piste. Here’s our pick of them – each with a distinct personality, and plenty to offer the grown-ups, too. 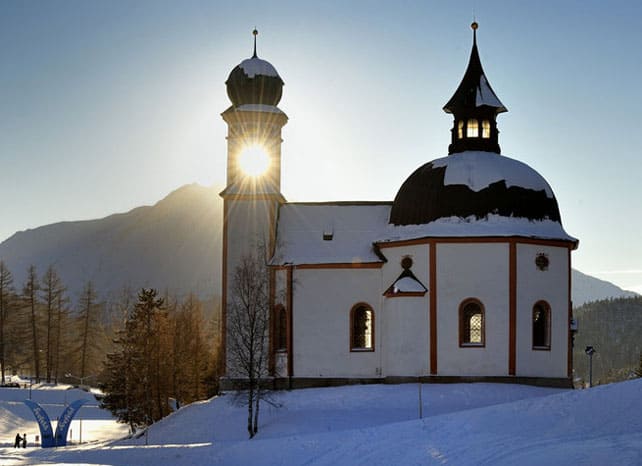 A cute and car-free town centre

With nursery slopes nearby 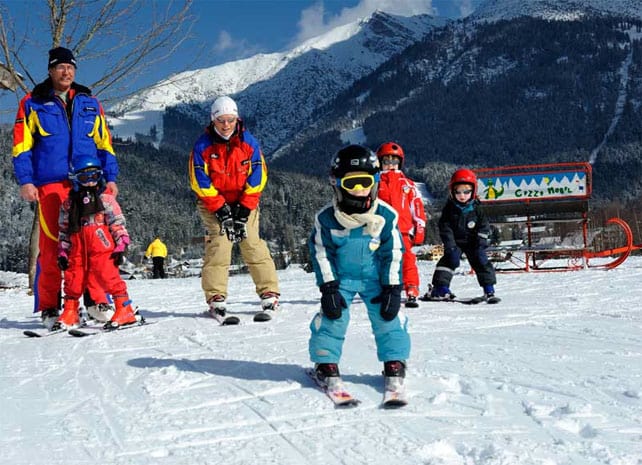 And lots to do besides skiing 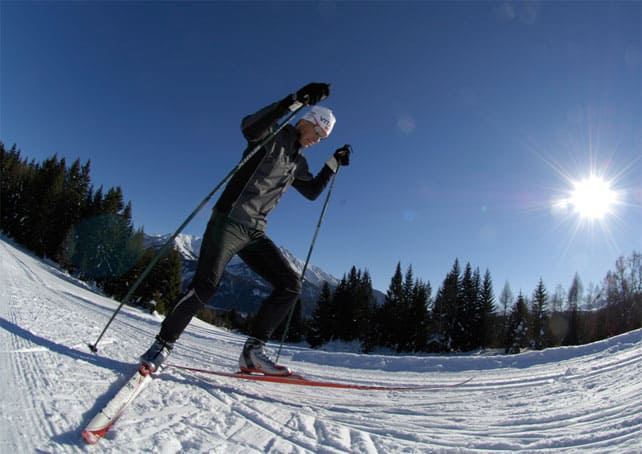 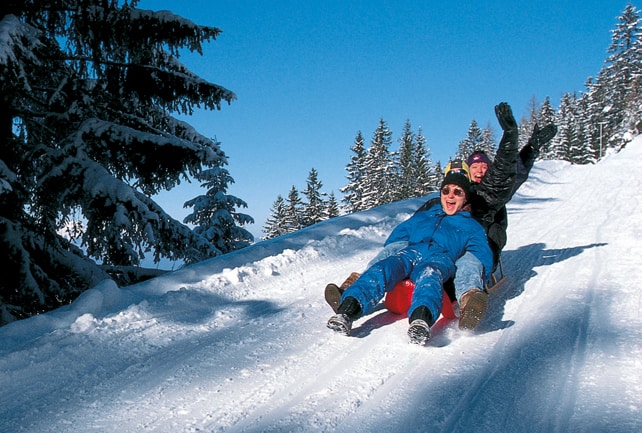 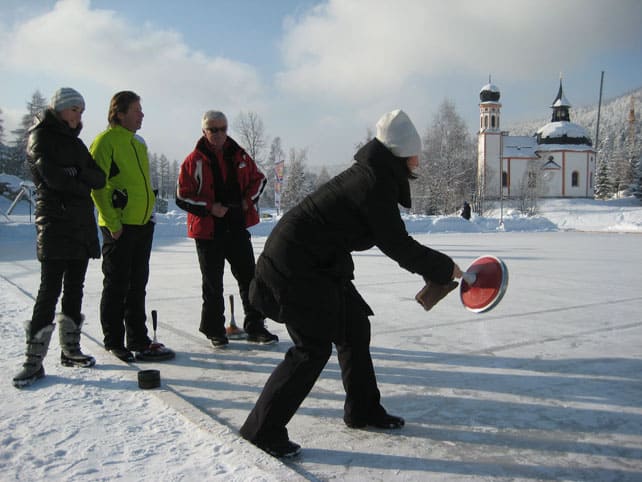 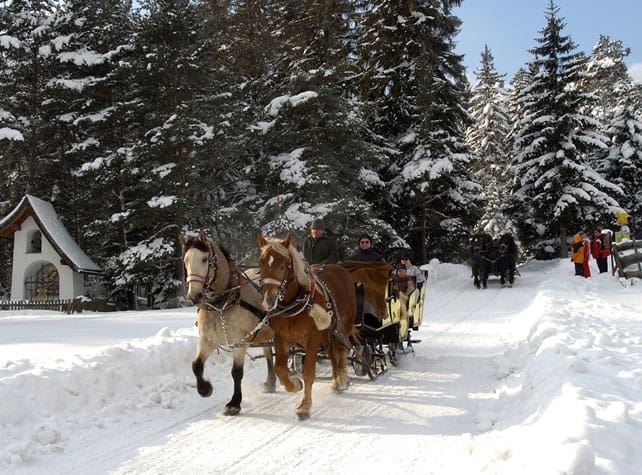 …both indoors, as well as out 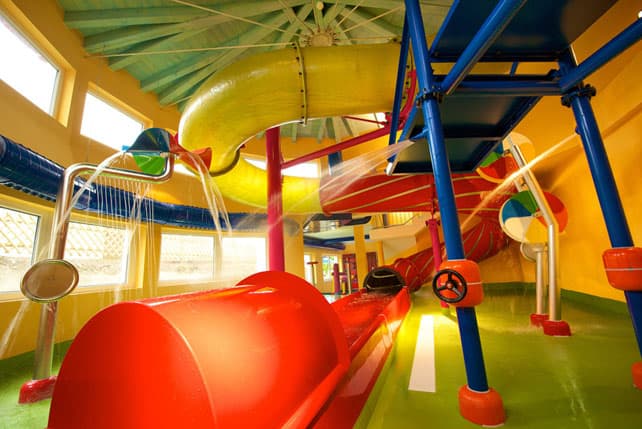 If you love the idea of winter, but find the skiing world a bit – you know – hearty and hell-for-leather, then Seefeld is for you. Set on a snowy, forested plateau, 25 minutes from Innsbruck airport, it’s one of the best ski resorts for families who like their slopes gentle and the mountain resorts sparkling rather than sporty. Here, cross-country skiing, curling and sleigh rides are as important as downhill skiing. So too is relaxing in your hotel spa: and the pace is a lot more measured and easy-going as a result.

That said, there is still good skiing in Seefeld for beginners. The nursery slopes are more or less in the middle of town, which will reassure the kids, and they can progress to the easy blues on the north face of the 1500m Gschwandtkopf when they’ve mastered their snowplough turns. Meanwhile, Mum and Dad can take a few turns on the forested slopes of the Seefelder Joch. Or maybe have a crack at the biathlon, which mixes cross-country skiing with target-shooting with an air rifle.

Then, at the end of the day, how about a spot of family tobogganing?

Bear in mind, however, that Seefeld is set at 1200m, and that all the best beginner slopes are beneath 1500m. That’s low by modern standards: holiday here between Christmas and February half term for the best chance of soft, powdery snow.

When it comes to accommodation, one hotel here stands out head and shoulders above the rest for families – the Alpenpark Family Resort & Spa, which has a bowling alley,  table tennis,  play room, pool and zappy watery play area which your water babies are going to love. 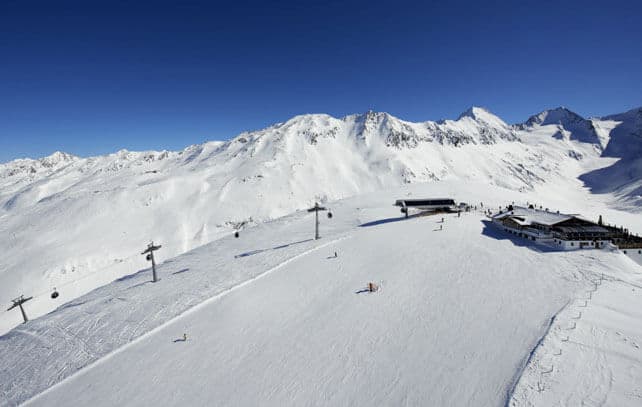 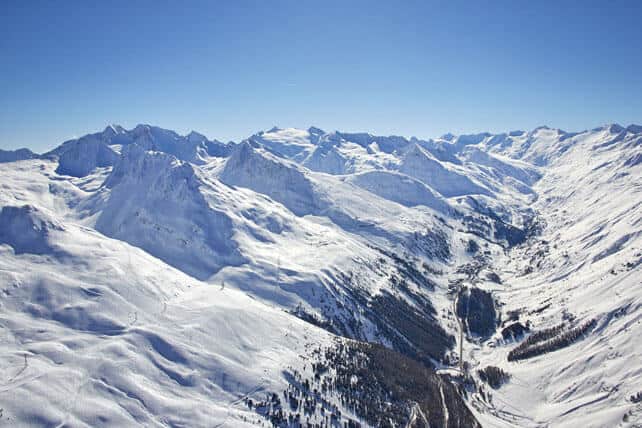 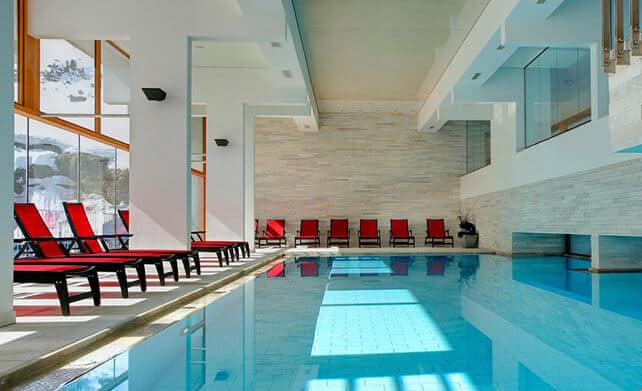 (Which is handy when the clouds come down)

And a specialist family-skiing tour operator 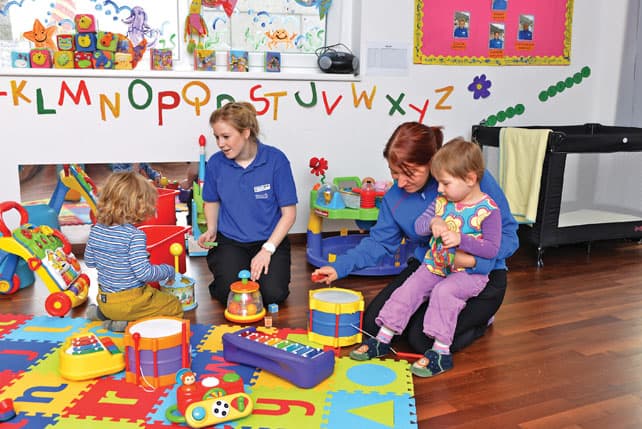 Obergurgl has long been a favourite with British families, and it’s not hard to see why. Set at the southern end of the Otztal, close to the Italian border, this is a high, purpose-built resort – but one which offers a cosier, more Austrian take on hospitality than its rivals in France and Italy. Yes, okay, there’s not as much skiing on offer here as in the likes of Tignes or Val Thorens. Obergugl’s 110km of pistes is modest compared to the 300km of the Espace Killy and the 600km of the Three Valleys. But that’s a price many parents are prepared to pay in return for the big smiles and attention to detail you’ll find in many of its hotels.

And besides, as many parents will tell you, there isn’t time on family skiing holidays to do justice to one of the really big lift systems. What matters more is the quality of the snow: and with all the pistes set between 1800 and 3000m that’s rarely a problem, even at Easter.

Are there any drawbacks? Well the obvious one is visibility. Nearly all the skiing is above the treeline: and on a sunny day the scenery is magnificent. But when its’s snowing hard or the clouds come down you won’t be able to see a thing.. It’s a good job so many of the hotels have good pools: they’re the perfect place to retreat to when the weather’s bad.

Another challenge is the fact that ski school lasts from 9.45-12pm and 1.30-3.30pm daily – which is a long day of lessons for a small child. We think it suits families with kids aged six or seven and up as a result. You may also want to book a four-day course instead of a five day one for your little’uns, so you get some proper slope time together as a family on days five and six of the trip.

Many of the hotels offer their own kids clubs and creches, by the way: and if you travel in the school holidays, you’re almost certain to find other English-speaking children in them. But if you’re looking for a complete Anglophone environment – as well as the relaxed, chatty atmosphere of the chalet – then Esprit is for you. This well-run, family-friendly tour operator offers comprehensive childcare in its two chalets as well as exclusive ski school classes for the children of its guests. (Sadly, neither chalet has its own pool, but there’s a public one in the neighbouring resort of Solden, a 20-minute ride away by bus.)

One final advantage: in Obergurgl, lift passes for the under-nines are free. In most resorts, free skiing is only available for the under fives or under sixes. 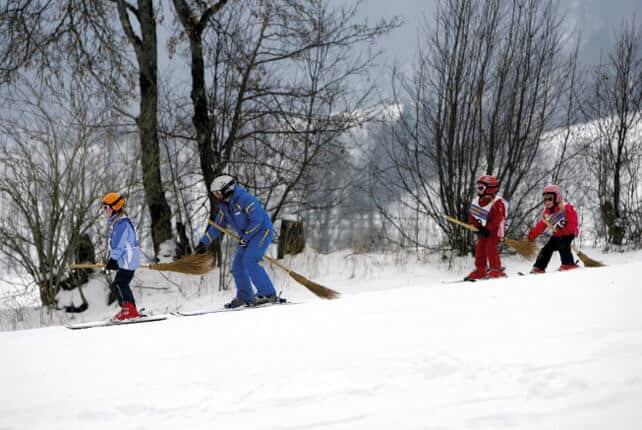 …at the top, as well as the bottom

Some underrated pistes for the grown-ups 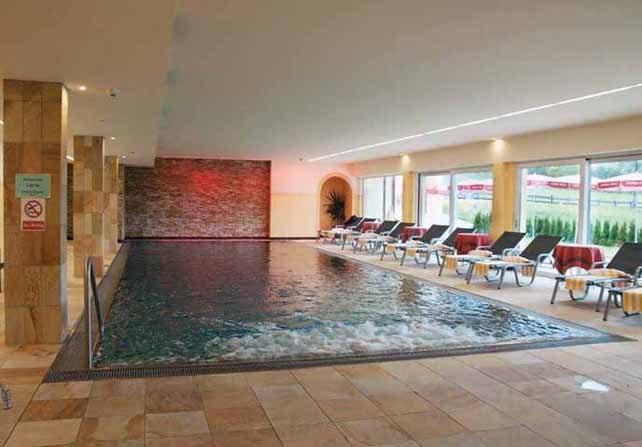 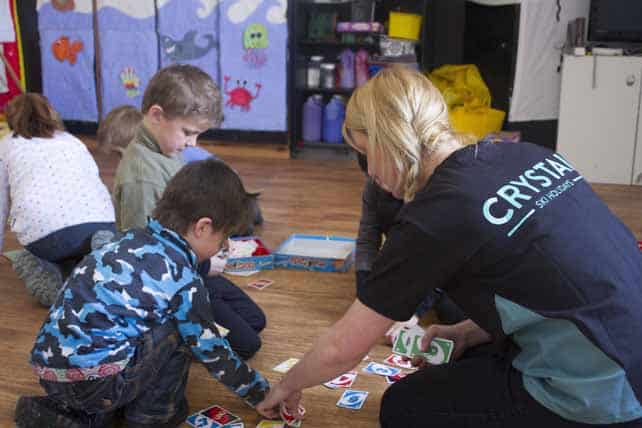 Experienced skiers will turn their noses up at Niederau. It’s too low and too small, they’ll tell you. They’ll say that if you get stuck into the new Ski Juwel ski area (of which Niederau is a part) you should stay in nearby Auffach, or even Alpbach, where you’ll find the lion’s share of the pistes.

They’ve got a point. There are a couple of cracking descents locally – notably the former FIS-rated downhill, which plummets from the top of the Lanerkopfl back to the village, dropping through 800 vertical metres in the process. But there are only two of ‘em. It’s not exactly Val d’Isere Mark II.

But don’t let that put you off. For families just starting out on their skiing careers, Niederau is another story. Its beginner pistes are set in the shadow of a north-facing slope and hold their snow well during the mid-winter months (ie until late February). They’re also long, gentle, evenly-pitched and rarely crowded – and are served by one of the nicest groups of ski instructors you’ll find in the Alps. Many are Dutch, a few are English, and all are well-versed in putting British beginners through their paces – especially children. At the Aktiv ski school, Tuesdays is Harry Potter day – when they can ski with magic cloaks or witches’ brooms.

English-speaking childcare is also on offer in the village, courtesy of British tour operator Crystal, which runs its own nursery for the under-fives in the Hotel Harfenwirt. This roomy, friendly four-star is blessed with its own pool, and is also just across the (quiet) road from the nearest nursery slope. Over February half-term a family of four can stay here for around 60% of the cost of a British-run chalet-hotel in one of the high-altitude resorts of France.

So – don’t come to Niederau if you’re looking for A-list glamour, or if you’re in the market for never-ending pistes or powder. But if you find the kissy-kissy, fur-trimmed atmosphere of Verbier, Courchevel et al off-putting, and you don’t want to spend a bomb on your first family holiday, then put it high on your hit list. 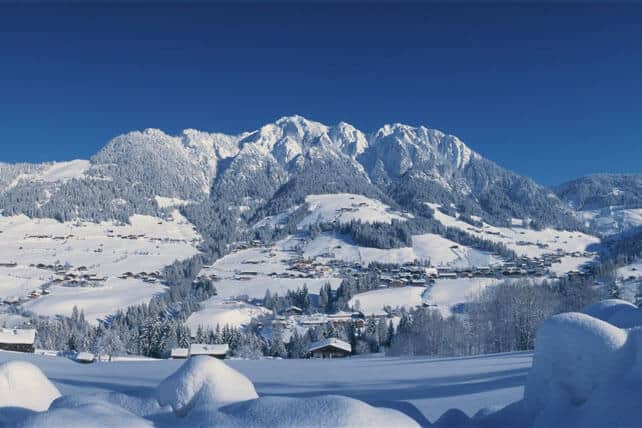 With lots of intermediate-friendly pistes 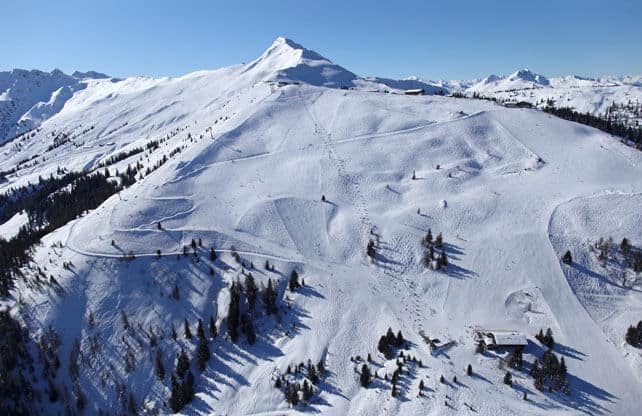 And a bigger vertical drop than you’d imagine 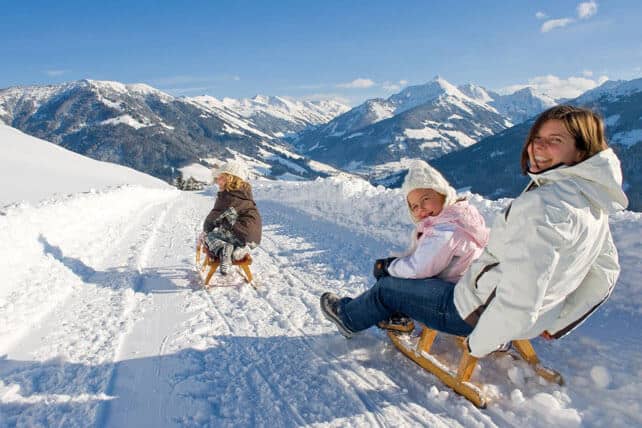 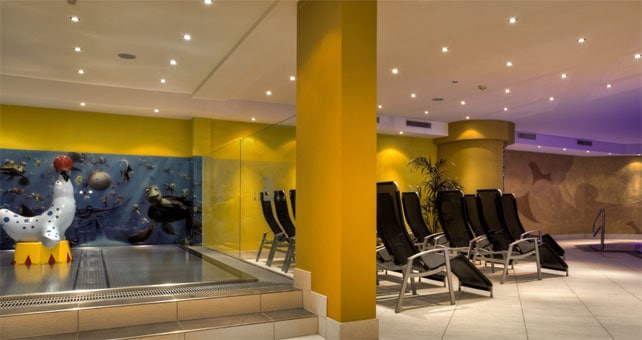 With its own beginners’ ski area… 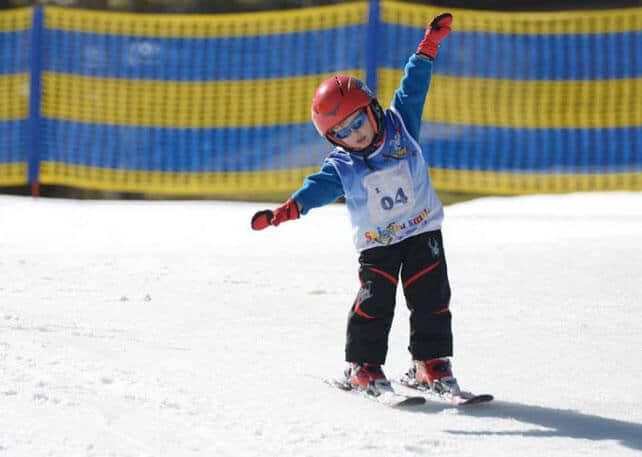 …right on the doorstep 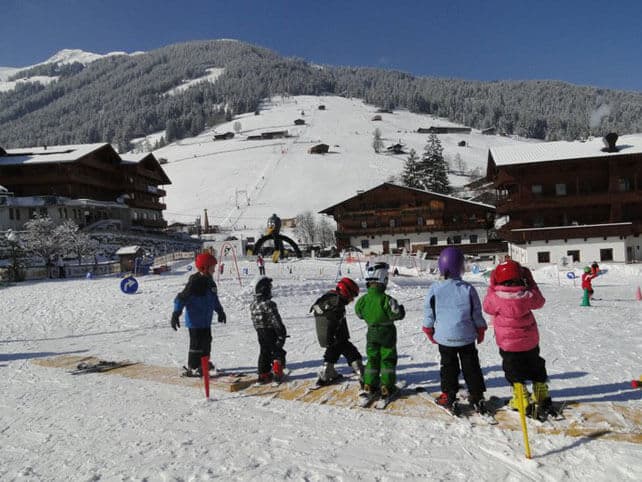 And BIG family rooms within

Don’t fancy the rattle and hum of a great big clanking ski resort? Then little Inneralpbach is for you. It’s set at top end of one of the Austria’s prettiest Alpine valleys, and whilst its neighbour, Alpbach, garners all the praise, it’s at Inneralpbach that you’ll find the warmest welcome for families.

You can thank the Hotel Galtenberg for that. A member of the Kinder Hotels group, its stock-in-trade is making family ski holidays easy. So, not only does it offer a range of super-sized family bedrooms and suites, there’s a paddling pool, a swimming pool, a soft-play area, and 60 hours of free child care included in the price of accommodation. Oh yes, and the hotel’s own nursery slope for first-time skiers is just outside the hotel. Yes, okay, German is the first language spoken here: but English is the second, and the last time Welove2ski dropped by for an inspection, a British family was just about to check in.

Grown-ups will like the location too – because Inneralpbach is the biggest winner in the recent union between the pistes of the Alpbachtal and the Wildschonau, to create the Ski Juwel ski area. You can catch gondolas in both directions here, meaning the best skiing in both valleys is on your doorstep. Admittedly, the area is too low for Easter skiing: the highest lift tops out at 2025m. But mid-winter, it’s a treat.

St Anton: okay, so not every slope will suit your kids… But there’s an excellent beginner’s area at Nasserein 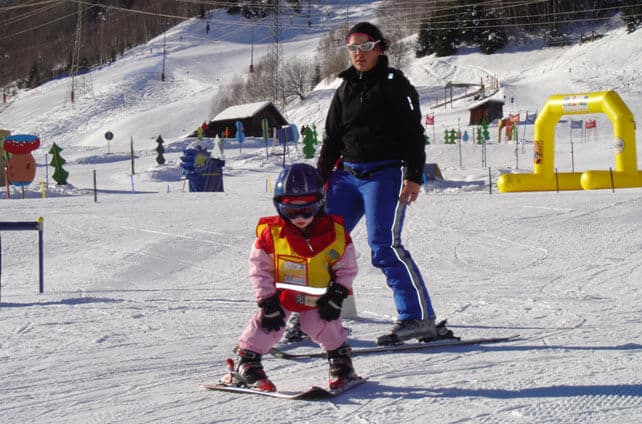 As well as two chalet-hotels run by family specialists 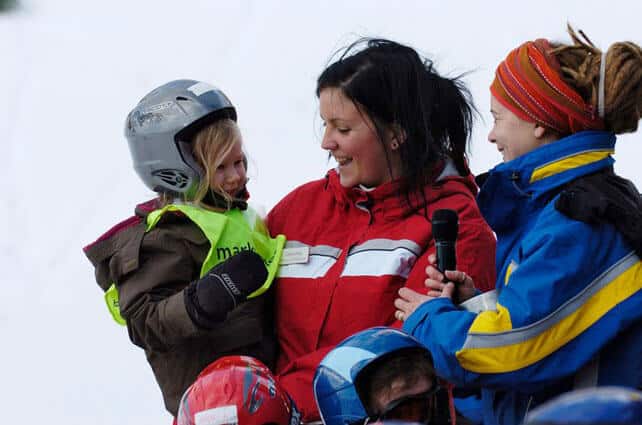 And, for parents who still want to ski hard – OH MY… A resort famous for its off-piste skiing and wigged-out nightlife is not an obvious place to bring children for a holiday. But St Anton makes a lot more sense when you shift your gaze from the centre of town to the suburb of Nasserein. Here, the atmosphere is far more serene and family-friendly, and there’s an excellent area of nursery slopes just beyond the main gondola. Both Esprit and Mark Warner have chalet-hotels here too – offering comprehensive English-speaking child care and kids’ clubs for little’uns aged three months and up.

Of course, that doesn’t change the essential character of St Anton’s ski area, which is best tackled by those with good technique, strong legs and the budget for an off-piste guide (or, at the very least some powder-skiing lessons). Beginner or intermediate parents should steer well clear. But if you’ve been skiing all your life, and don’t want to stop now that you’ve got a family, St Anton could well be the answer to your prayers.