More Crazy Weather in the Alps: Followed by Calm 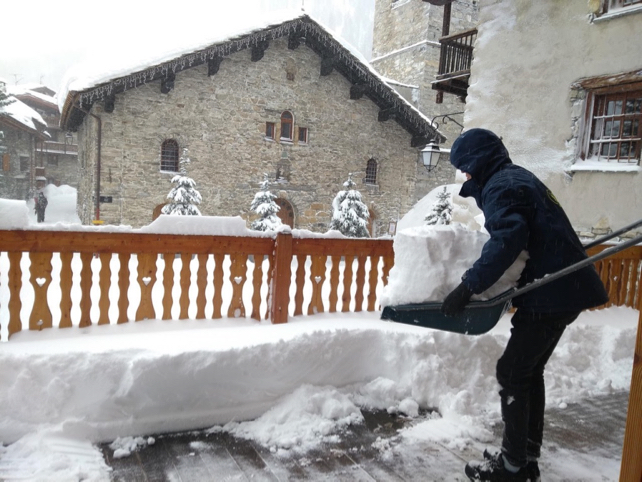 The clear-up begins. the Val d’Isere this morning. Photo: the yseski.co.uk

Flippin’ eck, Snowfiends. The Alps are in the middle of another bout of crazy weather.

As you’ve no doubt heard, there’s been another powerful snowstorm over the northern half of the region – and it’s dumped nearly metre of the white stuff in many resorts.

As a result, the avalanche risk is up to 4/5 across most of the French Alps, and in parts of Switzerland and the Austrian Tirol too. For the time being, off-piste skiing is out of the question in many resorts.

At altitude, howling gales have been a feature of the recent weather too. Lift closures have been commonplace.

At least it’s been chilly. After last week’s unseasonably mild temperatures (which saw rain above 2000m for a time), this weekend’s storm was a cold one – and the snow fell down below 1000m. But at that level it’s very thin: often, just a cosmetic 5cm coating away from the prepared pistes. Compare that with the 250cm packed down on the higher pistes of Val d’Isere and Tignes in France, and 195cm above Obergurgl in the Tirol. The contrast between the snowpack at low and high altitudes has rarely been so marked.

The next spell of madness begins tomorrow, when rain returns to the slopes. MeteoFrance’s avalanche service is predicting that the freezing point will rise to 2500m tomorrow, which will make the snow even less stable. Plenty of spontaneous avalanches are predicted: so please pay close attention to local warnings, and don’t ski off-piste without a guide.

Finally, it looks as though the weather will calm down on Wednesday, with some very welcome sunshine and light winds. According to Swiss forecasters Meteoblue, there’ll be light to moderate snowfall over the northern Alps on Friday, with more settled weather to come after that. It’s going to be fairly mild too.

So aim high, if you’re planning a last-minute trip. And, in the meantime, have a very merry Christmas! 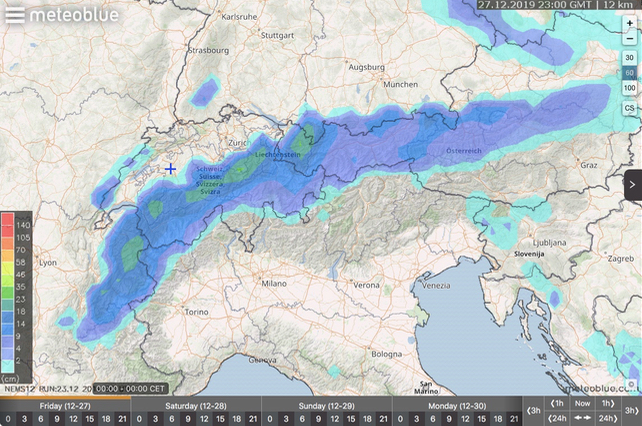 No Responses to “More Crazy Weather in the Alps: Followed by Calm”