First of Two Snowstorms Rolls Across the Northern Alps 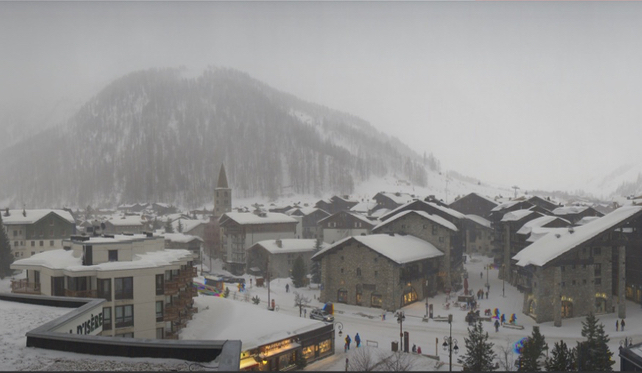 The French resort of Val d’Isere this afternoon. Photo: valdisere.com

The northern Alps are in the midst of a busy week of weather. It’s snowing as I write this – and 10-30cm of the white is expected in most resorts by tomorrow morning. It’s chilly too, with the snow settling down to 1000m (and lower in the east).

Then, after a brief pause, a second front is due to cross the region on Thursday. Once again the snow will eventually settle down to 1000m, with 10-20cm the norm.

Of course, this is good news for piste-skiers in France, Switzerland and Austria in the run-up to February half-term, which kicks off on Saturday. Off-piste, however, conditions are going to be very variable, thanks to the spells of rain that preceded the current dump, as well as the sometimes storm-force winds that are scouring exposed slopes.

Expect the avalanche risk to be considerable for a time, too. Local avalanche-warning services are reporting layers of poorly-bonded wind-packed snow in the back-country. If you are planning to hunt powder, you’ll need to hire a guide to find snow that’s both soft and safe.

Here’s how it looked this afternoon in the Skiwelt in the Austrian Tirol, as the snowfall settled in. 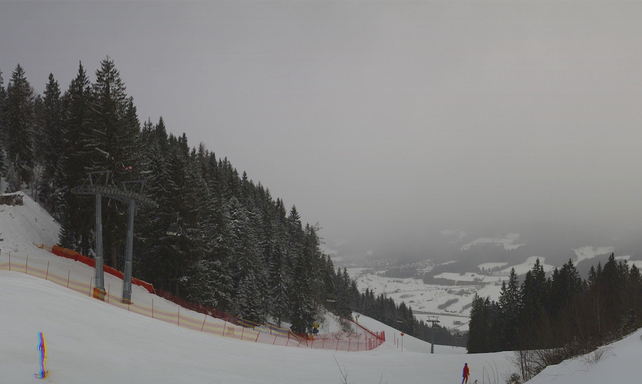 And here’s Meteoblue’s snow forecast for the 24 hours to 1am tomorrow. 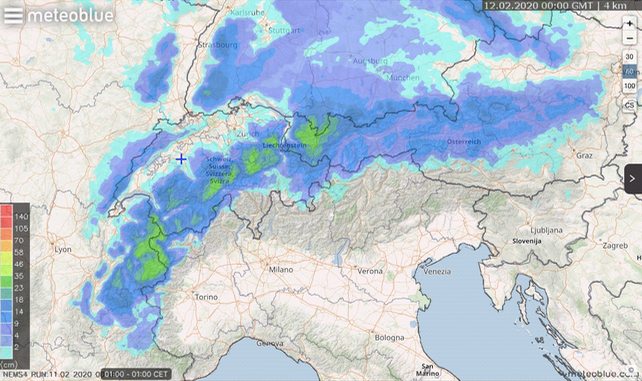 By way of contrast, here’s how it was looking in the Italian Dolomites late this afternoon, above Canazei, on the southern side of the main Alpine ridge. 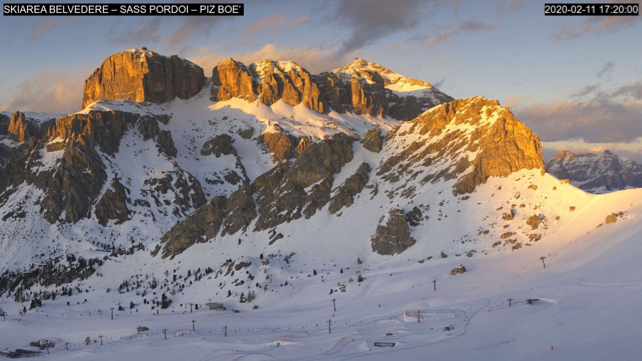 Lovely sunset: but there hasn’t been any fresh snow here since January 28. The snow-making system here is one of the world’s best. But still, some help from Mother Nature wouldn’t go amiss.

The outlook, by the way, is for a big change on Friday. It’s expected that skies will clear, winds drop, and temperatures jump. That sounds lovely, but with the daytime freezing point at 2800m, it does also mean that the fresh snow will start to melt on lower slopes, and then refreeze overnight. So hard-packed pistes could be an issue at the beginning of the big holiday week. If that is the case, skiers should pick easier pistes than they usually ski till they get the hang of the harder surface.