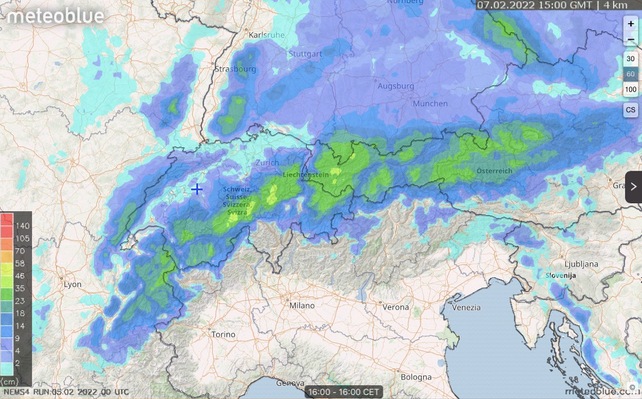 Meteoblue’s 24-hour snow forecast for the Alps to 4pm on Monday. Image: meteoblue.com

Hang on to your bobble hats, everyone. Here comes Mother Nature with another weather front, ready to add to the snow she deposited on the the northern Alps last week.

It’s due to start snowing tomorrow afternoon (Sunday), and over the following 24 hours the storm will drop 25-50cm across much of the northern Alps. The snow is likely to clear on Monday tonight.

At resort level, St Anton is expecting 25-40cm of snow, Andermatt 22-35cm, Val d’Isère 12-25cm and San Cassiano in the Italian Dolomites 5-10cm. There’s likely to be more in each of these resorts at altitude.

Meanwhile, in the French Alps there was about 12cm of snow on Tuesday. The Italian Dolomites had a dusting too: 5cm-10cm was the norm. 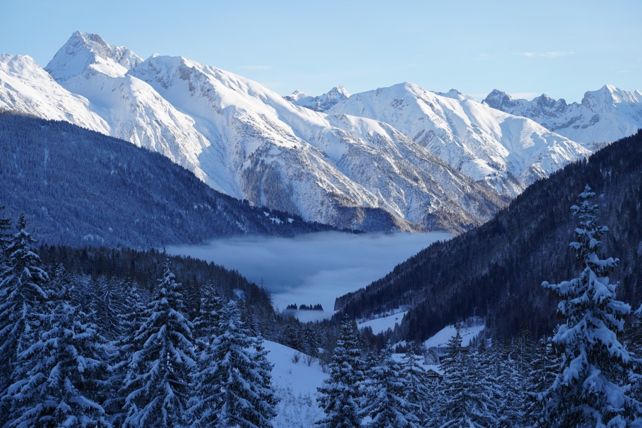 Another, weaker weather front will cross the region on Friday, but before that there’ll be a short, mild spell of sunny weather, starting on Tuesday. Annoyingly, the daytime freezing point will reach 3000m in the west, which is higher than the top lift in many resorts. So expect south-facing off-piste slopes to turn a little heavy and then crusty as result of the daily thaw-freeze cycle.

So, as half-term approaches the Austria and eastern Switzerland are continuing their remarkable run of snowy weather, and on piste the cover is thick and even. Expect the coming thaw to mess a little with the quality of the off-piste skiing on lower slopes: and be very cautious about the avalanche risk. There have been several fatal accidents in recent days.

In France, snow depths are – according to MeteoFrance’s avalanche service – “correct” for the time of year, on north-facing slopes at least. But the quality off-piste is patchy and properly cold, fluffy powder is rare.

Meanwhile, across much of Italy the cover’s currently too thin for off-piste skiing, although the pistes are in good condition, thanks to exceptional snow-making systems in many resorts.

No Responses to “Here Comes Another Snowstorm”