All Quiet in the Alps, Before Another Big Storm

The Alps have had a reprieve. After some of the wildest weather anyone can remember – and, in places, some of the heaviest snow – the skies have cleared, the snowpack has begun to settle, and ski patrollers have been able to do their blasting to secure the pistes, and make safe the roads.

Skiers have been having a high old time, too. Two of our editors, Peter and Felice Hardy, have been in Val d’Isere and Tignes over the last couple of days, and have been enjoying some fantastic skiing under clear blue skies. Here’s how it looked on the pistes down to Tignes-les-Brevieres earlier today. 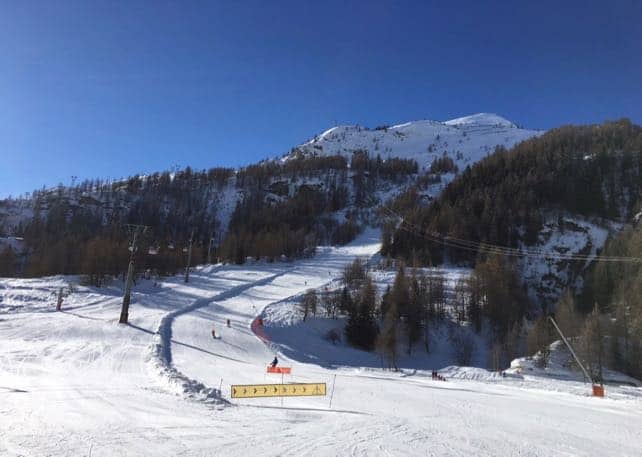 As you’ll know, Val d’Isere was near the eye of the extraordinary Retour d’Est storm of January 7-9 – which dropped two metres of snow on the resort in 48hrs (and even more in Bonneval-sur-Arc on the other side of the Col de l’Iseran, as well as parts of Piedmont in Italy). For the second time in a week the resort was in lockdown as roads were closed, and skiers told to stay indoors. What’s more, Meteo France declared a Red Avalanche Alert on Monday afternoon for parts of Savoie. On average that happens only once every 30 years.

Incredibly – given the dangerous situation on Monday – Peter and Felice were able to ski off-piste on Friday in the company of a guide. Even more surprising is the fact that across the French Alps the avalanche risk is now moderate to low: 1/5 today across much of the Three Valleys and Paradiski and only 2/5 across the Val d’Isere-Tignes. It’s also 2/5 in Chamonix, across the much of Switzerland and into the Austrian Tirol.

But let’s not forget that, mixed in with headline-grabbing snow and high winds, the last two weeks have also seen plenty of rain and high temperatures. On many slopes the snowpack got thoroughly wet, before refreezing; and now it’s solid. So, in the short term, if you’re expecting bottomless powder everywhere, think again. In the Three Valleys area, Météo France’s avalanche reporters describe a layer of powder on top of ‘concrete’, and in Chamonix, where I’m headed on Monday, they’re talking about snow that is either hard or wind-blown: only a few slopes are still powdery. I hope my guide on Monday knows where those are…

(And no wonder the snow is windblown, on the Grands Montets it was blowing at 220km/h during Storm Eleanor.)

Here’s how the Mont Blanc massif looked this afternoon. 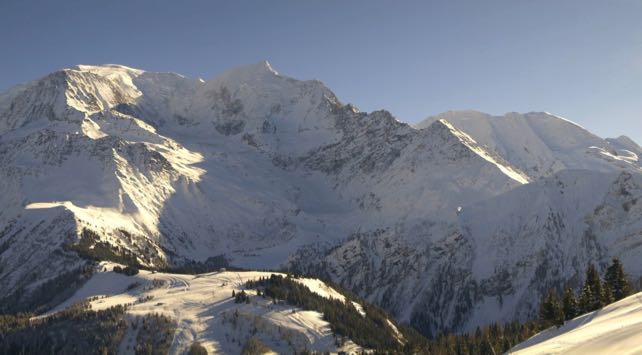 Meanwhile, in the Austrian Tirol, the excellent avalanche service blog says ‘the snowpack above 2200 m shows pronounced effects of wind; below that altitude, of rain and warmth’. So the chances of skiing powder are fairly slim. At lower altitudes you’re actually more likely to enjoy spring conditions, because of the 24 hour cycle of melting and refreezing.

These stable conditions won’t last for long, because another storm is on the way. The clear weather will last until Monday afternoon, and then it will start to cloud over from the west. Several days of snow are in the forecast, starting in the French Alps and Italy’s Aosta Valley, before spreading across Switzerland and Austria. To begin with, it’ll be raining at village level in many resorts, but the freezing point should drop on Wednesday, and a significant dump is on the cards… 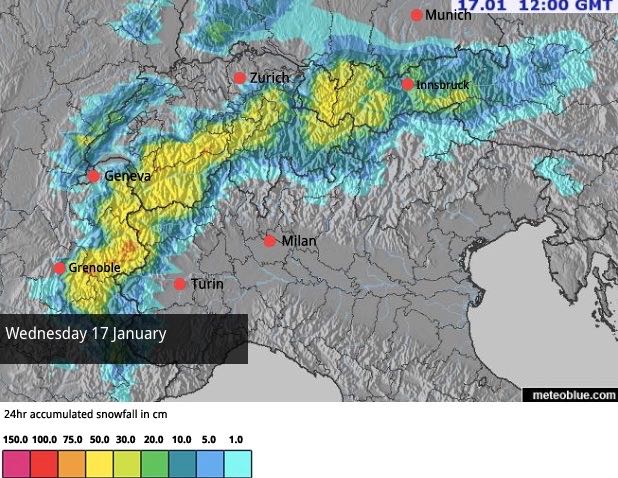 Welove2ski’s snow forecast for the Alps for January 17.

According the the UK’s Met Office chart for Friday, it’ll get significantly colder, too. 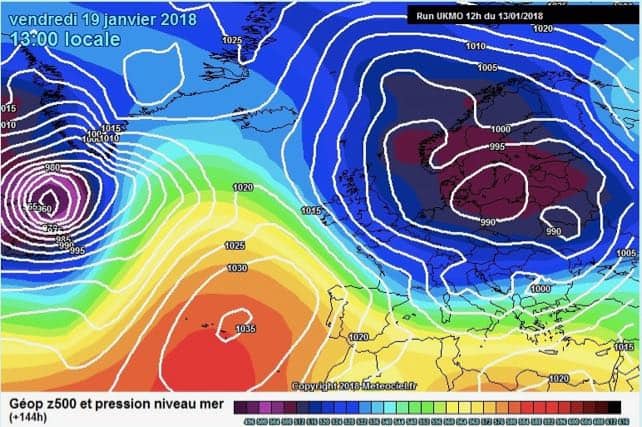 Pretty extraordinary, huh? In the western Alps, above 1800m the snowpack is already close to record depths for the time of year. Further east, they’re pretty good too, although the snowfall over the last fortnight hasn’t been as heavy in the west. In St Anton, for example, snow depths are 80-230cm deep, and in the Skiwelt 45-120cm.

Here’s how it looked above Soll this afternoon. 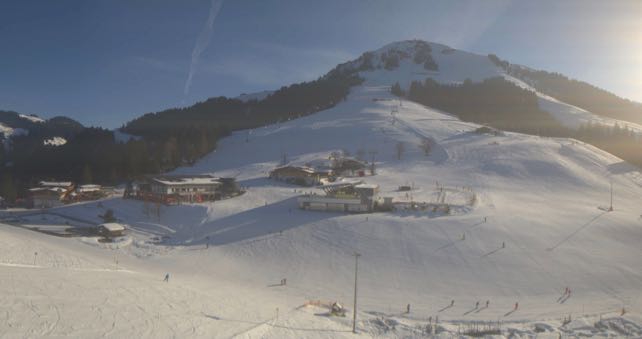 Across Italy the slopes are in good shape too, thanks to the snow on Monday night and Tuesday. In Cervinia, the cover is 90-310cm deep, and in Canazei in the Dolomites it’s 50-245cm deep.

One Response to “All Quiet in the Alps, Before Another Big Storm”