Train or Plane to The Alps? The Pros and Cons On December 20 we tested the difference between travelling to Val d’Isere in the French Alps by air and getting there by rail.

It was never going to be a race of train versus plane because the much quicker, direct train service from St Pancras to Bourg-St-Maurice or the convenient service via Lyon weren’t available options. The rail travellers planned to change trains in both Paris and Chambery. Quality and overall comfort and convenience, rather than just speed, were the factors to consider.

To compound any complications and inject a fair dose of jetlag the rail passengers, Peter and Felice, started their journey (by air) from Jackson Hole in Wyoming and travelled via New York’s JFK and Heathrow before continuing directly onto to St Pancras.

Peter and Felice: The key question for us – one that the success of our Christmas ski holiday depended upon – was “Will not only we, but also our hold bags, make the tight 40-minute changeover to a different terminal at JFK?”

The answer was a Western-style “Yee-ha!” that echoed across the baggage hall in Terminal 3 at breakfast time. We hit the Heathrow Express running. No wait for a taxi at Paddington. Now for St Pancras and the chance for a couple of hours of shut-eye before the journey across Paris.

Check-in at the London station was at 11.45am, a convenient 30 minutes before departure. Time even to buy a picnic lunch at M&S and even a spot of last-minute Christmas shopping. Can you buy crackers at St P? Yes, you can…in Paperchase!

We’re first through security and then it’s a short queue to negotiate passport control. But a much longer (as it turned out) period standing in a heavily-crowded waiting area for the train.

Our Eurostar train was to have departed at 12.24 and, just as we were getting ready to board, we were told there was a delay but were given no reason why. Jetlag suddenly kicked in like a bull in a rodeo. Help, we’re going to miss our pre-booked taxi across Paris, along with next two trains! 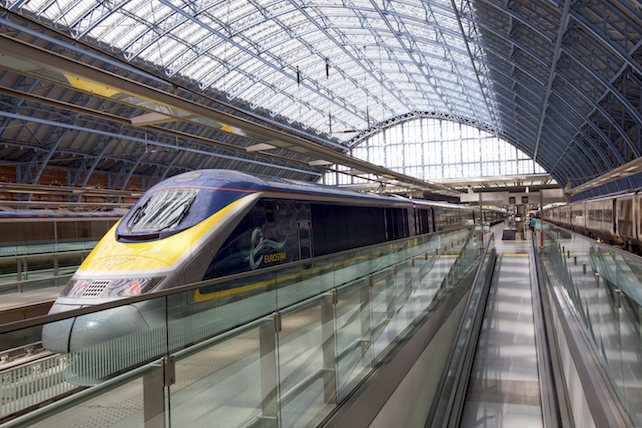 We had our tickets endorsed at the Information desk, but it was the Sunday before Christmas. Would there be any space on a later train to the Alps? Incredibly, no-one knew, because SNCF runs no customer service at weekends. It seems that the French 33-hour working week may be wonderfully beneficial for the working – but not the travelling – man or woman. We just had to wait.

Finally we departed 90 minutes behind schedule and arrived at Paris Gard du Nord at 17.15. It’s worth noting that the London-to-Paris Eurostar still has no Wifi and we wonder why. To be bereft of digital communication when drifting through the Kent and Pas de Calais countryside was distinctly unimpressive when you consider that whilst flying with Delta we could send and receive emails with ease whilst at 35,000ft mid-Atlantic.

But our rebooked taxi was waiting. Expertly the driver weaved his way through the heavy Sunday evening traffic to Gare de Lyon (55€ – about £40 – including luggage and a pre-booking option). We arrived at the station at 18.00.

As we had no seats booked for this alternative train we had head to the Information desk to be told to go to the platform and wait for the guard to tell us which seats would be available. Fortunately there was space to spare, so no problems there. Departed Paris at 18.43pm on a comfortable TGV train, with enough room to spread out and our luggage in the corridor luggage racks.

At Mâcon – we could have done with a glass of the wine at this stage – the train halted because of a technical problem. Jetlag kicked in deeper but, after a 15-minute delay, the problem was solved and we were on our way again.

We missed our onward connection to Bourg-St-Maurice, but “can-you-help?” pleas to Val d’Isere-based transfer company, Snow Drone, provided an unexpected solution: they were making a pick-up off a delayed flight from Geneva Airport. Could we wait 15 minutes and the driver would divert to Chambery?

Finally, we pulled into Val at 00.30am after a journey of 28 hours – but if we’d set off from central London rather than Wyoming, call it 13 hours door-to-door.

Even with unexpected delays, not bad. Max and Izzi: Left home in Winchester at 11.30am and arrived at Southampton Airport at 11.45am, just as our parents were checking in at St Pancras. There was no stress in this small and friendly airport. We went through customs and found seats in the departure lounge. The flight was to have taken off at 13.20, however it was delayed to 13.50 but the pilot managed to make up the time difference.

We arrived in Chambery Airport at 16.55, just as the others were coming into Paris, and set off on the Ski Total transfer (free drinks and snacks) from Chambery by 17.15. Traffic was not too bad and the weather fine, so we arrived without incident at the hotel at 19.30 – with plenty of time to unpack before dinner.

As we live less than 30 minutes’ drive from Southampton Airport, call it seven hours door-to-door. The Ski Train en route to the Alps. Photo: © Eurostar.

* Luggage is perhaps the biggest plus point. Because of our intercontinental journey, we arranged for our skis to be sent to France in advance. But we could have taken a ski bag – and any extra bags of any weight – with us. There’s no maximum luggage allowance, but the amount is dependent upon what you can carry – platform distances are long, it’s often hard to find a trolley, and storage space onboard is limited. Remember, on this particular route, you also have to transport your skis and bags across Paris.
* No limits on liquids. Remember the days when you could fly with your washbag in your hand luggage, along with a bottle of water?
* You know your luggage is going to arrive at your destination – because you are carrying it.
* Comfortable seats, even in standard class. The opportunity to walk up and down the train and visit the buffet carriage.
* A view of the passing countryside from the window makes the journey much more pleasant and bad weather is less likely to affect your journey time.
* More flexible rail departure times: while Max and Izzi left for home at the end of the holiday on a 6.30am airport transfer bus, we caught our train from Bourg-St-Maurice (45 minutes’ drive) at a more civilized 10.11am.
* Resort transfers can be shorter, although this depends on which resort you are going to.

* Having to load all your luggage – including awkward skis and heavy bags – on and off the waist-high X-ray machine at security.
* The too-small waiting area in London, and also at Gare du Nord.
* The sometimes poor maintenance: no running water in the WCs on two of our four trains – right from the start of the journey – and no sign of any onboard staff/guards for assistance on all four trains.
* General absence of information about delays, revised departures and arrival times. * Southampton is a small airport with easy and reasonably-priced parking just across the road, as well as an on-site mainline railway station. Obviously these details are different at Gatwick, Heathrow and other larger airports.
* Plenty of seating in the waiting area.

* Lack of decent shopping possibilities at Southampton Airport.
* Flights, especially in winter, can be delayed or cancelled by poor weather or fog.
* Airline security can take a lot longer than Eurostar’s, especially if flying from Gatwick or Heathrow – though less likely from Southampton.
* Airport transfers are weather-dependent and can be a nightmare in bad weather and heavy traffic. You pay your money and you take your choice. The train continues to be the more expensive option when compared with inclusive tour operator charter flights. However, overall, it’s usually a less stressful form of transport and you’re limiting your carbon footprint. Overall, it’s there’s something almost liberating (as old British Rail used to say) about letting the train take the strain.

Flight and transfer costs: The return transport element of a tour operator package works out at around £200pp (about 271€) return and £45pp (approximately 61€) return on a coach transfer, although tour operators won’t give you this amount of credit when not taking their flights and transfers.

Train fares: St Pancras to Bourg-St-Maurice starts at £111pp (about 150€) standard class return. For bookings visit Voyages-SNCF. A shared transfer with Snow Drone is about 75€ (£55) one way from a choice of Bourg-St-Maurice, Chambery or Moutiers. For further information on rail travel to the Alps go to Snowcarbon. Also see our feature on Ten Tips for a Successful Train Journey to the Alps.

2 Responses to “Train or Plane to The Alps? The Pros and Cons”