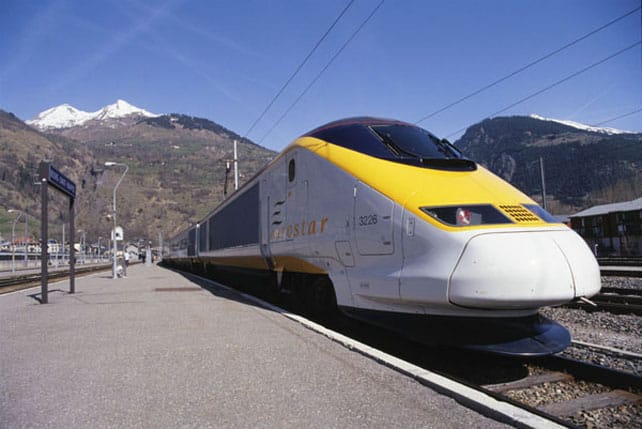 Tickets for Eurostar’s ski trains go on sale tomorrow at 8am, with return fares starting from £150. You can book direct on eurostar.com or by calling 03432 186 186.

There are two regular services each week, whisking skiers from London St Pancras and Ashford International direct to Moutiers, Aime La Plagne or Bourg-St-Maurice in the French Alps (although the return service doesn’t stop at Aime La Plagne).

There’s no need to change trains in Paris or Lille, and once you’ve alighted in the French Alps a whole host of resorts are within easy reach: Courchevel, La Tania, Meribel, St Martin de Belleville, Les Menuires, Val Thorens, Valmorel, La Plagne, Les Arcs, La Rosiere, Ste Foy, Tignes and Val d’Isere. Most people use taxis or minibus shuttle services for the final leg of the journey, although there is a funicular railway connecting Bourg-St-Maurice with Les Arcs.

Here’s the timetable. Note the extra train laid on for two February half term weeks in 2018 – although the outbound journey is overnight. 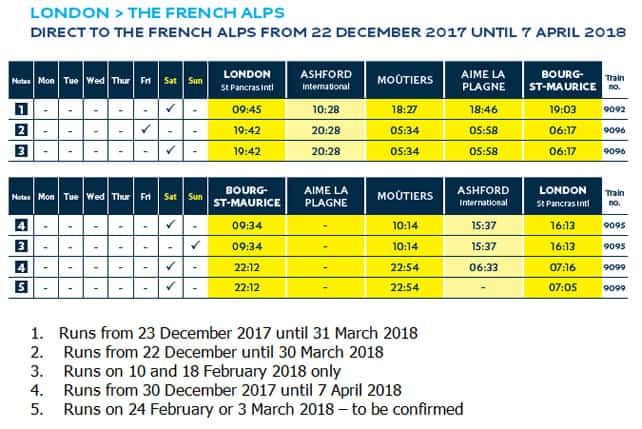 Of the two regular services, the daytime train is by far the most pleasurable, and takes just over eight hours. For anyone based in the London area, it is – in our experience – the most comfortable way get to the ski resorts of the Tarentaise. However, it does usually cost more than the overnight service, which does not have sleeper cabins.

The one advantage of the overnight service – aside from the price – is that it gives you two extra days on the slopes, as you arrive first thing on Saturday morning, and depart on Saturday night. Because of the lack of flat beds, we wouldn’t recommend it for families with young children.

The daytime service for the key school-holiday weeks will sell out quickly – especially February half term. In London and the South East, this will run from February 10-17. So be ready to book at 8am tomorrow. The week of Easter (March 31- April 7) is likely to be popular too, as well as Christmas and New Year weeks.

Bear in mind that Eurostar’s services to the Alps aren’t the only skier-friendly trains: the SNCF also runs services from Paris, Lille and Lyon to the Alps, which connect with regular Eurostar services – with the Lyon route the most hassle-free. However, tickets for SNCF services – as opposed to Eurostar’s trains – don’t go on sale until the autumn.

No Responses to “Eurostar Ski Train Tickets on Sale Tomorrow”