Get on Track: Skiers Demand a Sunday Ski-Train 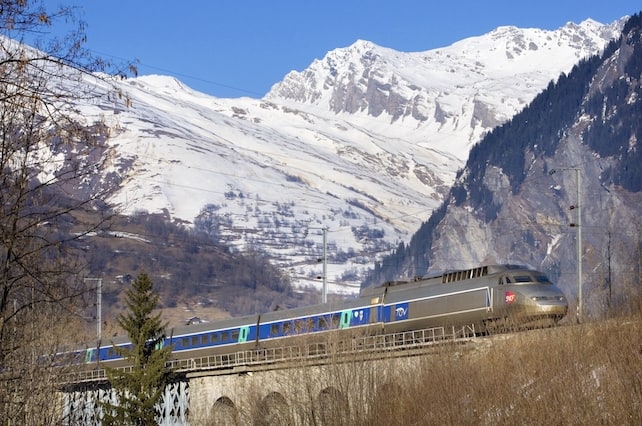 The direct daytime Eurostar Ski Train, which runs every Saturday from London to the Tarentaise region of France, is now so popular during February half term that it sells out within hours of going on sale. So why is there no Sunday Ski Train?

With nearly 40% of ski holidays now operating a Sunday changeover, a petition has been launched to encourage Eurostar to introduce a Sunday Ski Train, backed by support from the ski industry.

“Back in the 1990s, when Eurostar launched the Ski Train, almost all ski holidays were Saturday to Saturday,” says James Box of ski specialist travel agency Iglu. “But since then the ski-holiday market has shifted dramatically.”

According to research by Iglu, the ratio last season was 63% Saturday vs 37% Sunday. “Every season, more than 800,000 skiers head to the Alps from the UK,” says Box. “Many live in the South East, while others travel from all over the country to London or Ashford, just to take the Ski Train. That’s a large potential market for Eurostar to get a slice of.”

“Rail travel is a fantastic way for skiers to make the journey part of the holiday,” says Daniel Elkan, founder of rail-ski information guide, Snowcarbon, who created the petition with Graham MacMahon of Snowheads. “A Sunday Ski Train would spare thousands of skiers airport queues, cramped flights, and tedious transfers. It’s a long, polluting conveyor belt of boredom. We need more rail alternatives.”

Currently, skiers wanting to travel on Sundays to ski resorts like Les Arcs, La Plagne, Meribel and Val d’Isere have to take the Eurostar to Paris and then change station to take a TGV train.

“Skiers whose holidays start on a Sunday can still reach ski resorts by rail,” Elkan says. “But no direct option? It’s the equivalent of keeping supermarkets closed on Sundays.”

VIP Ski is one of many tour operators that offer chalets on a Sunday to Sunday changeover. “Many tour operators would love to offer guests a direct rail-travel option,” says sales and marketing director Gareth Crump. “There’s no doubt it would be a popular choice, especially if sold as part of a ski package.”

With rail access an important factor in the destination choice of many skiers, ski resorts stand to benefit, too. “We would love to be able to welcome more skiers by train,” says Xavier Feuillant, La Plagne’s Director of Tourism. “From a sustainability point of view, rail travel is important for the Alps because if you measure the carbon footprint of a ski resort, the majority of the emissions are the result of transport of holidaymakers to the resort.” 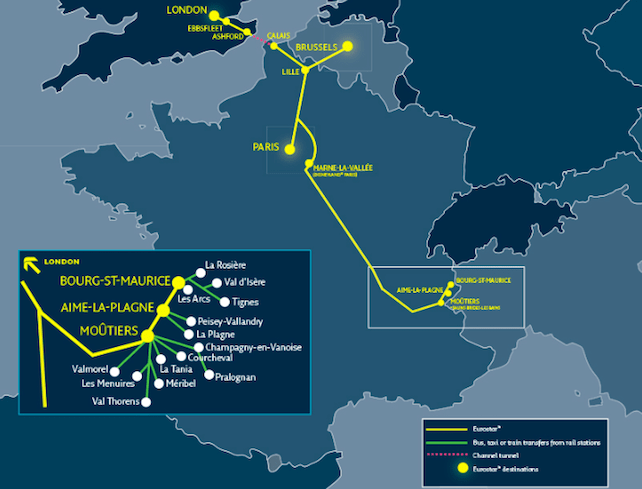 Ironically, although the Tarentaise is one of the easiest ski regions to travel to the UK from on a Saturday, it’s one of the most difficult on a Sunday. On Sundays you can reach resorts like Alpe d’Huez, La Clusaz, Montgenevre, Serre Chevalier, Sauze d’Oulx, Sestriere and Val Cenis with only one change of train (in Paris); but for Tarentaise resorts, travelling on a Sunday, you have to change in Paris and then at Chambery too. This is because the Eurostar leaves London on a Sunday morning too late to connect with the direct TGVs from Paris to the Tarentaise.

An alternative, therefore is to head out to Paris on a Saturday afternoon or evening, have a good Parisien meal and maybe visit the city, and then next morning take one of the many Sunday morning TGVs bound for the Alps.

“I hope that this petition will help to change the status quo,” Elkan says. “After 20 years of a Saturday Ski Train – it’s high time for a Sunday one, too.”

One Response to “Get on Track: Skiers Demand a Sunday Ski-Train”