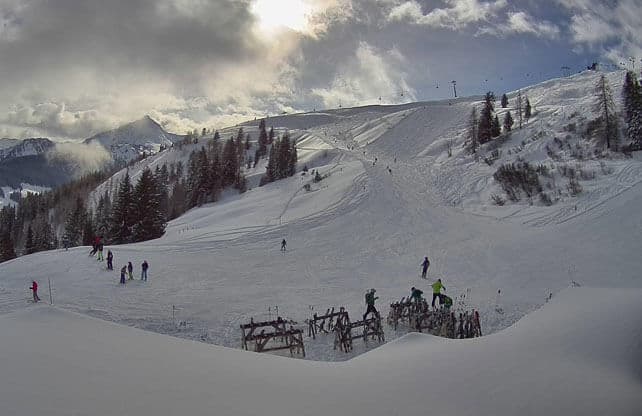 It’s hard to keep up with the weather in the Alps at the moment. Monday saw ridiculously high temperatures for February 1, which were followed by a sudden burst of cold, accompanied by moderate to heavy snowfall across the northern Alps. Parts of the Arlberg in Austria have seen a metre of fresh snow in the last week. Several areas in Switzerland have had 60cm in the last three days.

Generally-speaking, the avalanche risk is considerable, at 3/5, although there are local variations. This morning, the risk in the Engadin valley, around St Moritz, is at 4/5, even though the snow hasn’t been especially heavy there.

Now, the skies are clearing from the west, and temperatures are climbing rapidly. This afternoon in the French Alps, for example, the freezing point is expected to hit 2700m. It’s going to be rather spring-like, in fact; with skiers racing to enjoy as much of the new snow as possible before the sunshine and mild air make it wet and heavy.

The sun should persist tomorrow, but temperatures will be dropping back slightly, before things get interesting on Sunday. There’s a period of turbulent weather on the way, although the forecasts aren’t in agreement yet about how it’ll work out. There will be heavy snow in places, but temperatures are likely to yo-yo about and there’s a good chance of rain in low-lying resorts.

One striking feature of the this stormy spell is that the Italian Alps could finally see there first heavy snowfall of the season. Regular followers of the snow report will know that the snow-making crews in many Italian resorts have created very good on-piste cover with their snow-cannons. But all the same, they’d love to have a bit of help from Mother Nature – and the freeride and ski-touring communities will heave a huge sigh of relief, too.

Welove2ski’s current snow forecast for Sunday looks promising for the eastern and central resorts in Italy. And Monday’s forecast looks good for the Dolomites. 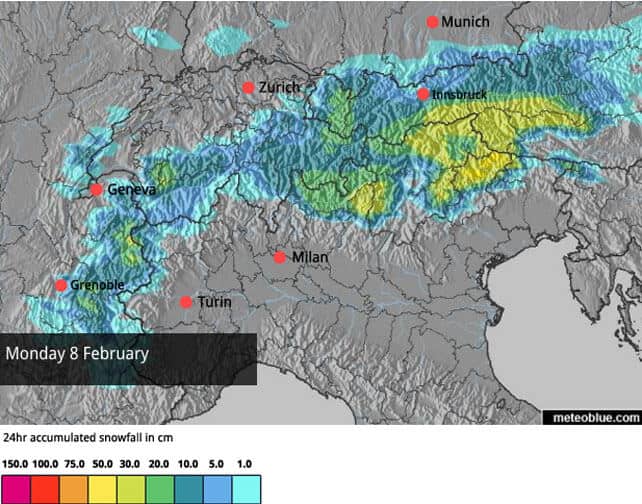 The latest snow map for Monday.

Let’s hope they stay that way!

I also like the look of the current forecast for Wednesday from the European Centre for Mid-Range Weather Forecasts, shown on Meteociel. But it’s too soon to be sure it’ll come to pass.

Generally speaking, the Alps will be on the frontline between a mass of cold air, and much warmer temperatures in the south, and marginal adjustments to weather patterns will produce quite sharp and sudden changes.

Still, the higher resorts should have plenty of new snow on their slopes in time for February half term.

Right, onto the morning’s webcams, starting with Soll in the Skiwelt which had 20cm of snow overnight, and has settled cover 55-60cm deep, on-piste. 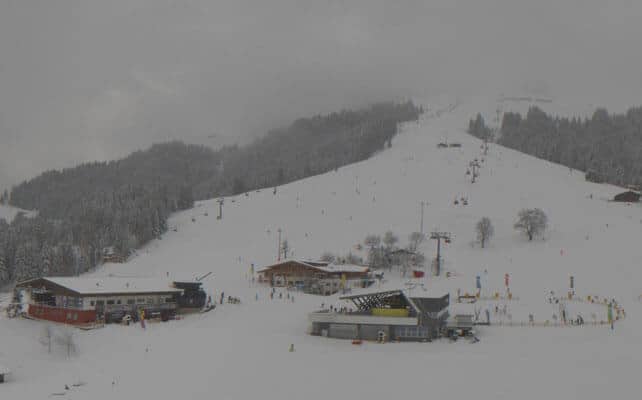 Meanwhile, here’s how it’s looking in Warth, which is connected to Lech in the Arlberg. Here, there was 25cm of fresh snow overnight, and the cover is 116-205cm deep on-piste. 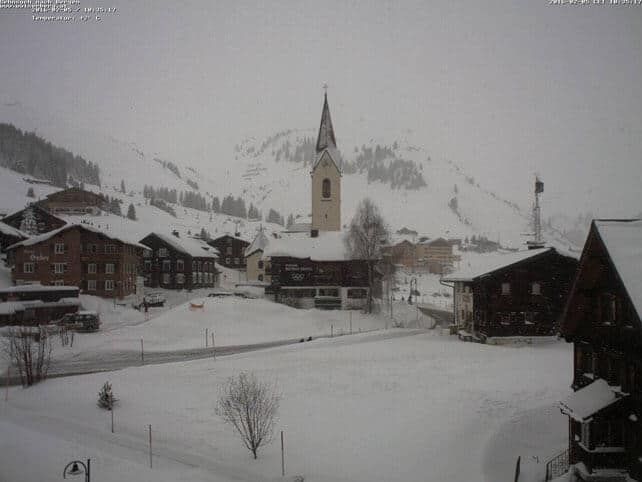 Pictured below is Verbier, where two of our editors are this morning, lucky things. There was 20cm of snow overnight and the cover is 42-205cm deep. “A gorgeous day!” sums it up nicely. 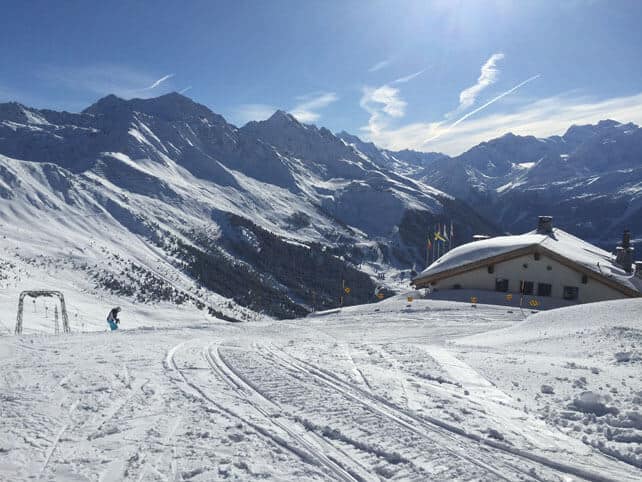 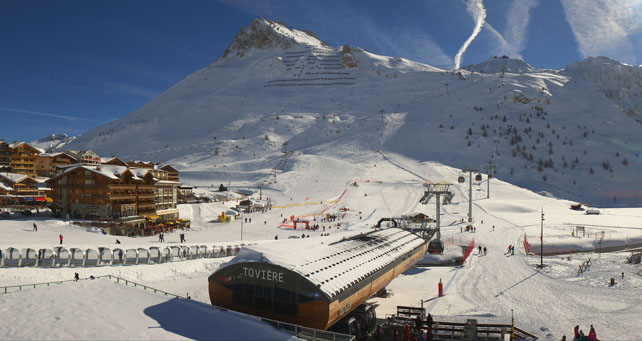 And this is Serre Chevalier, south of Grenoble, which hasn’t enjoyed quite the same snow bonanza as the northern resorts since the start of January – but is expecting significant snowfall on Sunday and Tuesday. Here, the cover is 20-115cm deep. 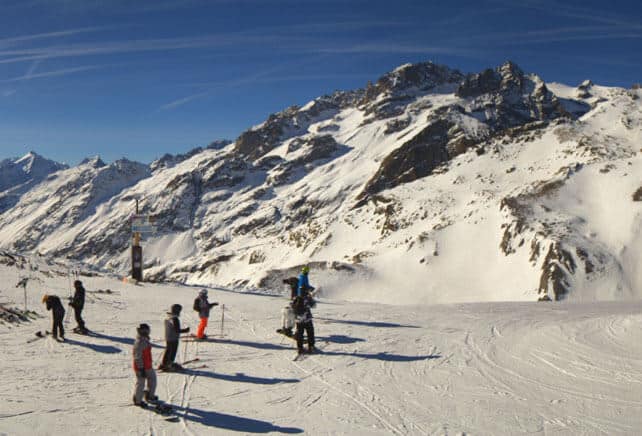 Across the American west it’s been a memorable few weeks. A seemingly endless succession of storms has kept resorts topped up with powder, and there have been some memorable dumps in some resorts. Now, however, Mother Nature is taking a breather. A weak frontal system has added few inches of snow in Colorado, Utah and Wyoming overnight, but high pressure is about to take over, and will bring an extended spell of sunshine and mild temperatures to the region. The time to ski soft, cold wintry powder is right now. Next week, the best skiing will be on the groomed trails.

It’s not yet certain when the sunny weather will break down. The weekend of February 13/14 could see a change. But most forecasters are looking beyond that, to the last ten days of February.

As we all know, American resorts aren’t shy about showing off their snow, and there have been some gorgeous videos and photos around lately. If the sight of other people enjoying powder is going to make you jealous, you’d better look away right now…

Here’s Heavenly, above Lake Tahoe in California, on February 1.

And this is a video of conditions in the last four days in Beaver Creek, Colorado.

And here’s some mind-blowing footage from Jackson Hole. It’s not especially recent, but more than worthy of inclusion because – well, look…